PHOTO: Rory McIlroy Between Buildings During Hole No. 10 Collapse

Share All sharing options for: PHOTO: Rory McIlroy Between Buildings During Hole No. 10 Collapse

Rory McIlroy has not had his best round of golf in Sunday's Masters Tournament action. He's just finished exploring all of Richmond County, with his most remarkable moment coming when he emerged from an alley between two facilities to the far left of hole No. 10's green: 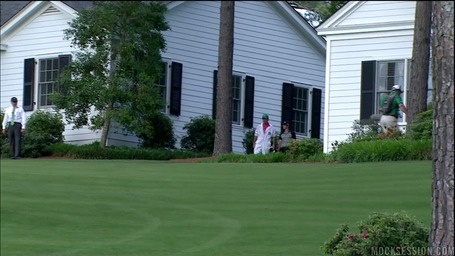 Once he made it out of that mess, he ended up to the left of the green again. He then struck a tree, wound up in the wilderness to the right of the hole, and missed a putt that would've secured a double bogey. The announcers seem to have already given up on him, talking about this round as a learning experience for next year.

All in all, he plummeted from first place to seventh in just one misadventure. It was extremely tough to watch the young player battle through all that, other than the part where he was standing between the two houses, which was hilarious.

For more on the tournament, check out the rest of our 2011 Masters StoryStream. Be sure to stop by SB Nation Atlanta and SB Nation’s golf community, Waggle Room, for more coverage of The Masters.