Rory McIlroy endured one of the most painful lapses in Masters Tournament history on Sunday, which is saying something. Shooting an 80 in the final round, he gave up a four-stroke lead to finish tied for 15th place. Adding WTF to injury, his escape from Augusta National was momentarily delayed by a person Twitter's Trending Topics list is convinced was Shane McMahon, one-time pro wrestler and son of WWE chairman Vince McMahon. 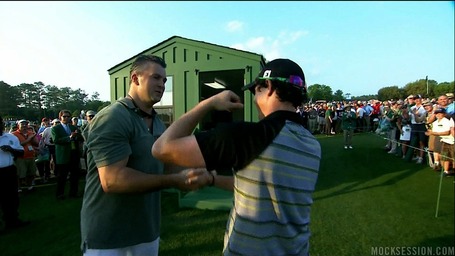 Your guess is as good as mine. Pro wrestling is pretty huge in Ireland and Northern Ireland, from whence young McIlroy hails, so the golfer may realize whose hand he's shaking. Note the specific similarity in their surnames, after all.

Check out the full leaderboard and visit the rest of our Masters StoryStream for a look back at all the action. Be sure to stop by SB Nation Atlanta and SB Nation’s golf community, Waggle Room, for more coverage of The Masters.