Rory McIlroy won the 2011 U.S. Open and it was never really close. Anyone waiting for a collapse is still waiting, and 24 hours after a record-breaking victory, golf's found a new star, and sports fans have a new reason to care about golf.

"Even if it's a 'major' sporting event," I thought coming in, "It's still golf."

So I was a little out of my element when I made the trip to Congressional Country Club on Sunday for the final round of the U.S. Open. People were friendly, but we just weren't on the same page. When one of the USGA Marshals saw me eyeing his gigantic cooler at the third tee box, he happily handed over a bottle of water.

I chugged it, and the bottle made one of those loud crunching noises during one of the golfer's backswings, and BOOM. Dirty looks, embarrassment. "This is what happens when you let these goddamn regular sports fans into the Country Club," I thought. About myself.

About a month ago, someone offered me cheap tickets to the U.S. Open, and I jumped at the chance for two reasons. First, because I'd never been to a golf tournament before, and figured there was no better place to start than the major they were playing about a half hour from my apartment in D.C. Second, because watching Tiger Woods on Sunday at a Major seems like something that should be on every sports fan's bucket list. This was my chance to kill two birds with one stone.

Of course, Tiger pulled out of the Open about a week after I bought my tickets, and my master plan fell apart. Then it became just another golf tournament. A field full of solid, anonymous golfers (to me, anyway), and a bunch of golf fanatics in the gallery—because who else could justify putting up the money and putting up with the crowds at a tournament without Tiger? You have to love golf for golf's sake, and I'm not in that category.

As for the "golf fanatics"... I'm talking about the type of guys who wear golf spikes to the tournament and critique every shot like they're Nick Faldo. These people were all over the course at Congressional. Puffing on cigars, guffawing at inside golfer jokes, and generally playing to stereotypes.

They weren't quite Ted Knight in Caddyshack, but they were definitely the other golfers in Happy Gilmore, of whom Happy notes, "If I saw myself in clothes like that, I'd have to kick my own ass."

But then something horrible happened. Over the course of the day, I became one of them. 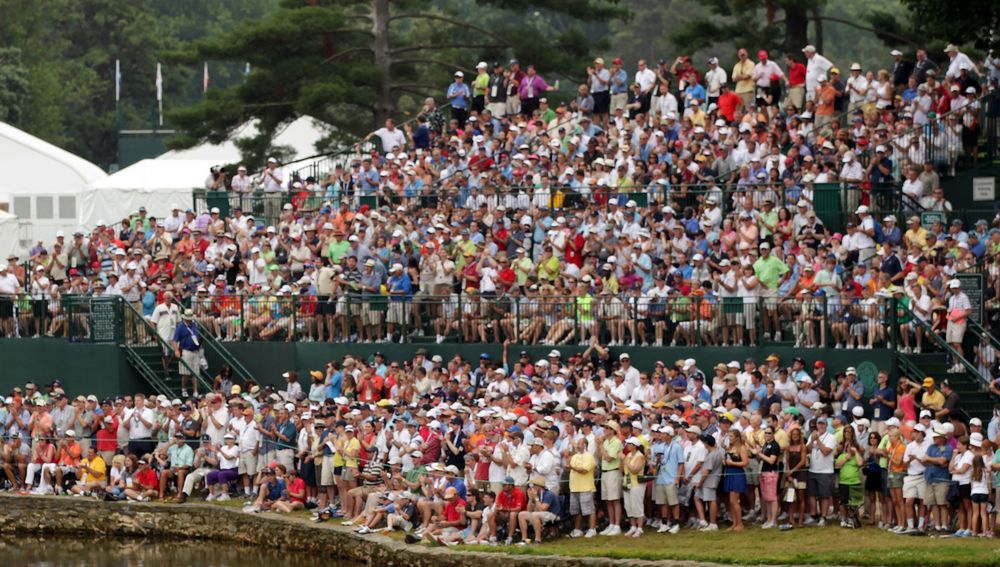 If you can get past some of the ridiculous characters you meet at a golf tournament—the kind of people that hang on Rick Reilly's every word—the rest of the experience is really kind of great. The air smells like a blend of fresh cut grass, sun screen, and beer. The food was better than expected, and the drinks are cheaper than you'd think. The gallery's cheers lead you around the course and keep you updated on what's happening elsewhere. But most of all, everybody's in it together.

On your own, a golf course seems like an endless maze designed to screw with everyone. Every time you think you've figured out the pattern of the holes, you realize, "Oh no, hole six is way over there."

But you can ask around, and people will help you find your way and tell you, "Oh wow, you gotta get to six, it's phenomenal." And it was. Watching on a ridge at six, we got to see the best golfers in the world attack the pin on a par 5 that was ripe for birdies... If they had the guts to go for it. Then somebody started talking about the phenomenal view from the hill on no. 10, and off we went.

Other than the handful of caricatures wearing golf spikes and serious looks on their face, the rest of the crowd's just there to see something amazing happen. And Rory delivered. 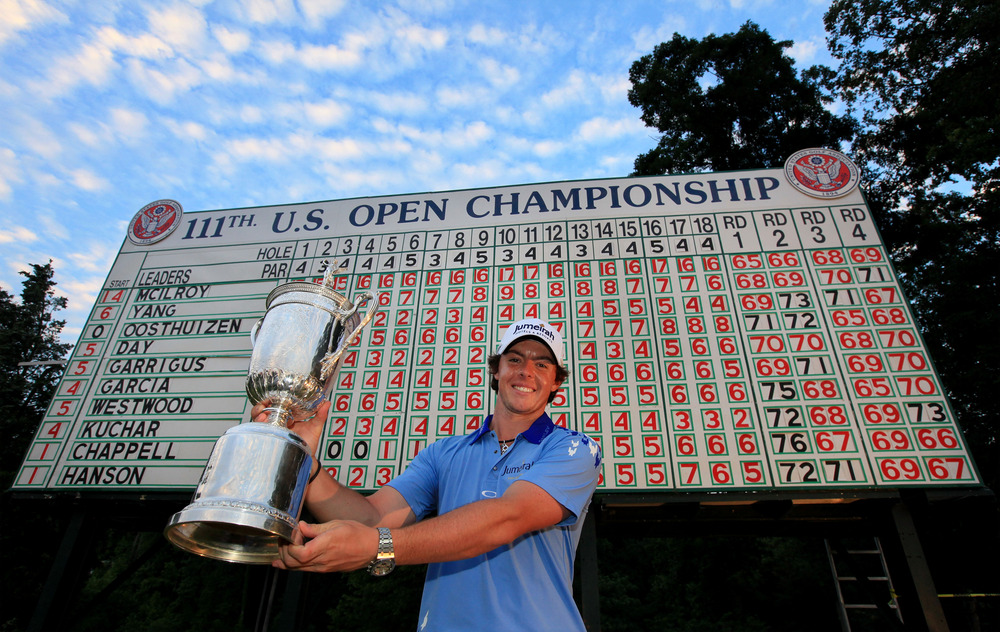 I never got to watch Tiger Woods in his prime--when he was the most magnetic athlete in sports AND the best golfer anyone had ever seen--but Sunday's final round at Congressional had to be close to what it felt like to watch Tiger when he was first beginning to dominate.

Rory McIlroy may never approach Tiger's level of dominance, but not since Tiger has this sport seen a golfer this young dominate like that. Rory was in a league of his own all week long, and you could feel it on Sunday. Even as he left birdies on the course and let Tiger's Major record escape him (19-under was the mark for lowest score in Majors history), the 22 year-old kid from Ireland made everyone else irrelevant.

We were all there to see something amazing, and strictly by the numbers, nobody in the history of the U.S. Open had been more amazing than McIlroy. It really is the "gentleman's game" it claims to be, at least in that sense. In other sports, fans play favorites. In golf, fans cheer for the game itself. Everyone gasps at once when a 30-foot putt looks close, and then they all groan when it lips out.

Where things get really interesting is when a guy makes it all look easy. That's what hooked me on Sunday. I followed Rory from the first hole to the 18th, and the whole time, the buzz surrounding his round was like nothing else Congressional saw all day. Part of that's to be expected; any golfer leading by that much will have everyone captivated.

But the day-long cheers of "Rorrrrr-yyyyyyy" seemed like something different. Instead of cheering a golfer for golf's sake, this kid had transcended the game, at least for a day.

Before Rory's round began, a handful of golfers had dazzled the crowd with magnificent tee-shots on the Par 3 10th, but a few hours later, when it was Rory's turn, you could feel the crowd bracing for something better. And sure enough, he hit his tee-shot within six inches. A hole-in-one would may have been a little more perfect, but the near-miss was more poignant.

When the ball finally stopped rolling, it was like everyone in the gallery did a collective double-take. First we were shaking our heads because we were all positive that ball was going in. Then we shook our heads because even if it didn't... "Holy s--t this kid is incredible."

All afternoon Sunday, the crowd was hooked. And once you get past the initial shock (and disgust, maybe) of watching a thousand golf fans hypnotized into hushed silence, it's easy to fall under the spell, yourself. Or maybe that's just a testament to what Rory did this weekend.

Golf has plenty of young stars right now, but none of them have turned golf fans into awestruck groupies quite like McIlroy did on Sunday at Congressional. Golf finally has a rockstar again. 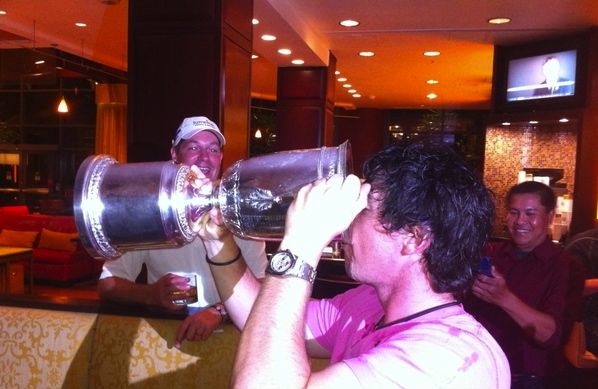 I may have bought tickets to the Open to see Tiger, but this was even better. Instead of watching an aging icon try to recapture some of the magic that made him special, we got to watch Rory McIlroy perform Tiger's magic trick firsthand. He was so good, so cool, that he turned a cynic like me into a full-fledged groupie, trailing him all over the course, and craning my neck to catch every shot. I became one of them on Sunday, mostly because of Rory McIlroy.

Late in the day, running down toward the 18th green to squeeze my way into a decent view of the final hole, I caught myself. "I can't believe this is happening," I thought. About myself, again. The goddamn sports fans have a reason to care again. That's what happens when Rory happens.