Tim Tebow must be counting the nanoseconds until he can call himself a former New York Jet -- especially after the third-string QB could not even make it onto the store floor in a recent Dick’s Sporting Goods display featuring his soon-to-be ex-team. 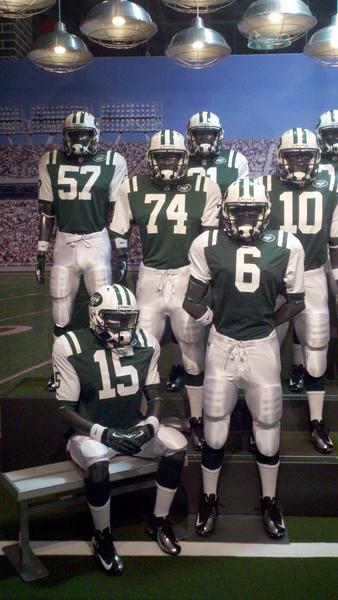 The fortunes of the former cultural icon, whose popularity just a year ago rivaled that of Tiger Woods, circa "Hello, world," have fallen so far that a mannequin sporting his No. 15 sits on a bench as teammates stand above him in the promo at a Dick’s in West Nyack, N.Y. Tebow, who last year copyrighted the buzzword "Tebowing" (for his signature move, in which he drops to a knee and prays), was so far down on Rex Ryan’s depth chart that he hugged the sidelines as both Mark Sanchez and Greg McElroy failed miserably for the woeful Jets Jets Jets.

It’s almost impossible to imagine that 12 months ago sports pundits were claiming that the impact of Tebow’s arrival on the global stage rivaled that of Woods.

"The only sort of comparison I could make is when Tiger burst onto the scene, he brought in people who had never watched a golf tournament before, who had maybe watched one golf tournament a year," CBS Sports chair McManus told Jim Rome as the New England Patriots prepared to dismantle the lefty flinger and his Denver Broncos in last season’s AFC divisional playoff game. "All of a sudden he wasn’t just on the sports pages, he was on the front page of the newspaper....It is a phenomenon and when you have these things, whether it's a Tiger Woods or a Tim Tebow, as you know you sort of hang on and hope the ride lasts a long time."

At the same time, Tebow was climbing faster and earlier in his career than any other superstar -- including Woods, Michael Jordan, or LeBron James -- to the position of "America’s favorite active pro athlete," according to an ESPN Sports Poll.

"To put this in perspective, Tim Tebow rose to the top before the end of his second pro season," Rich Luker, founder and director of the ESPN Sports Poll, said at the time. "It took Tiger Woods three years, LeBron James eight years and Kobe Bryant 11 years. I think we may be at the front end of a new era in sports stars."

Or maybe not. Fast forward to January 2013, and, as the Dick’s prank pointed out, it took Tebow Mania less than a year to flame out. Meanwhile, last time we checked, Tiger was still Tiger.