Hunter Mahan tweets about baseball’s ‘unwritten rules,’ prompting Fox Sports’ ‘analyst’ Tim McCarver to pop off about something else he knows nothing about.

Tim McCarver, who’s due to retire after he finishes torturing baseball fans this postseason, tried to have some fun at golf’s expense during the Tigers lopsided 7-3 win over the Red Sox in Wednesday night’s American League Championship Series. As usual, however, Mr. Obvious made viewers cringe with his off-the-mark "analysis" of the game’s etiquette. 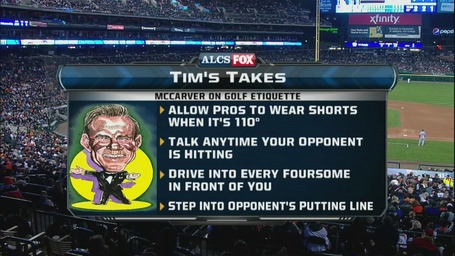 Fox Sports producers alerted Joe Buck’s mouthy commentator about a tweet from PGA Tour star Hunter Mahan, from a day and a half earlier, about the hullabaloo surrounding the Dodgers’ hot shot Yasiel Puig, whose over-the-top celebrations have rubbed some opponents the wrong way.

If players are so upset at Puig celebrating a triple or clutch hits then get him out. I'm tired of hearing about baseball's unwritten rules

McCarver, whose fake Twitter pages hilariously poke fun at the antiquated announcer’s penchant for stating and restating what you just witnessed over and over until you want to stick sharp sticks in your ears, tried to have fun with golf’s "unwritten rules." One problem (other than Timmy using up more hot air) was that his examples actually fall under the categories of actual rules (the pants thing) and etiquette, which the USGA also helpfully spells out for nitwits like the former Cardinals catcher.

Whether this was a response to McCarver’s golf-related jabbering or any other attempt at witticism from his get-this-doofus-outta-my-booth partner, Buck’s response said it all (golf clap/Deadspin): 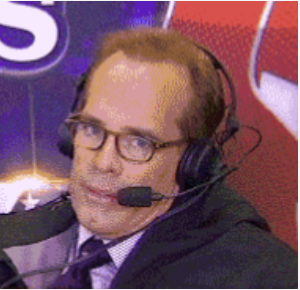 Can't wait for the big U.S. Open move to FOX!