An up-and-coming Canadian could be the key to an International upset in Columbus.

Canada is back in the Presidents Cup thanks to a red-hot season from Graham DeLaet. Mike Weir represented America's neighbors to the north for five straight Cups from 2000 to 2009, but he's no longer the player he once was.

Canada went without a team rep in 2011 in Australia, but DeLaet stormed through the summer to lock up an automatic spot late in the FedExCup to ensure a strong Canadian contingent for the doable trip down to Columbus for the weekend.

Player previews for both 12-man teams 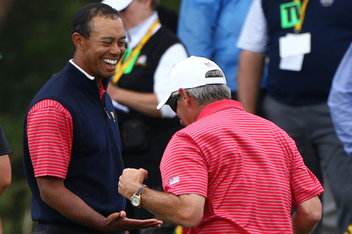 As Presidents Cup week continues, we'll roll individual previews for all 24 players competing in Columbus. Do the Internationals have the depth to make this competitive again?

DeLaet may be relatively unknown to most casual golf fans, but he may be playing better golf than anyone in the the 24-man competition this weekend. He was simply automatic this year on the PGA Tour and a good bet to be somewhere on the first page of the leaderboard. He took that consistency up a peg in the playoffs, finishing tied for second at The Barclays and solo third at the Deutsche Bank to secure his place on the roster.

DeLaet isn't just a flash in the pan, either. His form is probably the best of the International group and he's coming off a season in which he lead the PGA Tour in driving and was tied for the lead in ball-striking. It's hard to call that a fluke and it's the perfect game for Muirfield and match play.

It's unclear who DeLaet will partner with this week so he could rotate around with some of the other rookies. Given his form this season, however, DeLaet should be the star and anchor of any two-man team he's on -- even if he's never played a team match play event before. If the Internationals are to pull off this upset, he'll be the one to watch and likely be a catalyst for it.

Qualified: Automatic spot No. 8 of 10

Presidents Cup Match Play Record: This is his debut.