Golf Channel analyst Brandel Chamblee issues a mea culpa to Tiger Woods for suggesting the world No. 1 was a cheater.

Tiger Woods received an "F" for his 2013 season and the suggestion that he was a cheater in Brandel Chamblee’s annual PGA Tour "report card." On Tuesday, seven days after the Golf Channel analyst wrote a column that stoked controversy and the threat of a lawsuit from Woods’ agent, Mark Steinberg, Chamblee took to Twitter to apologize for his comments.

Golf is a gentleman's game and I'm not proud of this debate. I want to apologize to Tiger for this incited discourse.

Chamblee, a self-appointed Tiger scold, has been on Woods’ back about his personal life, his hiring of swing coach Sean Foley and a number of other issues involving the world’s No. 1 golfer. With his Oct. 15 Golf.com article, the one-time tour winner overlooked Woods’ five-win season and, instead, focused on his serial penalties over the year, hinting that the 14-time major champion, who went major-less for the fifth straight campaign, had purposefully violated the Rules of Golf in 2013. 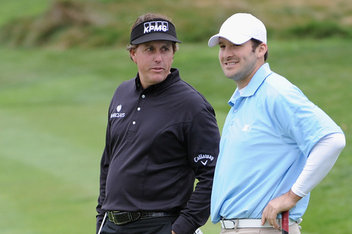 "When I was in the fourth grade, I cheated on a math test and when I got the paper back it had '100' written at the top and just below the grade, was this quote, ‘Oh, what a tangled web we weave when first we practice to deceive!’ It was an oft-quoted line from the epic poem ‘Marmion’ by Sir Walter Scott, and my teacher's message was clear. Written once more beneath that quote was my grade of ‘100’, but this time with a line drawn through it and beneath that an F. I never did ask my teacher how she knew I cheated and I certainly didn't protest the grade. I knew I had done the wrong thing and my teacher the right, but I never forgot the way I felt when I read that quote.

"I remember when we only talked about Tiger's golf. I miss those days. He won five times and contended in majors and won the Vardon Trophy and ... how shall we say this ... was a little cavalier with the rules."

Chamblee proceeded to flunk Woods out of his self-righteous ethics class, and Steinberg followed shortly thereafter with veiled threats of legal action against the outspoken TV yakker.

Chamblee, about whom Golf Channel would not comment, said no one forced him to issue his mea culpa, according to an email to SB Nation from a network spokesperson

And no - I was not asked to apologize

What brought me here was the realization that my comments inflamed an audience on two sides of an issue.

My intention was to note Tiger's rules infractions this year, but comparing that to cheating in grade school went too far.

• Phil can fire a football, is a ping pong master