Tiger Woods speaks out for the first time since Golf Channel analyst Brandel Chamblee intimated the world No. 1 was a cheater. Hint: he's not happy about his nemesis' comments and suggests the network should discipline the golf yakker in some way.

While sports fans were glued to another bizarre ending to a World Series game and watching the Packers run roughshod over the Vikings on Sunday night, Tiger Woods challenged Golf Channel to do something about analyst Brandel Chamblee’s veiled cheating accusation aimed at the world No. 1 player.

''All I am going to say is that I know I am going forward,'' Woods told the Associated Press' Bernie McGuire and Doug Ferguson about the brouhaha Chamblee stirred up by opining in a recent Golf.com column that Tiger had been "a little cavalier with the rules" this past PGA Tour season. Tiger made the comments overseas in China, prior to losing an exhibition one-on-one game against Rory McIlroy. 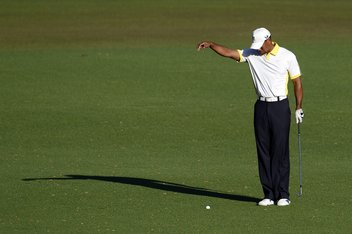 After reaffirming his cheating implications to the AP, Brandel Chamblee sent out a series of Tweets in a half-hearted attempt to apologize for the drama.

In handing out an "F" to Woods for 2013, in which Tiger won five times but went major-less for the fifth straight year, Chamblee hinted that the 79-time PGA Tour winner had deliberately flouted golf’s mandates and compared the golfer's four very public penalties to his own cheating in elementary school. It was, not surprisingly, an implication that kicked up a load of controversy, and while Chamblee said last week, in the requisite but flaccid mea culpa, that he went over the top with the correlation, Woods was not satisfied with the one-time tour victor apologizing for what he termed "this incited discourse."

Mark Steinberg hinted he might sue Chamblee, though for what, exactly, Woods’ agent did not make clear. Woods, however, took it directly to Golf Channel. He issued something of an ultimatum to the network (for which Chamblee pontificates though his controversial remarks appeared on another outlet's website), which chooses not to comment on the fracas.

"The whole issue has been very disappointing as he didn't really apologize and he sort of reignited the whole situation."-Tiger Woods

''But then, I don't know what the Golf Channel is going to do or not. But then that's up to them," Woods said. "The whole issue has been very disappointing as he didn't really apologize and he sort of reignited the whole situation.

''So the ball really is in the court of the Golf Channel and what they are prepared to do.''

The violations in question -- the two-shot penalty in Abu Dhabi, the near-DQ at Augusta, a drop at TPC Sawgrass that sent Johnny Miller spinning off the rails, and another two-shot penalty during the BMW Championship when his ball moved -- have been well-documented.

Chamblee, for his part, has earned the distinction of Woods’ chief scold, taking on Tiger for his personal failings and massive swing change. He crossed the line, in many observers’ views, when he implied that Woods cheated.

While some pundits have wondered if Woods would boycott Golf Channel’s post-round interviews, Tiger did not spell out actions he wished Golf Channel to take, or what he would do if the broadcaster declined to carry out any discipline on Chamblee.