Tiger Woods looks ahead to going after the win records of Sam Snead and Jack Nicklaus, but he has no interest in targeting one that Arnold Palmer holds. The world No. 1 will kick off his 2014 U.S. season at Torrey Pines.

Tiger Woods, as even casual observers of the world’s top-ranked golf enthusiast are aware, has one hallowed record he could break in 2014 and another he’s coveted since he was a kid and may yet set. There’s one mark, however, that has hovered well under the radar screen, which is fine with Tiger since the world No. 1 has no interest even in going for it.

"Let me put it to you this way," Woods, following Sunday’s playoff loss to Zach Johnson at Sherwood CC, told reporters about whether he had Arnold Palmer’s 50 consecutive Masters starts in sight. "I'm not going to beat Arnold's record. I'm not playing that long. That’s for sure."

Woods won five times on the PGA tour in 2013, so it’s well within his skill set -- and expectations -- to overtake Sam Snead’s all-time career achievement of 82 tour victories sometime next year. Though he hasn’t captured a major championship since the U.S. Open in 2008, Tiger remains relentless in pursuit of Jack Nicklaus’ feat of 18 major titles and likes his chances on Tiger-friendly venues in 2014. 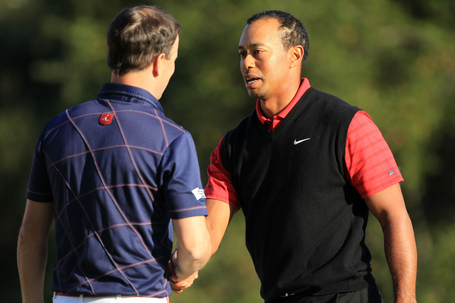 "As far as the major championships, I've won at every one [Augusta, Hoylake for the British Open, and Valhalla for the PGA Championship] except for Pinehurst [site of the U.S. Open in June], and I'm trending in the right way. I've finished third [at the Open in 1999], second [2005]. You get the picture, right?" Woods quipped to reporters last week.

"So I'm looking forward to the major championship venues this year," said Tiger, who, in addition to four Masters victories, won the 2000 PGA at Valhalla and the 2006 British Open title at Hoylake. "They have set up well for me over the years and I look forward to it."

The 84-year-old, seven-time major champion is now among the old guard, along with Jack Nicklaus and Gary Player, who perform the Augusta equivalent of throwing out the first pitch at a ball game when they strike the ceremonial first drives to kick off the Masters. The Big Three also thrill fans by playing in the annual par-3 tournament on the eve of the actual tilt.

Woods expects to honor the tradition by taking a cut for show when he’s in his dotage, but don’t expect him to enter the field once he’s past his peak.

Recognizing that all athletes face that inevitable time when their skills have eroded so much they can no longer really contend, Woods said he’ll cross Hogan’s Bridge when he comes to it but he’s nowhere near that landmark yet.

"I know what it takes to prepare to win and what it takes to go out there and get the job done, and there’s going to come a point in time where I just can’t do it anymore," Woods said. "I’m a way away from that moment in my sport, but when that day happens I’ll make a decision and that’s it."

As for the other two standards he hopes to set, Woods could surpass Snead early next year.

"The easier goal is going to be getting to Sam's record; you could get to there basically by playing the first three events of the year and win three in a row," Woods told Sky Sports ahead of last week’s Northwestern Mutual World Challenge swan song at Sherwood.

He'll have a good shot at notching that first W of 2014 when he launches next year's campaign with a defense of his Farmers Insurance Open in January.

Woods has also noted often that Nicklaus was 46 when he won his final major title and Sunday pointed to several elder statesmen -- Snead, Tom Watson and Fred Couples among them -- who have lifted trophies "well in their late 40s and 50s." If history is any guide, such examples afford the 14-time major winner several more years to bank those Ws.

While Woods expects to "be there" on the leaderboard as long as his abilities allow him to compete, he hoped to bow out of the running gracefully while continuing to respect the custom of that opening drive.

"I’ll be on that first tee starting out the event hitting a ceremonial drive as an honorary starter, I’m sure," said Woods, who added he would quit before he can’t see the flag with his second shot.