BOSTON — Today is National Golf Day, but I don’t feel like playing.

I’ve lived just outside Boston my entire life, but for a few semesters here and there during college and the 10 years gripped by Potomac Fever in Washington, D.C. As a devoted New England fangirl, I’ve experienced the extreme highs (three Patriots Super Bowls, two Red Sox world championships, the Celtics’ Bill Russell/Bob Cousy/Red Auerbach/Larry Bird years, the Bruins' Stanley Cup triumph) as well as the soul-sucking lows (see: Sox, pre-2004) of what it means to care way too deeply for all-athletic endeavors, Boston-style.

Nothing prepared me -- or any other sports zealot or citizen of the Commonwealth and beyond -- for what happened Monday at my town’s premier sporting event, the Boston Marathon. How could it? From a purely sports perspective, losing the American League Championship to the Yankees in 2003 was as bad as it got around here since that baseball leaked through Buckner’s wickets in 1986. After yesterday, it’s difficult to remember what the big deal was when Grady Little left Pedro in for one pitch too many, or McNamara did the same with his wobbly first baseman. 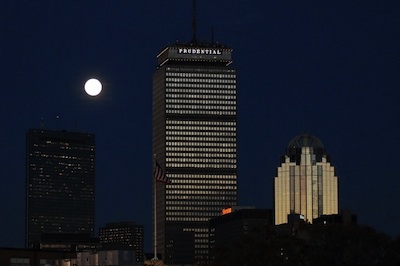 I grew up in Lexington, where Patriots’ Day was, and still is, a really momentous occasion. From the sunrise reenactment of the skirmish on the Battle Green that launched the American Revolution, to the annual parade, to the day off from school, kids in Massachusetts learned early that April 19 (the actual date, in 1775, when the “shot heard ‘round the world” was fired) was special.

Patriots' Day around these parts also kicks off the unofficial start of spring after a long, miserable winter, with the Boston Marathon, and the Sox marking the occasion by playing their annual Patriots' Day game at the unheard-of hour of 11 a.m. This year’s tilt at Fenway (does anyone care, or know, who won?) ended less than an hour before explosions rocked the finish line in Copley Square, just down Boylston Street from the Prudential Center, where I worked and watched the end of the run back in the late ‘80s.

I was nowhere near Boston when the mayhem went down yesterday. In fact, I had just completed a spectacular 27 holes of golf, two hours away in western Massachusetts, when I checked for messages on my iPhone and, in an instant, everything changed. I have no eyewitness account to offer, no inexpert analysis about why here, why now, and how we’ll all get through it; all I have are the horrifying images my wife and I -- along with so many fellow denizens -- watched our local newscasters report on late into the night, and gratitude to so many from so far who texted, emailed, and tweeted to find out if we were all right. Thanks for that, you all.

Today, there seem to be no words to express adequately the horror and grief of the tragedy that befell so many who --until 2:50 p.m. Eastern Daylight Time on April 15 -- were celebrating an exhilarating day of sportsmanship and joy, so we’ll let New England native Keegan Bradley, the 2011 PGA champion who went to high school in Hopkinton, Mass., where the Marathon starts, for now, have the last, poignant word, which he tweeted late Monday night.