Tiger Woods fervently disagrees with the two-shot penalty he incurred during the BMW Championship, but Friday’s rules breach was just the latest in a season filled with infractions.

Tiger Woods’ 2013 season has been notable for several reasons: his five PGA TOUR victories and ascension back to the top of the World Rankings that make him the favorite to earn player of the year honors, his fifth consecutive campaign without winning a major championship and a series of controversial rules violations that have had some pundits calling foul.

"This one will raise a few more eyebrows among the players, that’s all I’m gonna say," NBC’s lead analyst Johnny Miller said during Saturday’s broadcast about Woods’ most recent incident involving a golf ball in the trees.

The situation in question arose during the second round of this week’s BMW Championship after Woods’ approach shot to the par-4 first hole flew the green and ended up among leaves, sticks and other woodsy foliage behind the putting surface. As happens more often with the 14-time major titleholder than with any other PGA TOUR golfer, a video camera was on the spot to capture each and every Tiger twitch (video of the moment in question).

In this case, the PGA TOUR Entertainment videographer rushed his work to his director, who contacted Andy Pazder, the tour’s chief of operations, who reached the VP of rules and competitions, Slugger White, who delivered the bad news to Woods before the golfer signed his scorecard. Woods disagreed so vehemently with the two-shot penalty assessment that he reportedly went all Kevin Brown and used a wall for a punching bag.

"He was a little disbelieving," White told reporters on Friday after he and Woods reviewed video that showed the golfer’s ball moving ever so slightly as he tried to remove nearby loose impediments before hitting his third shot. "How's that?"

Golfweek.com’s Jeff Rude reported a "loud thump" inside the scoring trailer before a fuming Woods emerged after learning that the double-bogey six to start his round was actually a quadruple-bogey 8 because he breached Rule 18-2a. Tiger stalked past reporters, who grilled a still-defiant Woods on Saturday. 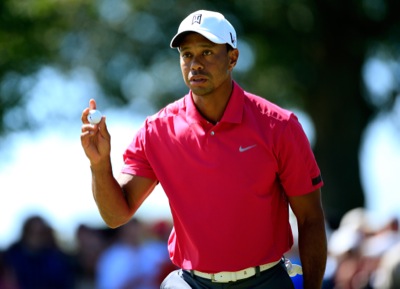 Check out SB Nation Golf for the latest on Tiger Woods, the FedExCup Playoffs and the rest of the PGA.

"You know, it's one of those things where I thought the ball oscillated, and I thought that was it. I played the shot, played the round, and then Slugger and Tyler [Dennis, VP of competition] in there, they replayed it and gave me [a two-shot penalty]," Woods said. "I was pretty hot because I felt like, as I said, nothing happened. I felt like the ball oscillated and that was it. I played the rest of the round grinding my tail off to get myself back in the tournament and then go from five to seven behind, that was tough."

Woods was insistent that the ball did what he said he witnessed, despite what NBC/Golf Channel analyst Dan Hicks averred was "no doubt" that the ball dipped 1/16th of an inch and turned after Woods attempted to move a twig in front of it.

Friday’s incident was the latest of many that have dogged Woods this season and threaten to steal the headlines from his multiple wins. There was the improper drop in Abu Dhabi that resulted in a missed cut, the much-scrutinized and hotly debated near-DQ at the Masters, and a situation at The Players Championship that resulted in more forensic analysis and incredulity from Miller.

"That Tiger drop was really, really borderline," Miller said after Woods found the water hazard off the 14th tee in the final round at TPC Sawgrass in May. "I can't live with myself without saying that."

While Miller hinted that Woods’ most recent infraction would give his colleagues pause, Jim Furyk and Steve Stricker, at least, indicated it was not an issue.

"It is unfortunate that he's been at the center of this about three times, I think, this year," Stricker said Saturday. "I don't know why, if it's just because all the TV is on him all the time or what, but I didn't see it yesterday."

Furyk also observed, as Scott Piercy told SBN recently, that any other golfer facing the same situation would do so out of the public eye.

"Tiger now, the scrutiny is that he's on television, and every step, every little thing he does is not only watched but then everyone has to weigh in on whether it was good or not or bad or every little swing and every little this, that," Furyk said to the media. "I thank the Lord that I don't have to live that way on a daily basis. ... I wouldn't want to live my life like that."

As to how heated his post-penalty chat with White had gone, Woods termed it "a very good discussion. I’ll end it at that."

Woods, by the way, will enter the TOUR Championship on Thursday atop the FedExCup standings, despite an 11th-place finish Monday at the BMW. Woods, who uncharacteristically went out for the Monday final round in all black, sans his traditional Sunday red, ended up at 9-under for the week, seven shots behind winner Zach Johnson.

• How did one judge score Mayweather vs. Canelo a draw?