Grand prize $10 million check, Player of the Year honors on the line in FedExCup finale

All eyes will be on Tiger Woods, Adam Scott and Phil Mickelson at East Lake this week, as the three contenders for player of the year compete in the PGA Tour’s last hurrah of 2013, the Tour Championship.

Share All sharing options for: Grand prize $10 million check, Player of the Year honors on the line in FedExCup finale

Tiger Woods believes he’s earned another for his collection. Adam Scott says it would be an honor just to be nominated. And Phil Mickelson probably hopes whatever bug bit him last week is gone by kickoff on Thursday so he can score serious consideration for player of the year glory.

Numbers 1, 2 and 3 in the world will play a game within the game this week at East Lake, where all 30 survivors of the previous three FedExCup playoff games will vie for bragging rights and the $10 million kitty that goes to the winner of the PGA Tour’s season-ending Tour Championship.

It’s no mystery what top-seeded Woods, Scott, who's third in the standings, and the other three contenders in the top five entering the cup finale must accomplish to collar the cup: just win, baby. Should Woods or Scott do just that, he would likely earn the votes of his peers for the coveted year-end kudos.

"The player of the year award is something we hold dearly because it’s the respect of our peers, it’s voted on by our peers," Woods told reporters on Wednesday ahead of his 2 p.m. ET tee time with Henrik Stenson, winner of the Deutsche Bank Championship and second on the FEC scoreboard. 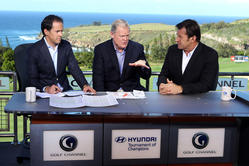 "Having a year where they think that you were deserving of the player of the year, it’s pretty special," Woods noted. "I’ve had my years over the course of my career and hopefully this will be another one."

Woods, with no majors but five tour Ws to his credit for the 2013 season -- as well as the No. 1 ranking in the world and in the playoffs -- comes into the event the favorite to grab his third FedExCup trophy and sew up recognition for his 11th PoY title.

"I’ve won some big events this year: two World Golf Championships, a Players [Championship] and Jack [Nicklaus] and Arnold’s [Palmer] tournaments [the Memorial and Arnold Palmer Invitational], so I think that's been a pretty good year," Woods said. "A lot of people thought I would never win again [after off-course issues and injuries sent him to the sidelines], and here we are with some more wins."

Scott and Mickelson each own a major as well as another victory this season. Steve Williams’ employer became the first Australian to win a Masters when he bested Angel Cabrera in a playoff in April. He also took the first playoff game at The Barclays.

“I really need to win [this week] to even throw my name in the hat there,” Scott said in his pre-tourney press conference Wednesday. “Then it could be possible.”

Lefty, who struggled to a T33 at the BMW Championship after suffering from "something I ate" following the first round in Chicago, captured his first British Open with a spectacular final-round 5-under 66 at Muirfield.

"It would be hard not to give him the vote," Scott said about the PoY chances for Mickelson, who ranks eighth in points, should he raise the cup on Sunday. "Then he has three wins with a major, and Tiger has five wins, and Phil has the FedEx Cup. I think it's a pretty strong case to say 'Phil.' But if you feel like five wins is more impressive, you can put Tiger ... I think you've got a strong case to argue for both."

Tour golfers will cast their PoY ballots between the end of play at East Lake and Oct. 26, with the honor conferred the next day, according to PGATour.com's Brian Wacker. Should the tally not favor Woods, Wacker observed, such an occurrence would mark the second time Tiger had more victories than anyone else but failed to win the electoral college.

In fact, as Wacker noted, Woods was the most recent player to record more victories in a year than any other competitor and walk away without the season-ending accolade, a curiosity that has happened three times. In 2008, Woods won four tournaments, but went on the disabled list for the rest of the campaign after earning the U.S. Open on a broken leg and lost out to that year’s two-time major winner Padraig Harrington.

To Scott, a triumph in this year’s final set for any one of the Big Three could seal the PoY deal.

"I think winning is a big thing," he said. "I think the history of whoever's won player of the year has had multiple wins, and that carries a lot of weight."

"This tournament has a lot of value to it," he said. "There are guys who’ve won a couple times but they’ve had major championships in there. I’ve won five times, but this week has a lot to do with it and up for grabs is the player of the year."

Woods made it clear how important this week was to him.

• Did Mickelson play his way out of Player of Year race?