A disastrous seven-hole stretch for Tiger Woods results in his highest score ever at Torrey Pines, sending him home early to start his 2014 season and reigniting the examination of a new swing that's yet to deliver a major.

Tiger Woods imploded in stunning fashion on Saturday at the Farmers Insurance Open, carding seven straight bogeys or worse for a seven-hole stretch played at 9-over. The collapse, in which it appeared Woods simply checked out, resulted in a Tiger tumble to second-last place of the remaining field and means Woods will not play on Sunday, thanks to a second 54-hole cut to trim the field to the final 70. 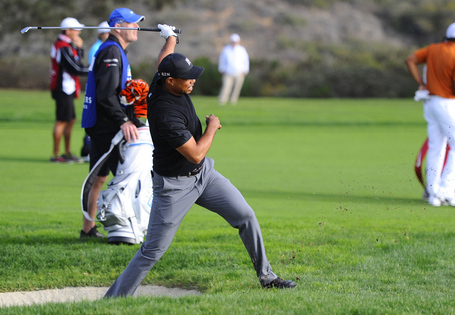 A look back at the worst rounds of Tiger Woods' career, and where this past weekend's performance stands.

Since his return from a self-imposed break for personal scandal, Woods' game has fluctuated wildly, but that seemed to be set aside last year with a five-win season. Saturday at Torrey Pines, however, was a startlingly horrific stretch of golf from the No. 1 player in the world, and will reignite the rollercoaster of debate and scrutiny right at the start of Tiger's 2014 season.

Woods, quite simply, was an unmitigated disaster on a Torrey Pines South Course that he's owned throughout his career, including last year when he debuted with an inevitable and convincing victory. The day started well enough for Woods, who had birdied two of his last three holes when he arrived at the 18th tee (his 9th hole of the day). But that's when the unraveling started, as he tried to get home in two on the par-5 with an aggressive and dramatic fade over the water protecting the front of the green. The result was a shot that came up some 10 yards short of the putting surface, and elicited an "Oh my goodness!" from commentator Nick Faldo.

"Oh my goodness." Tiger went for a dramatic fade. Didn't quite work out. https://t.co/XZLiOukjTb

After rinsing that approach, he dropped and tried to go after the tough back pin but put his ball in the bunker. A visit to the drink and the beach on consecutive shots is how you double bogey a relatively benign par-5.

Tiger's work on those par-5s is his most reliable route to victory, particularly at this event, which he has won seven times. As Emily Kay noted this week, Woods has owned this course by making birdie or eagle a ridiculous 67 percent of the time he plays the par-5s. But he did not post a single red number on his first eight par-5s this week, and then Saturday he decided to just go the other way with bogeys or worse. He finished 0 for 12 on the par-5s this week.

The water ball and double bogey on No. 18, however, was just the beginning of an astonishing stretch of golf we've never really seen before, and probably won't again, from the best player in the world. Tiger backed up the double on No. 18 by making the turn with another double on No. 1. At that point, his chances of contending were long gone and now the prospect of missing the second cut came into play. Woods locked up that fate by reeling off five straight bogeys to go 9-over during a numbing seven-hole, two-hour window of abominable golf.

I mean this is surreal, and has been for almost 2 hours. Worst-case scenario playing out for about 80% of shots the last 7 holes.

Tiger would finally break the bogey streak at No. 7 (his 16th hole of the day). Woods stuck his approach shot on top of the pin to set up a good birdie chance, which he finally converted to stop the momentum towards a career-worst score (an 81). After making the putt, Woods gave a facetious bow to the crowd:

Tiger cleaned up the last two holes of his day, and weekend, with a two pars to get into the clubhouse with a 79, two shots worse than his previous career high at Torrey. The round matches his second-highest ever as a pro, and since his return from the scandal, only the Sunday 78 at Firestone in 2010 would be a comparable lowpoint. The final ugly scorecard (via PGATour.com):

It was clear Woods mentally checked out after the back-to-back doubles, but to not make it to Sunday was unimaginable at the start of the week. The Tour will now finish up the final round without Woods and Phil Mickeleson, the local San Diego favorite who had to withdraw Friday night because of back issues. They were expected to anchor Sunday's coverage but an injury and a round pushing 80 sent the two biggest superstars in the game home early.

I wrote at the start of the tournament that Woods has little to gain anymore from these non-major events, especially the ones like Torrey Pines that he's dominated his entire career because they're "comfortable," as the critics put it. He may not have much to gain, but he can still lose plenty and Saturday's implosion will only fire up the overanalysis of his swing under Sean Foley and why he's no longer the old Tiger.