Tiger and Hank Haney engage in a bit of tit for tat after Woods gets off to the worst two-tourney start in his career.

Tiger Woods will "absolutely" win more majors, according to his most recent former coach, but that does not mean Hank Haney believes the world No. 1 is currently on the right path to grand slam victory No. 15.

Absolutely he does @dmbpj25: honestly, do you think tiger wins another major? I do not with this swing that looks late almost everytime.

Haney, whose split from Woods in 2010 was anything but amicable, has offered his opinions on the successes and failures of his ex-student via a variety of media. He told just about all -- professionally and personally -- about Tiger in his book, "The Big Miss," has tweeted about his lack of preparation for majors, and now has his own Sirius XM radio show from which to pontificate.

I watched it for 6 yrs, I question Tiger's preparation, he doesn't practice his putting or short game enough on site at unfamiliar courses

Woods had pretty much kept his views on Haney’s criticisms on the down low until recently, after he got off to the worst two-game start in his career that began with a 54-hole missed cut at Torrey Pines and, oddly -- since he’s been working with Sean Foley since 2010 -- blamed his old guru for his wayward swing.

Noting that he had fallen back into routines he picked up under his "last coach," Woods said he and Foley were working on fixes that would let him hit cut shots with less difficulty.

"It's one of my old habits, getting back into the old pattern," Woods told reporters during the Dubai Desert Classic. "Just got to make sure I stay away from it because it's not good."

Is Tiger too ripped? 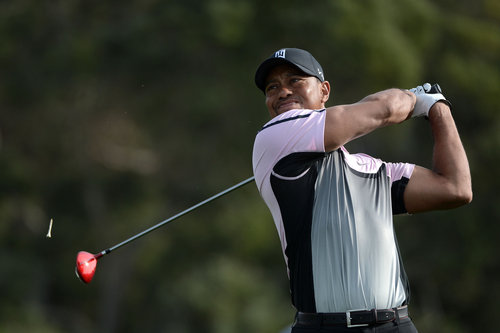 He was just three rounds into the season, but Tiger's swing was already under scrutiny, with former coach Hank Haney asserting he's worked out too much and Golf Channel's Brandel Chamblee saying he's swinging like an old man.

Tiger’s remarks came after Haney, in a reply to a radio listener’s query, blamed the golfer’s maniacal workout regimen for his woes.

"My opinion is he did too much [working out]," Haney said on air after TV analysts covering the Farmers Insurance Open noted that Woods appeared far more bulked up than he had in the past. "You need to be in shape [for golf], you need to avoid injury, but my opinion is he really overdoes that."

Tiger's struggles off the tee were a constant subject of conversation in Dubai.

"I've been hitting hot pulls and every one of those things has some serious heat on it, which is nice, but I just need to get it online," he explained. "I would rather hit the hot pull than the big flame-out, crop duster to the right. The hot pull is fine because it's easy to fix; it's getting down there and just have to aim it a little bit more."

And, as we noted recently, Haney was off and running, talking "hot pull" and "crop duster" with his nearly 98,000 Twitter followers.

TigerShade "@HankDHaney: sounds like a hot pull and a crop duster @edward_stroko:Most of my tee shots slice hard right. My irons pull left."

Woods planned to return to his Florida home after a quick trip to India for an exhibition match and work on his putting in preparation for what observers believe will be his next start, at the Honda Classic later this month.

"I'm probably going to work on my lag putting. My lag putting needs to be a little bit better than it has been, get the speed on those putts," Woods said after carding a 1-under 71 in the final round at Emirates Golf Club. "I'm hitting my lines. I just don't have the speed just right. Concentrate a little bit more on speed."

In the meantime, Haney took his skills to the Tiger-free Monterey Peninsula, where he cast a watchful eye over Patriots coach Bill Belichick, among other celebrity amateurs who are off and running at the Pebble Beach National Pro-Am.

Had a good 2 days at Pebble Beach w @TaylorMadeGolf helping some of the amateurs, lots of crop duster shots that #SLDR fixed #loftup

And we’re back to Tiger.

• 6-year-old shows Tiger how to hit an iron