A few key stats for winning the Masters at Augusta National

Tee shots and putting get all the pub, but what part of the game is essential for getting a green jacket?

Share All sharing options for: A few key stats for winning the Masters at Augusta National

If you pay attention to golf Twitter, you've likely heard of or seen Shoshana Agus-Kleinman. A large part of her steady stream of informative golf tweets centers on the growing statistical and analytic work around golf. While Augusta National does not utilize the PGA Tour's ShotLink system, which records reams of data on every shot on Tour, we enlisted Shosh to try and extract a few informative numbers on what it takes to succeed at the Masters. Follow her on Twitter throughout the tournament @ShoshEAK.

So you say you want to win the masters?

Well here is what you have to do: putt well you say, sure, that would be nice. Hit the ball far? Much like putting, that's useful. But if you really, really want to win, what you NEED to do is hit greens in regulation. If a player is not near the top of the field in greens in regulation, he is (probably) not winning the Masters. It is as simple as that ; the execution on the other hand ...

Don't believe me? Have you been listening to pundits all week talking tee shots and putting? Well in this case, the numbers do not lie. 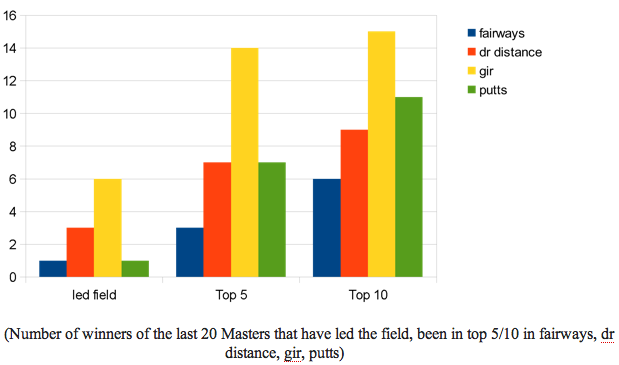 Over time, the trend has become even more pronounced. In the last 10 years, the winner has only finished outside of the top five twice, and each time he was still inside the top 20. Over the same period of time, winners have been both at the top and bottom of the field in driving distance; generally toward the top, but not at the top in total putts; and toward the bottom of the field in driving accuracy.

So really, you are telling me that putting doesn't matter?

Well, not entirely. The Masters, like the other majors, does not use ShotLink, the PGA Tour's excellent system that measures every shot. Thanks to ShotLink at regular PGA Tour events, we have a stat called strokes gained putting that takes into account length of the putt when determining how well a player is putting that week.

Sadly, we do not have access to that statistic at the Masters. Almost by default a player who hits more greens in regulation is going to have more total putts than a player who hits fewer greens in regulation. Putting is (probably) still important. But what I am driving at is that if that first putt is not for birdie, your favorite player (probably) is not leaving Augusta National with a green jacket. 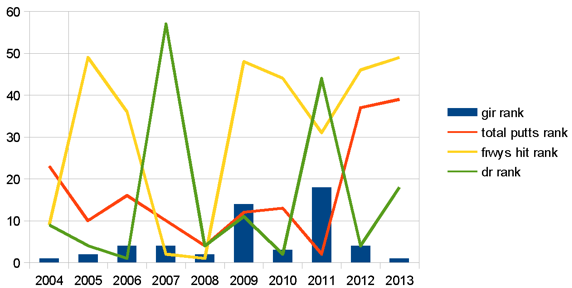 OK, since greens in regulation are so important, who is leading the PGA Tour this year (players in bold in Masters field)?

And there you have it, the simple formula for winning this years Masters. Now who will execute and actually get to those slippery greens in regulation? Isn't that why we watch?