Miguel Angel Jimenez charges at the Masters: Why he's the 'most interesting golfer in the world'

A 50-year-old Spaniard has become the most enjoyable character in golf, and we're happy he's made a run to get in the mix at the Masters with 18 holes left at Augusta.

Share All sharing options for: Miguel Angel Jimenez charges at the Masters: Why he's the 'most interesting golfer in the world'

Miguel Angel Jimenez is well past the age most pros are able to stay competitive at the top tournaments in golf, and yet the Spaniard continues to post numbers against all the young bombers. On Saturday, what's known as "moving day" at the Masters, Jimenez shot the low round of the tournament, a 6-under 66 to fly 34 spots up the leaderboard into third place.

While he's already 50, Jimenez's profile shot up in recent years thanks to his play at the game's biggest events. His first major appearance came all the way back at the 1991 Open Championship, but his work in the Ryder Cup and at some of the majors in the last five years, notably in Scotland last summer, was the first introduction for many to the "most interesting golfer in the world." The Mechanic, as he's known to golf fans, can count 20 European Tour victories to his name, but has flown under the radar in the States until the last few years.

So why's he so popular with the other players, media, and close fans of the game? Well, in short, he's unique in just about every way. His stretching routine is perhaps what's made him most famous, those odd back stretches and knee bends sometimes making the driving range a NSFW area.

There are countless videos of Jimenez out there performing his warm-up routine, and earlier this year, Ping, his equipment sponsor had him out to their headquarters to tutor the staff. He just decided to dance.

Adding to the entertainment value of the stretching routine is the cigar that the Mechanic always, always has fired up while on the range. He never smokes during competitive play, but seems to always be smoking one when he's not in the middle of a tournament round. So there's always smoke billowing around him, and last year when he was over in Asia for a Euro Tour event, he added a local element to his usual routine:

He not only enjoys a fine cigar, however, but is known to usually have a firm grasp on a glass Rioja wine, which he's quick to share. 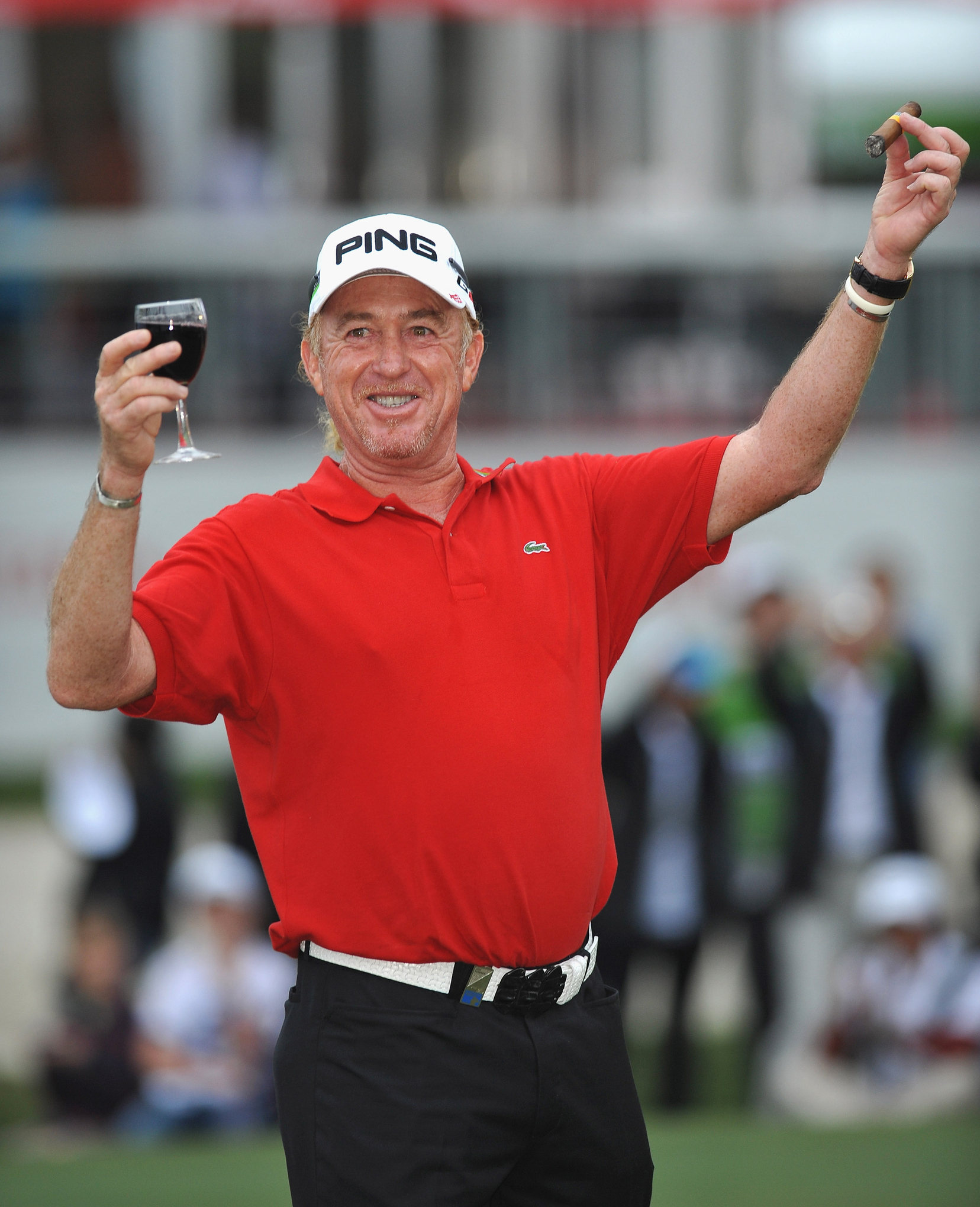 There's way too many great Jimenez photos out there to capture in one place. This recent one from his European captaincy in the inaugural EurAsia Cup, however, was the perfect action shot of one of Spain's great athletes in motion.

"Bounding up the leaderboard I go." Here comes the Miguel Angel Jimenez pic.twitter.com/X0E0Zb6YfX

And just this week, during the par-3 contest, we discovered his method for guiding the ball where he wants, via a whistle as if it were his pup. Talking to the ball doesn't work for just anyone, but it worked on Wednesday for Miguel.

All this is just a snippet of the larger body of work that has landed him the "most interesting golfer in the world" moniker. At last year's British Open, ESPN did a spoof of the Dos Equis ad with Jimenez playing along.

That he was willing to participate is an improvement, because prior to that, Jimenez had absolutely no idea why people were calling him that. Jason Sobel of Golf Channel loves to pass on this transcript of a confused Miguel trying to figure out what it all meant:

I once asked Miguel Angel Jimenez about being The Most Interesting Man in the World. The result was hilarious. pic.twitter.com/W021cRlW4I

And that's why we're happy Miguel is in the mix with 18 holes to play at the biggest event in golf. Aside from the character we've built around him, he's also one of the best players in the world, in form and playing great golf at 50-years old. It looks like that won't stop soon, and in the instant, hopefully he keeps it rolling on Sunday. The more Miguel is in front of the camera, the more he talks to the media, the more he stretches, the more he plays, it's all good for golf.