Even if Tiger Woods was in the field this week at Augusta, Jordan Spieth would still be intent on breaking his mark as the youngest golfer ever to win a green jacket.

Tiger Woods started the week expecting perhaps to lose his No. 1 spot by Sunday night at Augusta. Turns out, with Jordan Spieth sharing the 54-hole lead heading into Sunday’s finale and the three pretenders to the first seed barely holding on, Woods’ record as the youngest winner of the Masters is likely to fall before he topples from atop the world rankings.

With a win on Sunday, the 20-year-old wunderkind and 2013 Rookie of the Year would become the youngest Masters champion ever, breaking the record Woods set in 1997. Spieth, who shot a third-round 2-under 70 to match Bubba Watson at 5-under, became the third Augusta first-timer to score under par in his inaugural three rounds at the Masters.

With Tiger approaching 40, maintaining momentum in the post-Woods era is rapidly becoming the biggest challenge for the PGA Tour.

In addition to taking Woods’ mark, which he would top by five months, Spieth would become the first Masters rookie to earn a green jacket since Fuzzy Zoeller did so in 1979 and the youngest player to win a major in 83 years.

With Woods missing his first Masters since 1994 after undergoing back surgery, one of the intriguing story lines heading into the men’s first major of the season was whether defending champion Adam Scott, FedExCup and Race to Dubai winner Henrik Stenson, or Jason Day would take over the top ranking.

Though Scott struggled to a third-round 4-over 76 (while playing alongside Spieth), the world No. 2 will enter the final round just six shots back of the co-leaders and could knock Woods off with a decent finish.

Adam Scott will need a 2-way T3 in The Masters to pass Tiger Woods in OWGR.

But all eyes will be on Spieth, who, in his first turn around Augusta has captured the attention of the golf world and entered rarified air. He is already among the four youngest 54-hole leaders in the majors since World War II, according to Golf Channel. 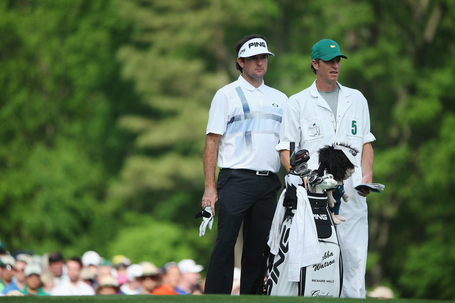 Bubba Watson waits to hit his tee shot off No. 12. (Andrew Redington/Getty Images)

Before any of that happens, the youngster must overcome a leaderboard full of far more experienced players, some with history of their own to make.

Miguel Angel Jimenez (-3) would, at age 50, become the Masters' oldest winner. Jonas Blixt (-4) would win Sweden its first green jacket, while Denmark roots for Thomas Bjorn (-2) to become that country’s first Augusta champion. Matt Kuchar (-4), Rickie Fowler (-3) and Lee Westwood (-2) are also among the 11 golfers within four shots of the lead.

But it’s Spieth, playing in the final group with Watson, who will be in the spotlight Sunday afternoon.

"Tomorrow is about seeing how I can control my game and emotions out on the golf course against guys that have even won here recently," Spieth told reporters about his quest to fulfill "a dream come true" of winning at Augusta.

"So they have been in the position I haven't. Doesn't necessarily mean," the self-assured Texan added, "that they have an advantage in any way. I think that I'm very confident in the way things are going, and really looking forward to tomorrow."

Watson, who scuffled to a 74 on Saturday, believes Spieth will be up to the task.

"He’s young," said Bubba, who bested the kid by two strokes when they played together in the final round of The Barclays last year. "Nerves are no big deal to him."

While Watson may have gotten the better of him in their only PGA Tour tilt, Spieth has outplayed three major champions in head-to-head battles in the past year. In what CBS Sports’ Jim Nantz dubbed the "Spieth Effect," young Jordan bettered Woods by nine shots in the first two rounds at Torrey Pines in January, Rory McIlroy by seven strokes in the first two rounds this week, and Scott by six strokes on Saturday.

In addition to writing Woods out of the history books, Spieth can accomplish several other marks. He will already tee off as the youngest golfer to bring up the rear on a Masters Sunday.

Jordan Spieth would be the youngest player in the final pairing Sunday in Masters history.

And a win would resound throughout the majors as a whole.

Not too shabby for a kid who kicked off the 2013 season without playing privileges on the PGA or any other tour.

When the '13 season started, @JordanSpieth was outside the top-800 in the world & without status on any tour.

In case all that were not weighty enough, we’ll let the voice of the Masters have the final word about the impressive Mr. Spieth.

"Win or lose, you just got a good look at a young man who’s going to be a big part of the future of this sport," intoned Nantz, never one to downplay the drama of a moment when hyperbole will suffice. "And tomorrow could be one historic day here at Augusta."