Bubba Watson is one of golf's most unique talents. He's got tons of game, and has plenty of fun off the course. But he's also got a history of actions and comments that have turned off many would-be fans.

Share All sharing options for: Why some are rooting against the divisive Bubba Watson on Sunday at the Masters

Bubba Watson is on the verge of capturing his second Masters title in three years. It would be an amazing feat for a working-class kid with a hillbilly name and an singularly creative, entertaining golf game. But there are many fans, and media members, who won't be thrilled with a Bubba win on Sunday at Augusta.

Everything you may have missed from Augusta

Watson's life changed overnight when he won at Augusta in 2012, with the boost to his profile also increasing the scrutiny. While he's often pretty gregarious in public-facing interviews and on Twitter, Bubba has a reputation for being prickly and cranky. There have been several instances where Bubba has made headlines for the wrong reasons, and there are many more stories that never make it into the press. Some of the incidents have created a coalition of Bubba enemies.

The most notable blowup over the past year occurred when Bubba lit into his caddie, Ted Scott, at the Travelers Championship last June. The tirade was caught by the broadcast microphones, and it became a much larger story than Ken Duke's tournament victory. In that instance, Bubba made a triple bogey and blamed Scott for the club selection on a couple instances. He capped it with, "There's just no reason to show up."

That's the most memorable instance of Bubba using Scott as a punching bag, and fellow players and commentators reacted strongly the next day by criticizing Bubba for blaming the looper for his poor shots. It should be noted that Scott took the blame, and both joked around about it a couple days later. Also, lots of players get angry with their caddies, but Bubba's frustration is almost always conspicuous.

How can the PGA move on without its biggest star?

Even though Scott says it's part of their working relationship, that hasn't stopped media and fans from jumping on Bubba every time he throws a look at his caddie when a putt breaks unexpectedly. And this happens on many near misses -- there's a classic Bubba move, where he motions his arm out in the direction of the putt and shoots a look at Teddy. 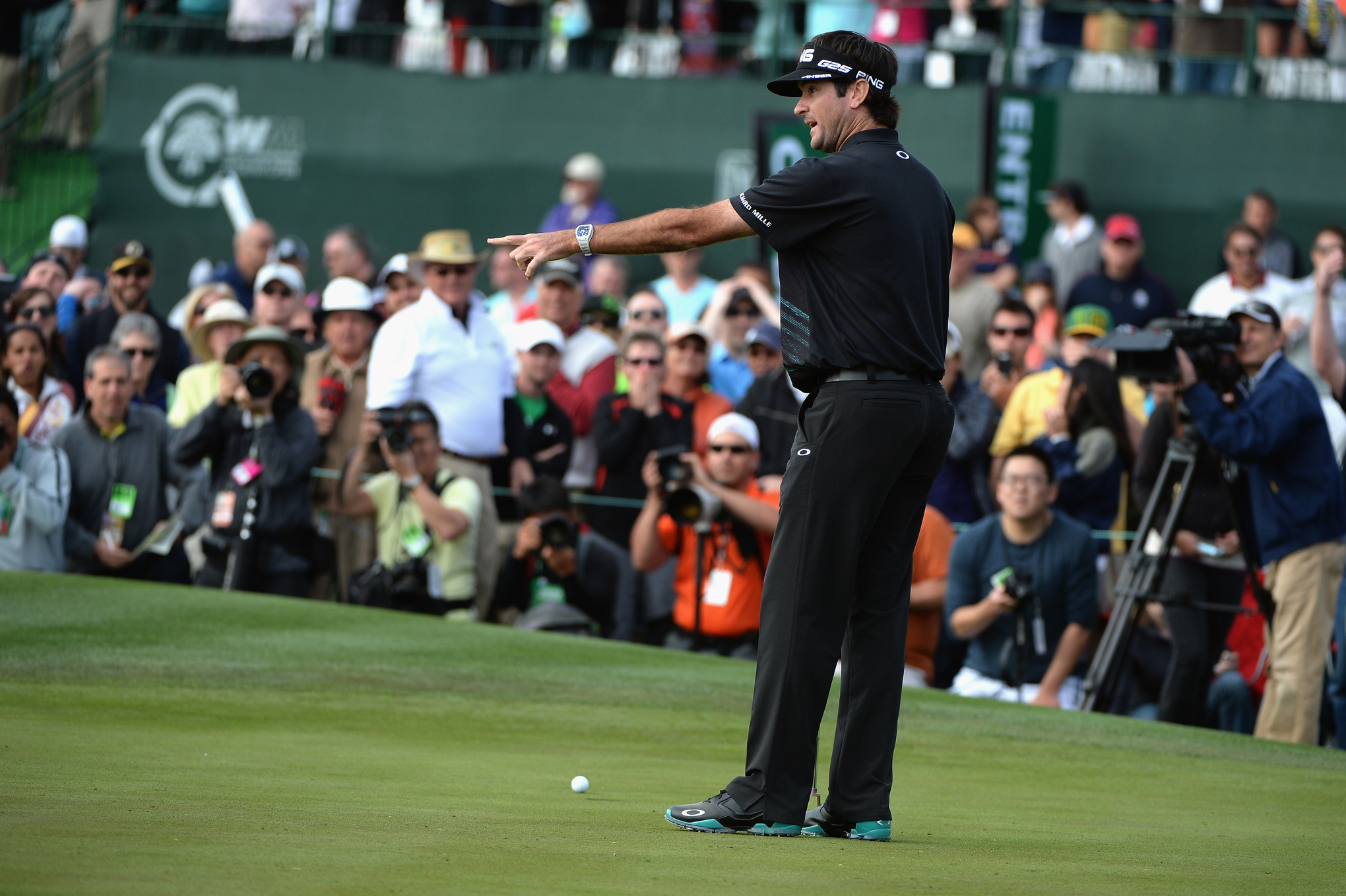 Bubba looks to Ted Scott after missing a putt to lose the Phoenix Open in February.

During Bubba's shaky Saturday round, the looks to his caddie even caused a minor movement on Twitter with #TedsFault and #BlameTed getting some use. After the round, he cited some "club selection" issues as a reason for some slip-ups. But just a few looks at his bagman during his underwhelming day on the greens, and that's all anyone needed to presume he was pissed off at Scott. 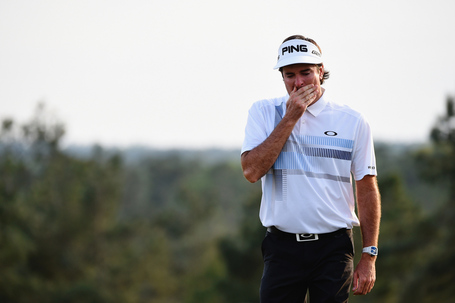 In addition to getting chippy with his caddie, Bubba's not known for always being particularly friendly with the galleries. He's been known to snipe at folks taking pictures during practice rounds, and lashed back (sometimes correctly) at the fans during his win at Riviera in February. I personally chuckled for a moment when he said this year is all about being a "year of rejoicing" after spending a Sunday round on edge and snapping back at the crowds of the Northern Trust Open. Playing golf with hundreds of people crowded around you can be a complicated thing, but Bubba, fair or not, definitely has the reputation for being frosty with the fans.

Another memorable Bubba blow-up occurred overseas, when he played the role of the "ugly American" that Europeans sometimes caricature. Watson was not happy with the way the grounds were patrolled at the tournament, ripping the officials for failing to keep the crowds under control (via Golf.com).

"It's not a normal tournament. There's cameras, there's phones, there's everything. There's no security. I don't know which holes to walk through. There's no ropes … Every tee says 'no phones, no video cameras' and on every tee there's hundreds."

That infuriated the Euro Tour and made Bubba again look whiny and petty. He was the only one to really speak out about the issue. And then he didn't exactly distinguish himself when he said he went over there to experience a new culture, but flippantly struggled to remember the name of "the big tower" and other famous Paris landmarks (via Golf.com).

"I don't know the names of all the things, the big tower, Eiffel Tower, an arch (Arc de Triomphe), whatever I rode around in a circle," he said. "And then what's that - it starts with an 'L' - Louvre, something like that. One of those."

That didn't necessarily make him look like a jerk so much as amusingly foolish. But Bubba continued to just rip the entire way pro golf was set up overseas, and reiterated he'd play the British Open "only" because it was a major and "get home as fast as possible." Again, fair or not, it was blow-up that's stuck to Bubba.

There's also a perception that Bubba doesn't care all that much about golf. Colin Montgomerie criticized him on Saturday night for post-round comments that seemed to imply that it would be OK if he loses Sunday because he already has a green jacket. Montgomerie misquoted him while criticizing him, and Bubba did simply answer a question with, "Yeah, because if I shoot 90 tomorrow I still have a Green Jacket. So it's not as bad. It's one of those things, you're still trying to win, it's still a tournament."

Perhaps the most recent incident of Bubba competitively bailing is his appearance immediately prior to the Masters. At the Arnold Palmer Invitational, Watson put three balls in the water on one hole to make a quintuple-bogey 11. It put him in dead last in the first round, and when he finished, he walked away and withdrew from the tournament, citing allergies. Bubba has a documented allergy problem, which he said has caused issues before on the Florida swing. But this was almost certainly a bogus reason for deciding to bail on the rest of the tournament. Hours after his WD, Rickie Fowler posted videos to Instagram of the two playing around on the dock at Bubba's nearby home. This, of course, irked traditionalists, some suggesting Arnold Palmer not have him back to his Orlando-based tournament.

And finally, there are the statements Bubba made about gay marriage. A large portion of the golf community, whether it's the pros or media covering the sport, is very conservative. It rarely seeps into coverage or becomes a public issue. Bubba is quick to cite his faith in both victory and defeat, and it's obviously a large part of his life. But he stepped in it last year when he tweeted support for Chris Broussard's homophobic remarks on Jason Collins' decision to come out. He didn't exactly backtrack from his stance, when he said he didn't mean any harm to Collins (via the Christian Post):

How the Nets center made history

Even as he made sports history, Jason Collins just did his job.

How the Nets center made history

"The Bible says you're not supposed to be gay, and so I never downed Jason," Watson told Golfweek, referring to his tweet this week, which said "Thanks @Chris_Broussard for sharing your faith & the bible!! #GodIsGood."... Watson commented, "I've met Jason, said, 'Hey,' to him, because he used to play for the Suns when I had the Suns tickets. I respect anybody that's gay."

He would go on to reaffirm his belief that being gay is a sin:

"I'm not saying I'm better than anybody else," he said. "I'm not saying he's wrong, I'm saying I love him. If he called me right now and said, 'Hey,' or any person that was gay called me, I'd go to dinner with them any time. It's just my belief system on the Bible says you can't be gay. That's a sin. So somebody living in sin I believe to be wrong."

The 2012 Masters champ is a unique talent on the course. His first name, the way he bombs it all over the place and the insane shot shapes from the fairway (it's how he pulled off that memorable shot on No. 10 to win it) should make him an overwhelming fan favorite. He also raises plenty of charity dollars, appears to be an awesome dad and engages well with fans on Twitter. But the guy with the folksy first name and entertaining golf game is a polarizing character, and of all the guys at the top of the leaderboard on Sunday, he's probably got the most people rooting against him.