It's been six years since Tiger Woods won the U.S. Open, his last major, and it's a drought that will continue this week when he misses his sixth major in that same span. What has happened to the game's greatest force?

When Tiger Woods finally put away Rocco Mediate at the 2008 U.S. Open, we knew Woods was hurt. He had limped around Torrey Pines for a few days. He often winced and even fell to the ground on occasion. Something was wrong.

And we soon found out it was about as severe a knee injury as you can get in golf. Tiger had damaged his already banged-up knee to the point that he needed more surgery to correct several issues, including a torn ACL and a bone fracture. But I, like most golf fans, couldn't have imagined that the 2008 U.S. Open would have been the last time Tiger would take home a major championship. He's still stuck on 14 and it remains one of the biggest 180s in all of sports.

Back at the event where he last won a major and is now unable to go for the sixth time in a six-year drought prompts a review of those intervening, wild years. He won his first 14 majors in just 12 years through to that one-legged U.S. Open title, and had never missed a major. Six years after he won our national championship on one leg, let's take a look at what has happened since Tiger's last major title.

At times it looked as if Tiger couldn't even stand upright without leaning on a golf club. The fact that he won that U.S. Open is still one of the greatest achievements in the history of golf. But his knee problems obviously needed to be repaired, and while it was his most serious injury, it was just the start of a six-year stretch of trouble.

After the U.S. Open at Torrey, Tiger shut it down for the rest of the year to recover from the ACL surgery, missing the British Open and PGA Championship.

Why we miss Tiger Woods at the U.S. Open

Tiger will miss his second straight major championship as the rest of the best in golf will tee off at Pinehurst without the former world No. 1, so we’ll have to content ourselves with looking back at some of Woods’ most memorable U.S. Open moments.

With Tiger out again, can Phil win his 1st title?

The U.S. Open is a unique test and it returns to a completely overhauled and restored venue. With Tiger Woods once again on the shelf, the SB Nation golf team discusses what to expect this week at Pinehurst.

Why we miss Tiger Woods at the U.S. Open With Tiger out again, can Phil win his 1st title?

Oh man, what a year. Let's start with the golf. Compared to most golfers, Tiger had an amazing season. He won six times. That's a career year for anyone on the PGA Tour.

But as we know, whether fair or not, Tiger is judged on majors. After a pair of T6s at the Masters and the U.S. Open, Tiger missed the cut at the British Open. That missed cut was maybe the first sign that we were seeing a different Tiger Woods. It was the first time he had missed a British Open cut and only the second time he missed a cut in a major. The other time came shortly after his father's death.

Tiger rebounded to win the next two times out, at the Buick Open and the Bridgestone Invitational. Everything seemed to be back on track.

But then something even more bizarre happened at the PGA Championship. The greatest "closer" the game has ever known blew a 54-hole lead. Even more surprising, it was to someone named Y.E. Yang, a relatively unknown and untested played.

As the season came to a close and Tiger was without a major, people were concerned. But I don't think anyone wanted to hit the panic button. None of us could have predicted what happened in November of 2009. You know the story. The wrecked Escalade, the girls, the cheating, the 9 iron-wielding wife (allegedly). In the next few months, Tiger's public image unraveled. It was surreal. Tiger's failure to close at the PGA Championship was concerning, but this was something else. He disappeared for a while to work on his personal life.

When Tiger Woods chose to return to golf, he did so at a place where he will always be welcome, Augusta National.

He showed up at the 2010 Masters sporting dark sunglasses, almost hiding his face from a curious public. And while we weren't sure of his mental state entering that Masters, we were sure that something was wrong with his golf swing. It appeared to be a patchwork mix of the various iterations of his swing over the years.

Somehow, Tiger finished T4. Same at the U.S. Open. But he wasn't really a factor in very many tournaments in 2010. It was another bizarre year. And another major-less one for Tiger.

Tiger spent the winter trying to get his swing right with new instructor Sean Foley. It was definitely a work in progress for most of the spring. After tying for fourth place again at the Masters, Tiger revealed that he was hurt again, aggravating an Achilles strain and MCL strain when he took a full cut from the pine straw under the Eisenhower Tree at Augusta's 17th hole. 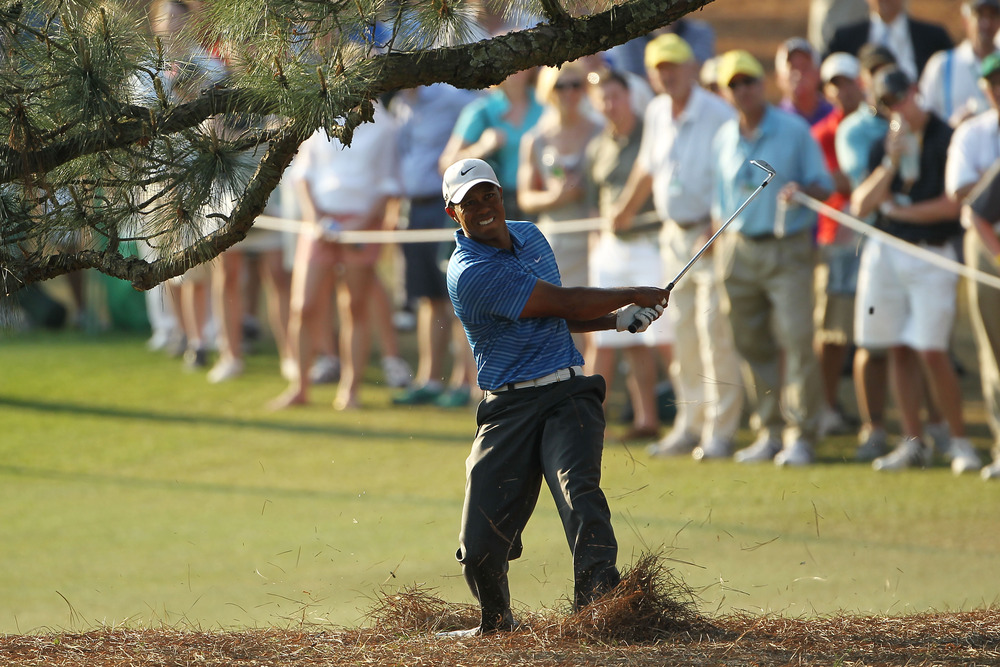 He would miss the U.S. and British Opens, for four total in a three-year span. Then in July, he fired his longtime caddie Steve Williams. To an outsider, it looked as if Tiger was cleaning house and jettisoning anyone that was around during his personal scandal.

After going another year without winning an official event, Tiger was ranked 50th in the world. Pick any word you want to describe Tiger in 2010 and 2011. Bizarre, surreal, shocking. It was all of those things and more.

At the start of 2012, it appeared as if Tiger was getting back on track. He put himself in contention in Abu Dhabi and at the Pebble Beach Pro-Am. But in another unexpected twist to Tiger's career, he struggled on the weekend at both tournaments. His winless streak continued and we were now questioning Tiger's ability to close out tournaments. It became tough to watch.

The roller coaster continued up until the Masters. A final round 62 at the Honda Classic gave Tiger fans some hope. Maybe that was the type of Sunday drama he needed to get his career back on track.

But his leg was banged-up again and Tiger missed a few weeks before playing at the Arnold Palmer Invitational, always a comfortable setting for the now eight-time winner at Bay Hill. He ended up winning that tournament for his first official title in more than two years. Roller coaster, say what?

Tiger added wins at the Memorial and AT&T National, but went 0-4 in the majors again.

In 2013, it looked like he had finally put it all together. His swing and his personal life seemed to be stable for the first time in years. He won three times before the Masters and reascended to the No. 1 ranking in the world by clinching another Arnold Palmer Invitational title. He was the undisputed favorite heading to Augusta.

In the second round, however, the inevitability of a fifth Masters win vanished with another I-can't-believe-that-just-happened moment. We all know what happened ...

Woods took one of the most famous drops in the history of the game, later deemed illegal and for a two-stroke penalty and an arresting debate over whether he should have been disqualified. So if you're keeping score at home, if Tiger didn't hit that flagstick, he would have likely made birdie. Instead, he made an 8 or triple bogey. That's a four shot difference, the same amount of strokes between Tiger and the champion, Adam Scott.

Again, bizarre, surreal, pick an adjective to describe that Masters.

More injuries would appear before the season was over; an elbow issue at the U.S. Open and the first signs of some legitimate back trouble popped up at The Barclays in August and the Presidents Cup in October.

The weekend troubles and disappearance in the final two rounds at major championships defined much of Tiger's year. Sure he won again and earned a ridiculous 11th Player of the Year honor, but it was still startling to see Tiger stumble on the weekend.

This season will be known as the "bad back" portion of Tiger's career. On March 31, he announced that he had surgery to repair a pinched nerve in his aching back that forced him out of the Honda Classic and prevented him, at times, from even bending over to pick up his ball at Doral one week later. We haven't seen him since.

No one knows what the next few months hold for Tiger, let alone the next few years and his chase to catch Jack Nicklaus' record of 18 major championships.

It's possible we could see Tiger at the British Open, but I don't think it would surprise anyone to see him shut it down for the season. In a career that once seemed to be heading in one very defined direction, we now know that the only thing certain about Tiger is that he will be unpredictable.