The biggest star at the U.S. Open is the course, and that's a problem

At one of golf's most important events of the year -- played without its biggest superstar in a sport struggling to attract younger audiences -- "wiregrass" and "native sandy areas" are receiving inordinate coverage and becoming the largest part of the U.S. Open.

Share All sharing options for: The biggest star at the U.S. Open is the course, and that's a problem

The biggest star at the U.S. Open is often the golf course. With Tiger Woods absent and this year's venue an overhauled and restored Pinehurst, it's especially true at the 114th edition of the USGA's most prestigious event. In a sport desperate to attract younger audiences and promote its non-Tiger stars, that doesn't seem like a good thing.

The course, its conditions and its history are often interesting to the small subset of sports fans who are the committed golf audience already tuning in no matter what. But for the larger group of casual fans with an outside curiosity about the national championship or the sport in general, the constant hammering over the head with terms like "native sandy areas" (and attendant rules parsing, delay, and debate) will sound like the stuff of a niche sport, and is a turnoff.

The larger audience does not want to hear reverent discussions about plants and course architecture loaded with terms of art about the layout and conditions. And that's what inevitably sucks up so much of the oxygen at a U.S. Open.

A complete guide of Pinehurst No. 2

The U.S. Open will be held in a familiar place, but the course won't be what we're used to seeing.

A complete guide of Pinehurst No. 2

Approach someone in the audience subset who might tune in just to watch Tiger Woods -- a demographic golf is trying to desperately hold on to -- and tell them the dominant pre-tournament coverage topic centered on these cool new "native sandy reas" and the debate over where they begin and a sand trap ends. You will get a laugh or a blank stare in return. The same goes for "repellant turtleback (or crowned) greens," and few know or are interested in the role Bill Coore and Ben Crenshaw are playing in this year's U.S Open. "We're competing against the World Cup and Finals, so let's talk about dirt and grass" doesn't seem like a good strategy. But those have been and will be the most prevalent discussion topics during the coverage this week in North Carolina.

Much of the venue coverage has focused on just how dissimilar for U.S. Opens past the setup will be, with no thick high rough and these waste areas running around each fairway. It's been said the course looks like Pine Valley or Walton Heath or Royal Melbourne in different spots, but who does that resonate with in the larger viewing audience? The name may be familiar to some, but how many have been inside Pine Valley or have any idea what it looks like? "What would Donald Ross think of the way his original masterpiece looks again?" Who?

And how much of this stuff, which takes up such a significant portion of the coverage before and during the tournament, do we remember after the tournament? What's documented, remembered, and identifiable in the weeks and years after a U.S. Open are the actors and their actions. Last year we heard so much about Cobb's Creek and the setup at Merion, a most-exclusive venue that reportedly landed the U.S. Open largely due to the lobbying of one powerful individual, David Fay, and then never heard, uttered, or thought about that particular body of water again. What can be done to spend more time intelligently informing the audience on (or outright promoting in some cases) the action and the players before and during the tournament, because that's what sticks and attracts audiences at the margins. Not rough height, the stimpmeter reading, fall line, and course architects. 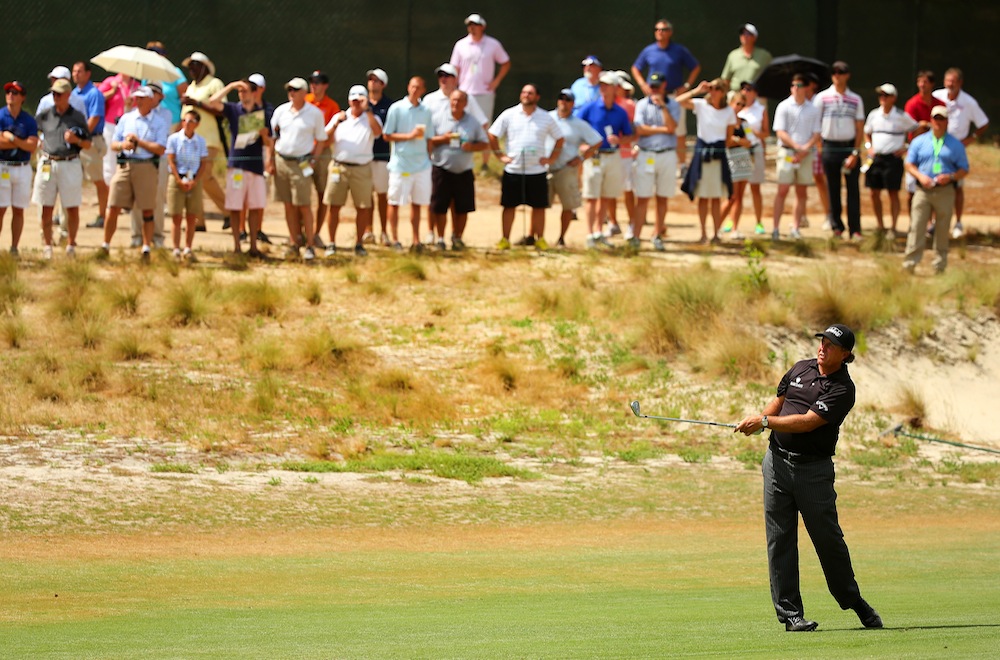 The irony is that this Pinehurst course is the most forward-looking setup at a U.S. Open in years. It's on the leading edge of what needs to change in course architecture, and (hopefully) the future. While the changes took No. 2 back to its original condition, it's now the most high-profile example in the water conservation efforts and maintenance budgeting that need to be implemented in American golf. The gross water-mismanagement and money poured into maintaining these lush green courses in areas not otherwise lush and green was not sustainable. This is not a course meant to be pristine like Augusta, and some 700 sprinkler heads were taken out and reduced water usage from 55 million gallons annually to 15 million. That's crucial to the sport in America and it's where things need to go, and this week's stage is enormously important for helping push that impression on designers, not casual fans, to revolutionize the approach to recreational golf courses in the country. It can improve and sustain the game, but talking about it to the larger younger audience all the time this week isn't going interest them.

I come highlighting what I think is a problem and offering no easy solutions. There are hours and hours of air time to fill and thousands of words to write on what is one of the four most important weekends on the golf calendar. And media teams don't want to be so cynical as to assume their casual audience is unintelligent and not looking to learn or discover more. But there's a balance between dismissing all attempts to inform by pushing carnival-barking punditry, and carrying on with the presumption that your audience is in the same place as you are with the minutiae of the course agronomy and setup. That builds a quick wall for casual fans, who the sport is already losing and who might have their own preconceived views on a game they're convinced is boring, especially when Tiger's not around.

Pinehurst is now the most high-profile example in the water conservation efforts and maintenance budgeting that need to be implemented in American golf.

The USGA does much good for the game. They have made and are making a continued effort to take their most prestigious event to as many public courses as possible, and unlike the other two American majors, this is truly an "Open" where anyone who is good enough can sign up and qualify.

The course conditions and setup are a part of the story at a major and of interest mostly to the already converted. I've personally enjoyed most of the coverage of the new elements at Pinehurst and hearing from Coore/Crenshaw, but I shouldn't be the target during this enormous week for the game.

It's the U.S. Open and we're always going to talk about the course because it does play a significant role each year (we annually hear "the course is winning"). But the reverent tones, the frequency of insider terms, and constant analysis are the stuff of niche and probably not deserving of the inordinate amount of time they will get this week. All the ink and air time using purple prose to eulogize a tree this year at Augusta prompted laughter and derision from people the game needs to appeal to right now. Talking about wiregrass and "native sandy areas", which are going to dominate the coverage over the next four days, will do the same.