The LeBron James NBA Finals Disaster: A Last Word Before We Move On

On the heels of the Miami Heat's demise in the NBA Finals, it's time to close the book on LeBron James in 2011. With that, let's take one, last look at King James before we purge ourselves of this debate over the summer. Talking Points is a daily series that highlights some of the best stories in sports (and elsehwere). Read the archives here.

Share All sharing options for: The LeBron James NBA Finals Disaster: A Last Word Before We Move On

For 48 hours now, LeBron James and the Miami Heat have been at the center of a national conversation that's alternated between the most cheerful funeral ever and some bizarre nationwide roast. Have you heard what happens when you ask LeBron for a dollar?

So, yeah: We're teetering on the brink of a beating a dead horse's ass here. So with that in mind, let me just say one more thing about LeBron and the 2011 NBA Finals that exposed him in the most unequivocal way possible. It starts with the disconnect I saw when I went to Miami back in April.

Back then, I got a front row seat for the LeBron James PR Machine. "There's also this notion of the lion," said his shoe designer in a presentation to a bunch of writers (before we tested his new Nike shoes). "And LeBron is obviously associated with the lion. He's the beast, the King of the Jungle... Something that's been an important part of his storytelling for a while."

But the association's only "obvious" because of Nike's marketing and the way LeBron's carried himself since he set foot in the NBA. That's why LeBron has been so fascinating from the beginning. Never before have we seen an athlete's reign preordained quite like King James. So with LeBron, the story hasn't really been about hype, but whether he could possibly justify it.

This year in Miami was just a caricature of that dynamic. When the hype exceeded itself, and when LeBron James became bigger than a basketball player. The only thing he could possibly do was win, but losing was always going to make for a better story.

If LeBron had won the title this year and dominated Dallas the way he did Chicago and Boston, he would've been seen the way he should've been all along--an insanely talented basketball player, poised to stake his claim to some of the greatest players in history. If he'd won a title, the story would have been, "put aside what he did this summer, and focus on his game." That's a good story, but beyond sports fans, not many people would notice.

Since he lost, he's bigger than basketball. He's an example of "What Not To Do" and why we shouldn't lionize heroes before they do anything heroic. He's a walking, talking punchline. He's a cautionary tale that teachers and coaches can point to before pointing back at Dirk Nowitzki, the loyal hero of the Mavericks that never sought endorsements but won the most priceless prize in the end. So on and so on, etc, ad infinitum.

It all goes back to that disconnect, though. Between the King of the Jungle and the lion that's scared of his own shadow once he feels threatened. That's why this is such a perfect teaching (and laughing) moment for America; because Bron's supposed to this big unstoppable beast.

But he's just not. If this is the last thing I write about LeBron James for the next months (fingers crossed!) let me reiterate: He's just not the player that Nike and Sports Illustrated and everyone else ordained 10 years ago. Being that player is about more than just talent.

People have all these theories about what happened to LeBron in the NBA Finals, but for me, it's pretty simple. The guy's never dealt well with pressure or adversity, and that's part of what it takes to be the greatest, or at least enter the conversation. The fearlessness that allows a superstar to thrive when he's backed onto a ledge and on the verge of falling off a cliff. LeBron hasn't shown us he can pull off that trick, and evidence keeps mounting that he can't.

So now we're left with the world wringing this story for all its worth, and for the first time ever, LeBron James just isn't that interesting. What once made him fascinating--whether he could possibly live up to the hype--now makes him boring. Because he can't.

We have too much evidence to believe otherwise. If anything, the disconnect between the talent and the hype is just annoying at this point. He may win a title, but unless something dramatic happens, he'll never be the type of guy we count on when the outcome's in doubt. Never great.

What's ironic about all this is that when LeBron started out, he said wanted to use basketball to become something more than a basketball player. That ambition was what made him so polarizing, and it set him up for endless zings now that he's failed.

But while the lion's been exposed, LeBron still gets his wish. He may have proven to the world that he's not King of the Jungle, but that's what finally made LeBron James a Global Icon.

Seriously Though. Unless he gets traded and/or assaults Delonte West, this is the last time we're mentioning LeBron for at least a month. So let's get it all out at once. With that, here's a Talking Points roundup of some of the best LeBron takes on the internet from the past 48 hours.

The story is of LeBron James' failure. He was as bad as I could imagine he'd ever be. He was atrocious. Atrocious. ... He was a dog on offense. He was not a dog on defense, except for late in the series when he got tired of chasing Jason Terry.

I have serious concerns. You can't be him, with his abilities, and have one less offensive rebound than J.J. Barea. I'm not one to use stats like that to crush a guy, but I spent this game repeatedly rewinding my DVR and watching in slow motion. I studied him. I mostly saw him standing and watching. I saw balls fall near him as he did nothing.

A Politics Writer Provides Some Perspective. From the Washington Post:

Take a 16-year-old boy with demonstrably exceptional skills and start calling him the Chosen One, and if you’re lucky, you wind up with LeBron James. If you’re unlucky, you get Darth Vader.

This Pretty Much Sums Up Twitter For The Past 48 Hours. 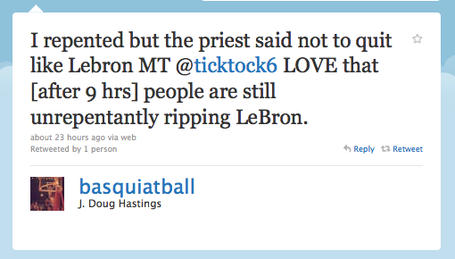 Maybe it's because I know LeBron might be the most talented player I will ever watch, the Wilt of this generation, and I'm going to end up being pissed off that he never reached his potential and took me to a higher place as a sports fan … which is only the entire reason we watch sports in the first place, right? Because we don't know what's going to happen next, and because once in a while, someone shows up who's so good and so talented that he makes us say, "I know what's going to happen next?" Like he's giving us sports fan ESP? The best thing about Jordan's final shot wasn't that he made it, but that we knew he would make it. That's why we revere him all these years later. Usually heroes come through only on command in movies; Jordan did it in real life. We loved him for it.

But just for the record, it's not like the NBA's lacking for talent right now. If LeBron's not the guy that transcends generations and gives us something to tell our grandkids about, there's still plenty of other guys--Kevin Durant, Blake Griffin, Chris Paul, Dwight Howard--that could get there. In the meantime, if the most arrogant, entitled athlete of my generation turns out to be a complete flop as a potential savior of basketball, I think I'm okay with that.

LeBron Wasn't The Only One Who Quit. Check out Bomani Jones' podcast after Game 6.

Proof That LeBron's Boring Now. I don't even have the energy to care about this, but for the record, this is like when someone asks in a job interview about your weaknesses and you say, "Well sometimes I have a tendency to do too much, because I just want to satisfy everyone." 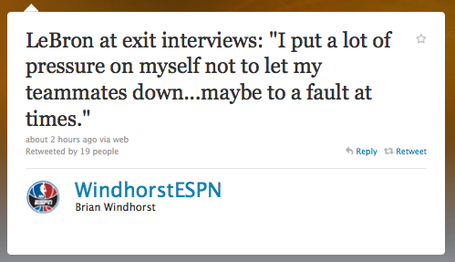 Even if it's true, LeBron still found a way to make himself look like a victim as he (sorta) accepted the blame for his performance. I'm so excited to not talk about this guy for the rest of the summer.

We Can't Hear You, Miami. Dan Le Batard, the Miami Heat's most vocal champion in the media, still hasn't written a column after the Heat's final loss (his most recent work is here), so I guess we'll just have to relive his rant after the Chicago series.

"LeBron James is Keyser Soze! And just like that, POOF, your season is gone!"

A Collection Of Ridiculous Sentences About LeBron James. All from one writer.

This Piece Sums Up My Feelings Pretty Perfectly. From Jay Caspian Kang at Grantland:

It is not hard to be a compelling asshole. Rasheed Wallace's unabashed humanity, Ron Artest's ongoing psychodrama, Jordan's dickishness, and the vacillation of opinion on whether or not Kobe Bryant is a megalomaniac or if Kobe Bryant burns with some ineffable "competitiveness," added a dimension to their legacy as players. We psychoanalyzed them because it was fun, and, sometimes, even instructive to do so. With LeBron, one gets the feeling that even if his story never drags itself out of this chapter, we have already exhausted our desire to figure out why.

Finally, Nine Months Later This Video Still Says It All.