The NFL Lockout Is Almost Over, And Free Agent Chaos Is About To Begin

The NFL Lockout is nearly over, and that just means we're inching closer to the craziest free agent season the NFL's ever seen. You know the offseason that usually lasts all summer? Now it all happens in about ten days. Plus: A classic NBA Lockout story, athletes on Twitter, humblebrags, and The Wire meets the Disney Channel. Talking Points is a series that highlights some of the best stories in sports (and elsewhere). Read the archives here.

Share All sharing options for: The NFL Lockout Is Almost Over, And Free Agent Chaos Is About To Begin

From all indications, the NFL Lockout should end this week. Players will review the final CBA proposal on Wednesday, owners will review it Thursday, and if everything goes according to plan, we should have a deal shortly thereafter. Teams have already begun selling single-game tickets.

And, not to get ahead of ourselves, but all this is setting up for one hell of show when free agency begins on July 25th. There are a lot of reasons to be angry at the NFL for dragging out this lockout for almost the entire spring and summer, but there's at least one silver lining. As Drew Rosenhaus put it, we'll be in for the "most active two-week period in the history of the NFL."

You know that three month period that NFL teams have to fill out their depth charts, sign draft picks, re-sign veterans, and go after big name free agents? Now it all happens in about ten days.

Part of the NFL's current CBA proposal includes these "Transition Rules", per ESPN:

The Transition Rules spell out an actual timeline for roster transactions under the July 21 deal scenario, including the start of the new league year during which free agents would become eligible for the open market on July 28. ... With the tight timeline, teams will be scrambling to fill rosters that must be set at 90 players on roughly Aug. 3 -- but all training camps would be able to open on time.

The Transition Rules also would include a designated period for teams to sign undrafted free agent rookies, a pool that routinely provides productive and even star players.

You can read about the best options on offense and on defense, headlined by names like Nnamdi Asomugha, Reggie Bush, Santonio Holmes, and DeAngelo Williams. But that's just the beginning. There's also guys like Kevin Kolb who will be dangled as trade bait, not to mention the scores of rookies that'll have to be signed before training camp gets started. Picture an ATM exploding with cash free agents, and 30 teams falling all over themselves to get as rich as possible.

The floodgates aren't open quite yet, but when the lockout finally ends, it won't take long for things to get historically chaotic. Can anybody think of a better way to get the entire country fired up for football season? And who else is excited to see how badly the Redskins screw this up?

Redskins jokes? Feels like football season already... With that, another edition of Talking Points.

What's Your Favorite Game On The NBA Schedule? Releasing the 2011-12 NBA schedule at this point--with the lockout as contentious as ever and players openly courting overseas suitors--is like scheduling a vacation with a girlfriend who's currently not speaking to you.

In fact, with the NBA's example, that girlfriend is actively trying to cheat on you with a bunch of European lovers, resigned to irreconcilable differences, and willing to get in bed with shady European businesses to pay the rent. So, "Mavs-Bulls on opening night!", you say?

Let's not get too excited.

On The Other Hand... Lockouts Can Be Fun, Too! Who knows what kind of surprises we're in for in 2011, but the last time the NBA had a lockout, we got to enjoy stories like this:

Boston Celtic Kenny Anderson has found one positive thing about the NBA lockout: It's keeping his estranged wife, Tami Akbar, from getting her hands on more money. ... Tami can't get her check until Kenny gets his.

Sure, you already there's an entire economy connected to the NBA. Stadium vendors, ticket brokers, marketing teams, etc. But let's remember to include divorce lawyers in that category.

"Everything's on hold because of this damn strike," growls Raoul Lionel Felder, who is of counsel to Akbar's L.A. lawyer, Neil Hirsch. "It's costing divorce lawyers a lot of money all over the country."

Really, everything about this article made my day. Kenny Anderson's divorce remains one of the most ridiculous stories in NBA history. You wouldn't think you could get any funnier than divorce lawyers complaining about poverty, but then...

Some of Anderson's friends warned him against marrying her. An aspiring singer, she first gained attention in 1993 as a housemate on MTV's "Real World." On that show, she invited viewers to accompany her to an abortion she had.

[Note to self: never marry a girl who had a televised abortion]

Then again, friends of Akbar say that the generous Anderson (he gave her $3,500 a month for household expenses) does have a temper. He's also been known to scatter his seed: He already pays $7,200 in monthly child support for his daughter Kristinise, 5, whose mother is Salt-N-Pepa rapper Spinderella, and for daughter Danielle, 8, born to another ex-girlfriend.

The outlook for the NBA Lockout may be a whole lot more ominous that its NFL counterpart, but at the very least, we can all look forward to unintentional comedy that'll hold up a decade later.

This Is Why You Should Follow Athletes On Twitter. Most of the tweets are pretty mundane and a little bit annoying, but every now and then, you stumble across an exchange like this.

Another Reason To Follow Athletes On Twitter. Because some guys, like Vikings punter Chris Kluwe, keep it pretty real at all times. Some context: According to reports, Drew Brees and Peyton Manning have created an obstacle amidst the lockout negotiations because they want compensation for their role in the players' lawsuit. Kluwe's response: 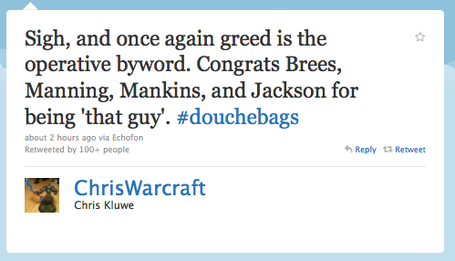 Remember That Time When Disney Channel Spoofed The Wire? Fully support this. The Wire is obviously the greatest, bestest show of all time, ever, but appreciating the show has become so cliched that it's about time people started mocking it. If only to inspire another sanctimonious rant from David Simon, ya know?

The Other Blind Sides. If you're looking for great sportswriting to read at work or at home, the @sportsfeat twitter feed can't be recommended enough. Today, they passed along this piece from Stefan Fatsis at Slate, which looks at the legions of star athletes who moved in with benefactors to help them earn a college scholarship--much like Michael Oher in The Blind Side, but minus the best-selling book and Oscar-winning movie.

It's a great read and a bizarre phenomenon. Check it out.

Finally, One More Note From That Kenny Anderson Story. "The 28-year-old point guard said in October that, although his accountant had built $120,000 into his $3 million annual budget for what Kenny calls 'hanging out money,' the NBA lockout might force him to sell one of his eight luxury cars." That, my friends, is what makes Chibbs a lockout Hall-of-Famer.

This ad seems more appropriate than ever. 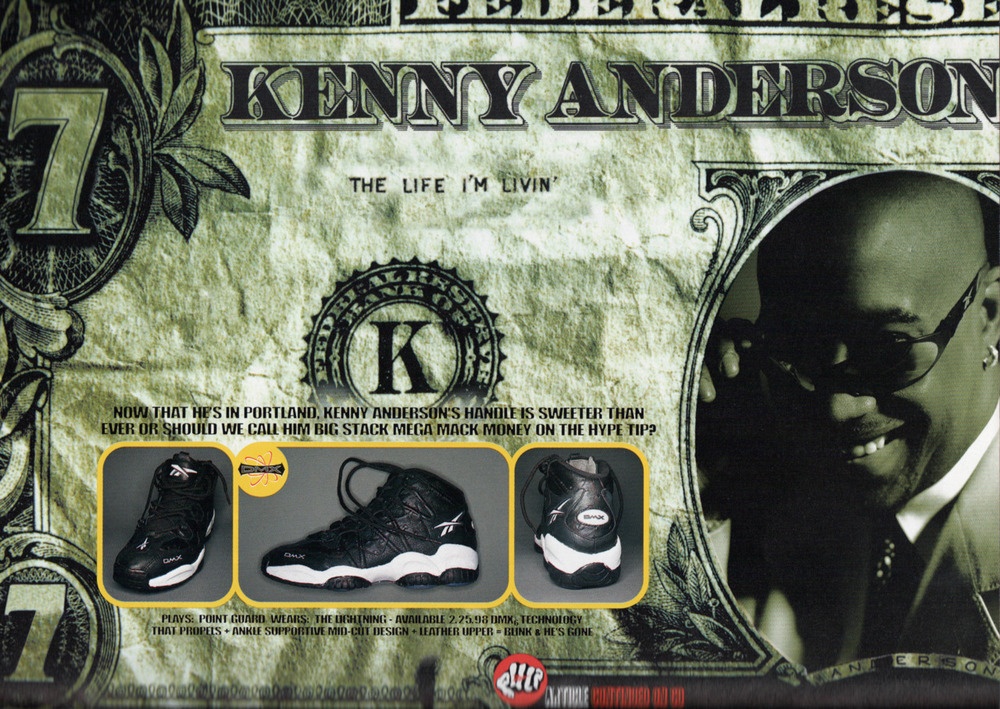