The Nnamdi Asomugha Free Agency Sweepstakes: Why The Losers Could Be Lucky

Nnamdi Asomugha could go to the New York Jets. Or the 49ers. Or maybe the Houston Texans. But wherever he goes, it'll be the teams that don't win the Nnamdi sweepstakes that get luckiest in NFL Free Agency. Plus: The worst free agent contract so far, Donte Stallworth, pool basketball, and the best newspaper lede of the summer. Talking Points is a series that highlights some of the best stories in sports (and elsewhere). Read the archives here.

Share All sharing options for: The Nnamdi Asomugha Free Agency Sweepstakes: Why The Losers Could Be Lucky

48 hours after the lockout resolution, NFL free agency is full swing, and there's no bigger name on the market than Nnamdi Asomugha. The Jets and the 49ers have been rumored as destinations at various points on Wednesday, and teams like the Lions and Eagles could also make a play later in the week.

And aside from his name being really fun to say out loud ("Nahm-dee!"), all the interest is sorta mind-boggling. Nnamdi's been to the Pro Bowl the past four years, he's been an All-Pro four times, and he's probably the best corner in the league. We know this. But the money he's commanding is probably going to be more than Darrelle Revis' contract last year, which was for $46 million, and included $32 million in guarantees.

Paying any NFL Free Agent that much money is usually a bad idea. How often do big name, big money free agents pay off in the NFL? It's 50-50 at best. Sometimes guys get too expensive, and that's when usually smart teams bow out, and someone like Daniel Snyder jumps in.

Just look at Revis. The Jets forced him into a holdout that nearly cost him the entire season, had an up-and-down year after signing that deal, battled injuries through the second half of the season, and was nowhere near the player he'd been the season before. Other than quarterbacks and left tackles, it's usually a risk to go out and give record contracts to someone else's star.

As a general rule, if a guy's that valuable, he wouldn't be available. (Note the Terrell Owens Corollary, however: If a star player alienates his team and forces himself into free agency, this may not apply.)

None of which is to say Asomugha's overrated... It's just that, playing the free agent market comes down to weighing costs, benefits, and risk. And considering he's already 30 years old, and probably due to drop off over the next few years, even Asomugha's benefits come with a risk. It's the paradox with football players.

By the time guys play well enough to earn big money on the free agent market, their best days are usually behind them. Or to put it another way, by the time NFL players are famous enough for the average fan to know their name, chances are, they've already started declining.

So sure, Asomugha may be the biggest name on the market, but for the teams that don't win the sweepstakes--the Lions, Eagles, etc--it could be a blessing in disguise.

Would you rather have an overpaid superstar who's getting worse, or someone like Jonathan Joseph? The latter comes at 70 percent of the price, and should improve over the next three seasons. As for the superstar... Is Nnamdi really the guy who puts the Jets over the top? Is he good enough to keep Matt Stafford healthy in Detroit?

If not, even if he's got the biggest, coolest name... Is he really worth 35 million dollars? 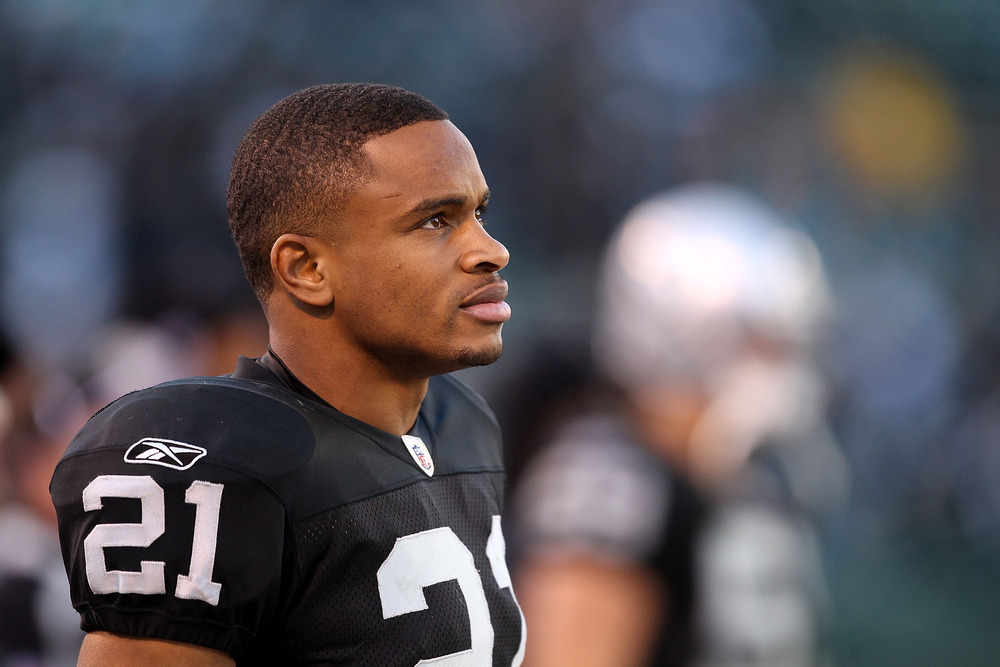 With that, let's get into Talking Points...

And That, My Friends, Is Why They're The Panthers. True, he was a great replacement for Julius Peppers last season, and he's still only 25 years old, but a $30 million signing bonus seems a little extreme. From Bill Barnwell at Grantland:

The biggest surprise was the Brinks truck backed up to Charles Johnson's front door. The Panthers kept their promising young defensive end from hitting free agency by giving him six-year, $72-million deal, including a guaranteed signing bonus of $30 million. Essentially, he got the same deal Aaron Rodgers picked up from the Packers in 2008, but Johnson received $12 million more in guaranteed money. Yowzers. As the AP story put it:

"'Could you have turned that down?' Johnson said of the contract with a laugh."

As a general rule, it's bad when a player says he couldn't turn down the money. And then laughs.

Santonio Holmes Already Has The Best Celebration Of The Year. Hood rich!

Getting To Know The Real Donte Stallworth. The Redskins signed Donte Stallworth on Wednesday, setting off a predictable string of jokes around the web. And while I'm all for making fun of the Redskins, the story behind Stallworth is more complicated than you might remember. Here's a piece from Les Carpenter at Yahoo! Sports last year that does a nice job telling the full story of a guy who seems like one of the more thoughtful men the NFL has to offer, caught up in the midst of tragedy, who chose to take full responsibility for everything that happened. It's worth a read, if only to understand why Stallworth jokes aren't really that funny.

But Redskins Jokes Are Definitely Still Funny. Gonna be a lotta fun headlines this year! 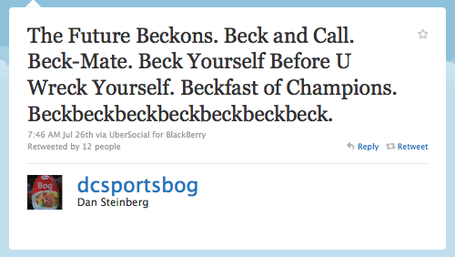 More On The Hoops Scandal The NCAA's Pretty Much Ignored. I wrote about the David Salinas suicide early last week, and ultimately decided that the NCAA will probably ignore the case. First, because it's difficult to prove. Second, because it implicates way too many prominent coaches. And finally--most importantly--because looking closer at Salinas means looking closer at the nature of AAU relationships, in general, and it would probably require a lot more soul searching than the NCAA is willing to do.

"Soul searching" is asking a lot of an organization best known for soulless hypocrisy.

In any case, Sports Illustrated's Pablo Torre goes further in depth on the Salinas case, and it's a great window into the web of deceit and exploitation that ultimately spun out of control for Salinas, but not before he'd defrauded college basketball coaches and players, scores of friends, and even a few NBA players.

Speaking Of Hypocrisy. A new study shows that Butler's basketball team gave the school almost $1 billion in free publicity. But no, college athletes definitely don't deserve to get paid.

Let's all go re-watch The Mad Real World to make us feel better.

From the Phoenix New Times:

For fictional sports agent Jerry Maguire, it was "show me the money!" For non-fictional Valley sports agent Jason Dubin, it's apparently more like show me the two underage girls willing to double-up on me for some oral sex.

It's really too bad Cameron Crowe didn't have the guts to go with the second tagline up there. Could've turned Jerry Maguire into a whole different movie!

Finally, The Best Of Pool Basketball. This is a cool video, there's a lot of incredible shots made, it's perfect for the summer... But I can't shake the feeling that all of these guys are gigantic douchebags.