Oregon Football And Willie Lyles, The Most Dangerous Man In College Sports

Oregon football is at the center of the NCAA's latest college football scandal, and it all comes back to a scout named Willie Lyles. So what does Willie Lyles have to say about that? Plus: Roger Clemens and Casey Anthony, Roy Williams, Mike Tyson, and Rory McIlroy, living the dream. Talking Points is a daily series that runs down some of the best stories in sports (and elsewhere). Read the archives here.

Share All sharing options for: Oregon Football And Willie Lyles, The Most Dangerous Man In College Sports

Lyles never did anything illegal, and neither did the schools that paid him. Of course, things get complicated once you start looking through the NCAA's kaleidoscope of "right" and "wrong." That's how a guy whose never done anything illegal can become college football's biggest danger.

He makes a convenient scapegoat. For anyone who missed the Yahoo! Sports investigation that transformed him from an anonymous scout to a dangerous professional, here's the meat of it:

In a wide-ranging, multi-day interview, Lyles said Kelly "scrambled" in late February and asked Lyles to submit retroactive player profiles to justify the $25,000 payment to his company, just days before the transaction was revealed in a March 3 Yahoo! Sports report. Lyles also provided details of his fledgling company – Complete Scouting Services (CSS) – as well as the extent of his relationship with numerous Texas high school stars and his role in Ducks’ recruitment of certain prospects.

Lyles insists Oregon did not make a direct request or payment to steer recruits to Eugene. However, he now says Oregon did not pay him for his work as a traditional scout, but for his influence with top recruits and their families and his ability to usher prospects through the signing and eligibility process. That dual role as mentor to prospects and paid contractor to Oregon is believed to be a focus of the NCAA probe.

Basically, the University of Oregon admitted to paying Lyles, and Lyles admitted that they paid him because of his proximity to big time recruits, with the expectation that his influence could help sway those recruits. Lyles never promised anything, and Oregon never demanded anything.

But Lyles definitely got paid, and Oregon paid him, and coincidence or not, Lache Seastrunk, a five-star recruit close to Lyles, eventually chose Oregon. For anyone that's followed college sports for more than a month, none of that should be surprising. Where it gets interesting is Lyles, himself.

Namely, he's talking now. He spoke to Bomani Jones this morning in a wide-ranging interview that's well worth your time, if only to humanize the "biggest danger to college football."

The conversation strikes at the crossroads of the NCAA's rules, their implications, morality, and basic logic. "I understand that some of the things I did were wrong by the NCAA’s standards," he said this morning. "But is what I did morally wrong? What’s the difference between what I do, or a [high school] coach going to speak at a clinic and getting paid exorbitant amounts of money?" He's throwing stones from a glass house, but he makes some good points.

The key takeaway, though: When the guy at the center of a college sports scandal starts talking, it raises more questions about college sports than the scandal itself. Dangerous, indeed.

Also, "Teach Me How To Ducky" is still pretty much the greatest. With that, Talking Points...

Roger Clemens, A Colossal Waste Of Time, And True Crime. Because the only appropriate way to follow the absurd Casey Anthony spectacle--where everyone cared a little too much--would be a million-dollar federal prosecution case that nobody cares about.

You can read details of the first day's news here, but if you're going to get caught up reading about the justice system, you're not going to do better than Grantland's interview with Bill James today.

The stats-revolutionary-turned-Red Sox-exec recently wrote a book on America's fascination with crime, and Chuck Klosterman sat down with him to discuss the topic. It helps explain the fascination over someone like Casey Anthony, at least. An excerpt:

Early in the book, you write about the perceived "shame" that comes from being obsessed with crime, and that this has made the genre of crime writing ghettoized within literary circles. What do you think is the public perception of people who are obsessed with crime?

I think among the population at large, people are openly fascinated with crime and don't feel any shame over it. It's only the opinion-makers and the "opinion elites" who turn up their noses. They're the ones who don't think crime should be discussed.

So what do you think it means to be obsessed with crime?

Crimes stories are universally interesting. They reveal a side of people that we'd not otherwise talk about. Crime stories show us the part of people's lives they try to keep hidden.

Do you believe in the concept of "evil"? Does evil exist?

Well … sure. Very evil things happens. I don't have any problem saying that a certain act was evil or that someone acted evil in a given situation. Some people give themselves over to their most evil desires, and those people becomes evil. But in general, it's reductive to think of evil as something foreign and separate from the rest of us. Evil is part of everyone. We all have the capacity to commit evil acts. Popular crime stories are mostly about apparently good people who commit heinous acts. Most of crime is committed by people who are living a criminal life and not making much effort to live good lives. But crime stories are more like O.J. Simpson: People who seem to be doing OK but then give in to evil urges.

And you might want to go buy that book.

Speaking Of The Casey Anthony Trial... Darnell Dockett offered up some of the finest commentary on the internet Tuesday night, and there was also this: 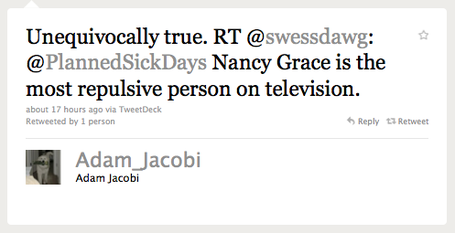 Given all the criticism she's taken over the past week or so...  Seems like a slam dunk, right? But when you think about it, is Nancy Grace that much worse than people like Bill O'Reilly, Keith Olbermann, Skip Bayless, Snooki, or Jay Leno? Granted, she's pretty awful, but I'm still not sure she makes the top five. And yeah, the details from Bill O'Reilly's sexual harassment suit are still completely hilarious.

Roy Williams Faces Rejection. Cowboys wide receiver Roy Williams, last seen dropping one out of every three passes thrown his way, is suing his ex-girlfriend to retrieve an engagement ring. Sometimes, offseason news can be depressing. Sometimes it's just the greatest:

In Williams' case, the details are interesting, to say the least. Williams was dating a girl and mailed her a ring along with a surprise marriage proposal. She rejected his proposal but kept the $76,000 ring.

As a Cowboys fan that's been baffled by Roy Williams' creative means of failure for a solid two years now, it doesn't surprise me in the slightest that he'd purchase an $80,000 engagement ring and still find a way to screw up the proposal. Who mails an engagement ring, you ask?

A guy who deserves to get his ring taken, that's who.

An Awesome Photo Of Michael Jordan. Just because. (via @gotem_coach)

A Long Read About The Death Of Movie Stars. Because it's great.

Reliving The Mike Tyson Experience. There's never a bad day to read about Mike Tyson, so here's a piece from N+1 examining Tyson today. It's a good read, but more than anything else, reliving Tyson's journey from the bottom to the top is still incredible. He went from this...

An asthmatic, overweight, bespectacled child with a funny way of talking, Tyson was teased as a “fairy boy” and occasionally brutally beaten by other boys in Brownsville, Brooklyn. He lived in fear. He was knocked unconscious a few times as child–but not once in the boxing ring as an adult. When Tyson’s mother became an addict, the family fell into deep poverty.

He was occasionally homeless and learned to defend himself with his fists. (So goes his origin myth as a fighter: he first fought back when a bully killed his beloved pet pigeon.) By 12, he’d been arrested for assaults and armed robberies and landed at the Tryon Center for Boys, a juvenile detention center in the Bronx.

Tyson became the highest paid and most popular athlete in the world. Not since Ali had a heavyweight champion achieved the status of a cult figure whose fame extended internationally, far beyond the boxing world. ... A 1990 article in Sports Illustrated recalled that Tyson’s appeal was “no longer as a fighter, since it had become clear that nobody in this world was capable of defeating him, but as an expensive novelty act.” Tyson’s “aura of invincibility far transcended even his considerable boxing skills.” He was a 1980s bull market embodied in a single man.

And then to this.

Finally, Rory McIlroy Is Living The Dream. The dude built a links course in his backyard, which seems unfairly awesome. A long way from chipping into a washing machine...