The NBA Lockout Just Got Real

On Tuesday the NBA announced that they will file two lawsuits to prevent the players' association from decertifying, and after a quiet month of July, the NBA Lockout has already gotten considerably more heated in August. Plus: David Stern's salary, insane tales from the SEC, remembering Randy Moss, and Vince Carter. Talking Points is a series that highlights some of the best stories in sports (and elsewhere). Read the archives here.

Share All sharing options for: The NBA Lockout Just Got Real

The NBA's been in the midst of a lockout for more than a month now, which is to say we've been floating along, enjoying the calm before the storm. Players joking explaining the lockout on Twitter (in between planking), fans throwing around crazy ideas, All-Star games around the world, Carmelo Anthony posing with Pandas, and so on. In a strange way, lockout life has been sort of fun.

On Tuesday, though, David Stern reminded everyone what a lockout really entails. A day after an unproductive meeting with the Players' Association, Stern and the league office blindsided players and media by filing an aggressive lawsuit to fight the union's decertification efforts.

As the league's statement reads, "the NBA filed two claims today against the National Basketball Players Association: an unfair labor practice chargebefore the National Labor Relations Board, and a lawsuit in federal district court in New York. The unfair labor practice charge asserts that the Players Association has failed to bargain in good faith by virtue of its unlawful threats to commence a sham "decertification" and an antitrust lawsuit challenging the NBA’s lockout."

We've been through this posturing with the NFL.

The difference now, though, is how the fight's being fought. With the NFL, it was the players who caught the owners off-guard over and over again. They zigged when the owners zagged, and throughout the lockout process, the players were a much stiffer opponent than they owners ever expected. As fans, it's impossible to see what's happening in the NBA without comparing it to the NFL. And if you're looking to make that comparison... The NBA's pretty much the complete opposite.

Compounding matters, NBA players don't have the same leverage NFL players had--a number of NBA teams are losing money every year, and calling the owners' bluff may not turn out as well. Which isn't to say that Tuesday's news changes anything, really. Decertification didn't save the NFL players, and it probably wouldn't be a miracle for basketball, either.

Instead, Tuesday's lawsuits just add a jolt of adrenalin to the proceedings from here on out. Clearly, David Stern is prepared to play for keeps in all this, and while the first month may have been quiet, Tuesday's lawsuit hints at what's to come. An all-out war, basically.

After an afternoon of unremarkable meetings on Monday, the players were caught completely off guard on Tuesday, but it sets a clear tone for the future. It's sort of perfect that it comes a day after Stern lamented the lack of good faith, because there's nothing less cooperative than blindsiding your negotiating partners with a lawsuit.

There's no "good faith" in war, and if you're looking to understand what the lawsuit could mean for the rest of the lockout, think of it as a warning shot. And the warning was simple: "If we're headed for war, the NBA's going to use every weapon at its disposal."

Indeed, the honeymoon in July was fun, but in August it's clear: The NBA will do everything in its power to crush the players association, and now it's up to the players to strike back.

With that, let's get into another edition Talking Points...

One Weapon For NBA Players? Adrian Wojnarowski. Woj has been on the David Stern warpath for more than a year, but the lockout's infused his writing with more bile than ever. To wit:

When the NBA goes silent for a full year following a most wildly successful season, Stern will deserve full blame for the sport’s shutdown. ... He has the greatest job in sports, and someday soon he’ll be the highest-paid player in the NBA. Stern doesn’t need to push his owners on revenue sharing – the most viable solution for long-term league solvency – when it’s so much easier to go after the players and shut the sport down. He’s taking the easy way out, but it’s understandable considering the staggering salary these owners pay him.

Strange, but the union never has the courage to bring up the mystery surrounding Stern’s salary. Many owners don’t even know what Stern makes. "I’d say three or less know," one NBA owner told Yahoo! Sports. Several believe it’s somewhere in the range of $20 million to $23 million a year, but no one knows for sure.

Maybe I'm being naive, but outside of a litigation miracle, the players' greatest asset in all this will be articles just like that one, exposing the NBA's hypocrisy, and forcing someone like David Stern to answer some tough questions. Even the owners, themselves, have some explaining to do.

It's one thing to claim poverty, but if those claims deliberately mislead people? At some point, if the lockout starts costing fans actual basketball games, notes like this will begin to matter: 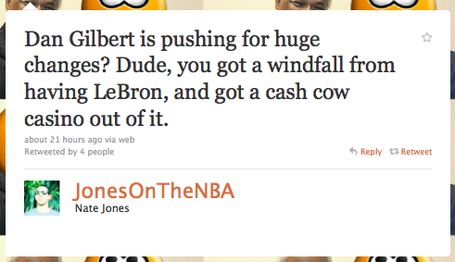 More than anything else, it's up to the players to communicate this stuff to fans. Yes, owning an NBA team isn't guaranteed to be profitable, and players make a lot of money regardless. But when a businessman leverages his good will as an NBA owner into a casino that creates afar more lucrative revenue stream for the next 50 years, doesn't it all sorta even out?

"For God and Country. Geronimo." If by chance you missed this New Yorker piece when it hit the web yesterday, read it now. An in-depth narrative of the Navy SEALs' attack on Bin Laden.

Jason Garrett: Just As Obnoxious As You Remember. The Dallas Football Cowboys!

The SEC Is A World Of Its Own, Example #5,698. How do you catch a bunch of deadbeat parents in the Deep South? With an Iron Bowl sting operation, of course!

What were supposed to be coveted tickets to the 2011 Alabama-Auburn football matchup turned out to be a trip to jail for at least a dozen deadbeat parents arrested Friday by the Lee County Sheriff’s Office as part of operation Iron Snare.

One by one, suspects who were wanted by authorities for a total of more than $270,000 worth of unpaid child support were arrested after arriving at a festive, football-themed location on Second Avenue in Opelika, complete with balloons, streamers and highlights of the 2010 Iron Bowl being shown.

Like that Big 12 knife fight at Applebee's, but even better.

Iron Snare was the first of its kind conducted by the LCSO, but may not be the last time such a method is used to serve warrants for unpaid child support, Jones said. ... Suspects were told they had won tickets to the 2011 Iron Bowl and that the tickets could be claimed in Opelika, but that winners must bring the letter they were mailed and a photo ID of themselves to pick them up, said LCSO Maj. Tommy Carter.

“Do I still get my tickets?” asked one suspect as he was handcuffed.

Sure, that looks like the runaway winner of the "most disturbing SEC story of the year" award, but there's still six months of football season to go, and frankly, this story may not even crack the top five.

Another Reason To Love The South. Courtesy of SB Nation's Jeff Gluck:

From the Department of Wild Ideas, we bring you Tits In The Pits – a NASCAR-themed drama reportedly being considered by the Starz network. ... the screenwriters behind the newly-released Friends With Benefits have pitched a pilot for a TV series about a female NASCAR owner "and her uphill race to secure corporate sponsors that insiders are describing it as a 'red state Mad Men.'"

Let's Not Forget How Weird Randy Moss Was. We touched on Randy Moss' legacy on Monday afternoon, but Drew Magary makes another important point at Deadspin on Tuesday. Namely, Randy Moss may have been the weirdest player to ever set foot on an NFL field.

There are plenty of people who don't think Moss will actually retire, but that's because they're so used to the likes of Favre retiring and unretiring five hundred times. Moss, on the other hand, is a completely different kind of person. He doesn't really have any friends. He's never, to my knowledge, made any public appearances outside of football games. He doesn't go to clubs. He doesn't produce records. He isn't on Twitter. He's a hermit who doesn't much care for other people. You know how when Brett Favre retires every summer and suckers like Peter King are like, "HE'LL DISAPPEAR INTO THE WOODS AND YOU'LL NEVER HEAR FROM HIM AGAIN!" Yeah well, that's not true of Favre, but it is true of Moss.

Finally, We End With The Best Highlight Video Of All Time. Sure, you could spend ten minutes watching highlights of Kevin Durant at Rucker Park, but nothing that NBA players do against scrubs in a streetball game could ever be half as incredible as what Vince Carter did during his first few seasons in the NBA.

The only thing that could make it better? Copious amounts of Mike Tyson.