Though it won't be live on television, the matchup between the nation's top-ranked high school teams will streamed on the Internet.

Share All sharing options for: St. Patrick Vs. St. Anthony Showdown In New Jersey Will Be Shown Live Online

If you want to see St. Patrick play St. Anthony in the unofficial high school national championship game on Wednesday night, you won't have to make the trip to the Rutgers Athletic Center yourself. The Star-Ledger will run a live stream of the epic game between the unbeaten rivals on NJ.com.

"We're going to go live on Wednesday at 8 p.m.," Doug Hutton, sports and marketing manager at the Ledger, said Tuesday morning by phone. As he spoke with a reporter, Hutton was standing in the RAC working on getting the IP address straightened out to make the live stream work.

The matchup between the No. 1 and 2 high school teams in the nation will not be shown live on television, only on delay on Verizon FIOS systems in New Jersey. The ESPN family of networks showed 14 high school basketball games this season, but the network doesn't show city, county or state title games.

"What they're doing is televising stars," said New York recruiting expert Tom Konchalski. "They want matchups with stars, not matchups with teams. They want Austin Rivers vs. Michael Gilchrist. 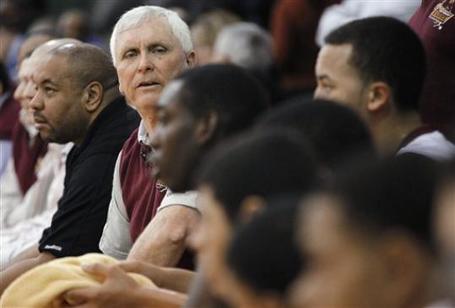 St. Anthony is coached by Naismith Hall of Famer Bob Hurley (shown above in an AP file photo) and features Rutgers-bound point guard Myles Mack and 6-8 junior Kyle Anderson, the No. 1 point guard in the Class of 2012.

"I don't know their games but I'm ready for anything that comes our way," Gilchrist said.

As of Tuesday morning, some 2,500 tickets had been sold for the matchup. A crew from "60 Minutes" requested a credential because it's doing a piece on the Hurley family. Another film crew is making a documentary on St. Patrick.

Hurley and Boyle have a long and well-documented rivalry that stems from disputes over whether certain players were recruited to the respective schools from far away places -- like Connecticut and Africa.

"This is the best coaching job he's done," Hurley told The Star-Ledger's Steve Politi of Boyle after his team drilled Oratory Prep, 92-32, Monday night. "We might not always get along, but this guy can coach. That being said, we're going to take their heads off."

Between them, Hurley (10) and Boyle (5) have won 15 New Jersey Tournament of Champions titles.

St. Patrick will enter this game as the favorite because it has a deeper, more talented roster and has played a tougher schedule.

Mergin Sina, the coach of Gill St. Bernard's, has faced both teams and said he was especially impressed with St. Pat's defense.

Yet, as Konchalski points out, "Anytime Bob Hurley is on the sideline they have a chance to win."

"They have enough weapons to win," he added of the Friars. "It's not as if they're playing a best-of-seven series where talent's going to necessarily prevail. It should be a great game."

Shawnee beat Pleasantville in one game, and St. Anthony downed Christian Brothers Academy in the second.

Among the stars in that doubleheader were Malik Allen of Shawnee, who went on to a career at Villanova and now plays for the Orlando Magic; current CBA coach Geoff Billet; and Brian Lynch, who played at CBA and then Villanova and is now married to tennis star Kim Clijsters.

"That was the closest I've ever seen the RAC for a high school game," Konchalski said. "And it might be [Wednesday] night. You never know."