The rule might be ambiguous in a different situation. It was unambiguous in Game 3 of the 2013 World Series.

I'll listen to your counterarguments now.

/looks up Tom Waits videos on YouTube while you ramble

Yeah, I didn't hear your point, but I'm sure it was an interesting point. Also, an irrelevant point. The rule even has a part reading "For example:" that pretty much describes the situation. Do you think there are Dead Sea Scroll versions of this rule that include something like, "… unless the runner tries to get up, in which case EVERYTHING CHANGES so buckle up, sucker!"?

If you can't interpret that rule and apply it to this scenario, well, I'm not sure what to say.

There's no way Craig was looking for contact. The ball was down the left-field line. He wanted to get home. I've seen suggestions that Craig was out of the baseline, but those suggestions are absurd. His left foot lands in the grass twice as he desperately scrambles home. The actual text of the rule that details what it means to be out of the baseline uses this exact phrase:

... three feet away from his base path to avoid being tagged

At no point was Craig three feet away from the baseline. And he wasn't even avoiding a tag, he was running for his life. This is the lamest controversy of the postseason.

And here's the part that makes me feel completely comfortable with how that game ended: Turns out the catcher winged the ball down the left-field line. Winged? Wung. Wanged. Whatever, it was a dreadful idea to throw in a completely low-reward situation. Here's where the runner was before the tag at home was even made: 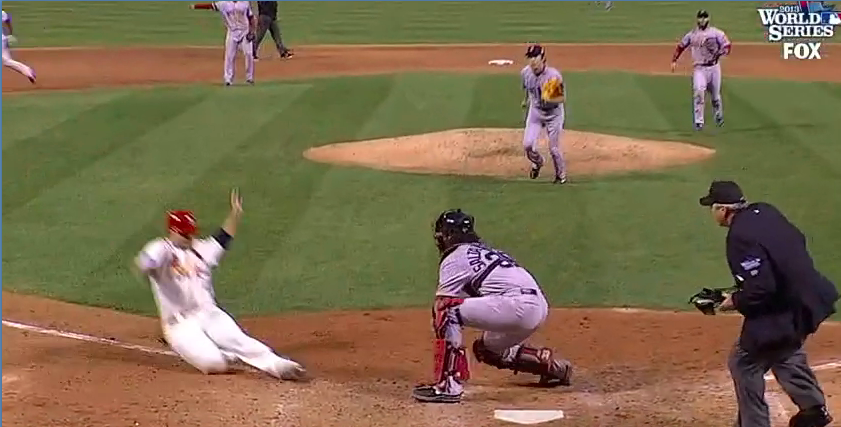 To be fair to Saltalamacchia, the throw arrived at third just after Craig, whose injury is making him run like he's carrying the entire Molina family in a bandolier across his chest. But when that runner is the winning runner in a World Series game, holding on to that ball will never be a questionable decision. Throwing it will be.

Still, apart from the clear, obvious rules of the sport, the Red Sox didn't deserve to win. Not only did they send a reliever to hit in the ninth inning of a tie game in the World Series, but the catcher winged a ball into left field as the winning run slid into third.

So it doesn't even pass the sympathy test. As in, picture a scenario where Middlebrooks juggled the ball as he attempted a tag on Craig down the line, and then imagine what would have happened if he bumped Craig before firing home to beat the runner by six feet. That's pandemonium. That's chaos. Now you're parsing where Middlebrooks did and didn't have the ball and what constitutes the rulebook definition of "passes him."

This is not one of those scenarios. While we're at it, you know what's worse than Saltalamacchia's decision? Middlebrooks's failed catch. 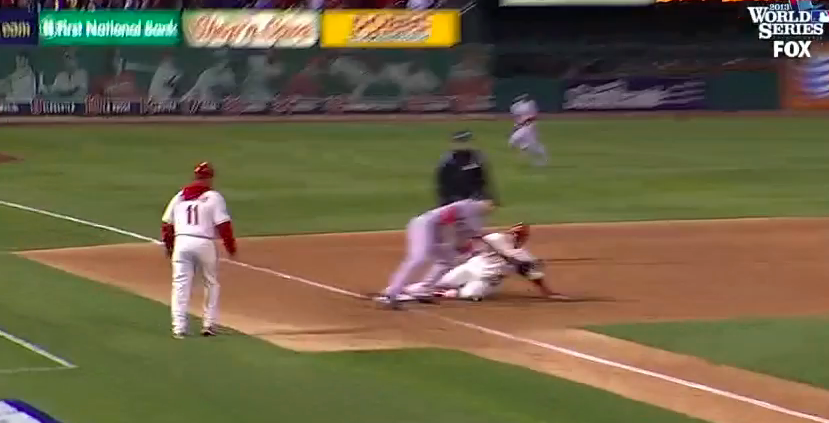 It's almost like he thought it was a force play. He didn't come off the bag at all. More likely, he was more concerned with the tag than with AHHH STOP THAT BASEBALL, when the latter instinct was far, far more important.

Add it all up. The completely unambiguous rule. The catcher making a bad decision. The third baseman missing a catch he should have made. The sight of a ball dribbling down the left-field line as a runner scrambles to get up at third base. Every time that happens, the run scores, right? You've seen the play enough. When there's a runner at third, and the ball sails by third, that runner scores.

Concocting a reason why this runner shouldn't have scored takes a moon-landing-was-faked disregard of evidence. And if you're on the fence for some weird reason, note that the runner deserved to score. When catchers wing the ball down the line and third basemen whiff on them, runners score. That's the point of the game. So even if the rules were vague and mysterious, you could take solace in the fact that the outcome was completely in line with what you'd expect from a play like that.

The rules are not vague and mysterious. The Cardinals won because of a bad defensive play, not because of a rogue umpire.

For more on the Red Sox, please visit Over The Monster.

• So when are the Cardinals going to develop a shortstop?

• The evolving definition of "The Cardinal Way"