Bryce Harper annoyed at loss of his Opening Day jersey, clowns are horrible

Share All sharing options for: Bryce Harper annoyed at loss of his Opening Day jersey, clowns are horrible

The story in brief: The Nationals took Bryce Harper's Opening Day jersey and auctioned it. Harper wasn't exactly thrilled about this. Apparently Harper wanted a keepsake from his first Opening Day. You can't blame him for being a little ticked, and passive-aggressively tweeting out his displeasure.

My idea was to put together a selection of all the tweets of people saying "Clown auction, bro." Except: 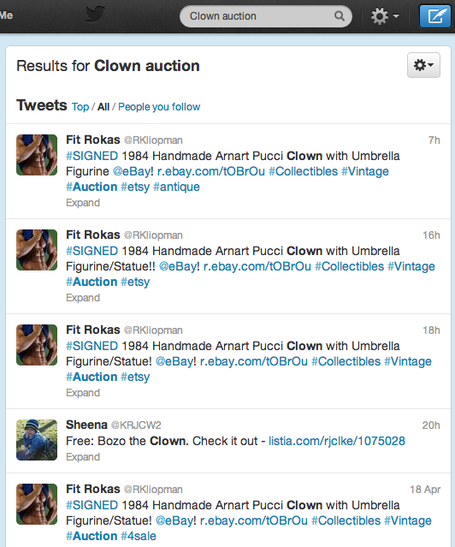 Whoa. Come on, Internet. I needed you just then.

But worse than the dearth of irresistible, obvious jokes is what the absence led me to: A Google search for "clown auction."

How is this possible? The news broke an hour ago, at least. Not one person? Maybe the syntax was wrong, and I just needed to search for "clown auction."

Do not do this.