You know what really bothers me? When baseball teams won't commit to a good idea. My favorite example is the Royals' power-blue throwback uniforms. Except they're just half-throwbacks. Hell, not even that. Their alternate jerseys are powder-blue -- just like those worn by George Brett in the 1980s -- but whomever's in charge doesn't have the courage of his conviction, and so the Royals don't also wear the powder-blue pants that Brett wore.

For a brief spell in 1980, the Pacific Coast League's Tucson Toros looked like this: 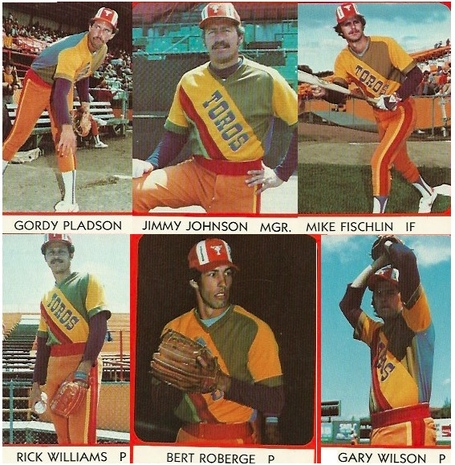 This has come up because today's Tucson Padres will host Disco Night next month, and the event will include new versions of those 1980 jerseys ...

On Tuesday, the team ordered 40 jerseys, picking the colors - Yellow Pantone 116, Red Pantone 186, Orange Pantone 172 and Blue Pantone 287, if you care about such things - based on the Astros colors from the 1980s.

Sounds great, right? Ah, but this Tuscon club lacks the courage of its convictions:

They'll wear white pants rather than the team's 1980 orange ones (yes, they managed to go 87-59 while wearing orange pants), and an orange cap with a white Toros head. The original 1980s cap had white stripes on either side of the bull (The '80s!), but that was too hard to recreate.

Really? The 1980s cap was too hard to recreate? Has cap-making technology really gone backward in the last 33 years? Of course, what really bothers me is the white pants. It's the colored pants that MAKE THE UNIFORM.

I love all the retro throwback history stuff, and the more bizarre the better. But call me when you're ready to make like Raspberries, and go all the way.