Have you ever wondered who's the slowest player in the game?

Of course you have.

Has anyone ever actually tried to measure that? Not that I know about. How would you even go about doing that?

Well, it's been done. And cleverly, too: Baseball Info Solutions has timed players going home to first base on potential double-play grounders; theoretically, at least, the runners should be running as hard as they can every time.*

Here's their five slowest runners in the majors: 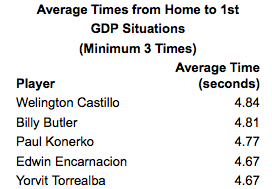 This is just a tease! How many opportunities did these guys have? Who's the sixth slowest? And who's the FASTEST? I'm going to hope for some comprehensive data in the next edition of The Bill James Handbook, due in a couple of months. Until then, I will mention this caveat: Given the relatively small number of data points here, we can imagine some issues. Measurement error, for one. There's not much difference between 4.84 and 4.81 and 4.77 seconds, and I wouldn't be shocked to learn that Paul Konerko is actually slower than Welington Castillo. Another issue: While this method is supposed to ensure that only maximum-effort sprints are counted, slow players are so slow that they do sometimes pull up short even on double-play grounders, if the play won't be close. And some of them aren't.

All these things should wash out given enough data points. But I don't know if there are enough data points. I think all we can say for sure is that Welington Castillo and Billy Butler are really, really slow. Which we knew already. But it's nice to have some pretty numbers.