A big crash put enough wreckage on the course that the race was stopped.

A hard crash knocked frontrunners Ed Carpenter and James Hinchcliffe out of the Indianapolis 500 and then Townsend Bell hit into the wall on Turn 2 with only a handful of laps left, forcing the race to a red flag and the cars into pit row. A caution had been called on that turn just before the crash occurred.

Bell's crash damaged the wall and a repair crew quickly came out to fix it. 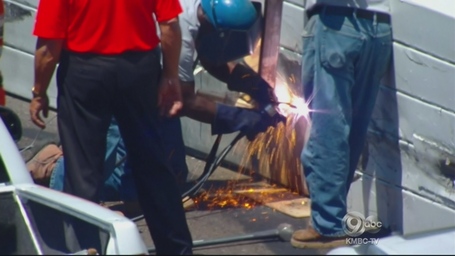 The race had just been restarted for an accident involving Scott Dixon when Hinchcliffe dove underneath Carpenter into Turn 1, who was to the inside of Townsend Bell. The trio then bumped wheels which sent Carpenter into Hinchcliffe and both into the wall. Neither driver was injured.

An upset Carpenter, who started on the pole, walked over to confront Hinchcliffe before throwing his hands up in disgust. Carpenter, an Indiana native grew up approximately 20 minutes from Indianapolis Motor Speedway and has spoke openly about his desire to win in front of his home state fans.

Helio Castroneves is leading 15 laps from the finish. With a victory, the Brazilian would become just the fourth driver to win four Indy 500s joining A.J. Foyt, Al Unser Sr. and Rick Mears.