FC Barcelona beat a feisty Deportivo La Coruña side 5-4 Saturday evening in Riazor, hanging on to their eight-point Liga lead in an epic nine-goal thriller. Despite the close-seeming scoreline, the blaugrana never looked to be in a lot of trouble: they jumped out to an early 0-3 lead within twenty minutes, and despite a gutsy performance from their northern hosts--and the loss of Javier Mascherano to a red card at the beginning of the second half--the Catalan side remained steadily in control. Leo Messi scored twice for Barcelona, with Jordi Alba scoring twice (one was for Deportivo, however), and Tello adding a well-taken goal; Pizzi (twice) and Alex Bergantiños netted for Depor, who showed a tremendous amount of pluck against the much-stronger Barcelona.

The first half could not have started better for Barça: they came out attacking, and within three minutes Cesc had fed Jordi Alba with a long through ball, and after a deft touch, the ex-Valencia man dropped the ball past Aranzubia. Within five minutes, they would strike again, with Iniesta beginning a brilliant little combination by robbing a ball in midfield, then dropping to a running Messi, who found Tello in the area. Tello, controlling the ball, slithered past a defender and slammed the ball under Aranzubia. And they'd do it again within ten minutes of the second goal: Cesc, controlling a pass from Mascherano, flicked the ball with his heel to Messi, who slammed it into the center of the goal. 0-3 after eighteen minutes.

And that should really have been it.

But it wasn't--well, not entirely. The problem with this Barcelona side--just as with the current iteration of Real Madrid--is that they're suffering from a couple of fairly serious injuries to their back line: Puyol and Piqué are both down, forcing Mascherano and new acquisition Alex Song to play center back. Dani Alves isn't really a defender, but more of an attacking wing back (plus, he's injured too), and Jordi Alba fits into that attack-first role, too.

However, this really hasn't been a problem for Barcelona yet: their defense is pretty much their offense (there has been a lot of ink spilled about tiki-taka as a defensive strategy, and I tend to be completely in line with that viewpoint), and the only teams that have been able to challenge their on-the-ball superiority have failed to take their chances well (Real Madrid could easily have won the clásico last week, and Sevilla, well, they suffered some pretty bad luck--and some pretty Oscar-worthy theatrics from Cesc).

So today was no different, really--except for the fact that Barcelona's back line turned what was shaping up to be a 6- or 7-0 game into a 4-5 scramble. First, Mascherano fouled Pizzi in the area about ten minutes after the third goal--there remains a lot of uncertainty about whether (a) there was a foul at all and (b) whether, even if there was a foul, whether it was in the area at all. I tend to think that it wasn't a foul at all, but that if it was it wasn't clear where it occurred. Anyways, it was a pretty odd call, and one that you don't normally see fall against Barça.

Here's a picture, not that it really matters: 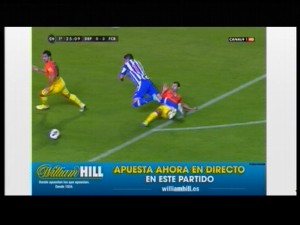 So Pizzi drew Depor back, but no sweat--this is Barça and they're still up by two, which is pretty much impossible to overcome, even for Real Madrid, much less Depor.

Then, Alex Bergantiños, a player I'd never really heard of before this match, unleashed a shot from the top of Barcelona's area. Somehow, it bounced through the wall of players, and past Victor Valdés (who could have done much more). Valdés has these moments on occasion where he makes people remember why Casillas (and Reina) are ahead of him on the Spain depth chart. This was one of those moments.

Suddenly it was 2-3 in the 40th minute. Barça's defense looked geriatric. Depor was on the run. It was Messi time.

Cesc, receiving a ball in the middle of the field, picked out a long ball diagonally through the defensive line (I don't know what Depor was thinking playing a high offsides trap--Barça feeds on that, it's their life blood) and found Messi running behind. 2-4, and things were back on track.

At the beginning of the second half, things started to sputter again for the Blaugrana. First, Busquets fouled Pizzi at the top of the area. Then, Pizzi, in a brilliant display (almost Ronaldo or Messi-like) slapped a dipping ball right into the top left corner of the goal, past a frozen Valdés. 3-4.

Then, Mascherano got involved. Riki, running carefully with the ball down the side, tried to get past the Argentinian with a little move; Mascherano bowled him over. There was certainly contact, but it might not have been been enough to justify what happened next: second yellow for the enforcer. Barça were now clinging to a 1-goal lead with a half to play, and were down to 10 men.

And, just like that, Leo Messi would come to the rescue. Again. The little Argentine scurried past maybe seven players outside of the Depor area, shaking off hit after hit, and then slotted the ball on the ground past the keeper. Epic. It was classic Messi--you knew it was coming before he even started running.

Second later, Jordi Alba would make it 4-5 with a particularly stupid play, but the game was already in Barça's hands. Alba stole a ball from a charging Pizzi (amazing on the afternoon), and, in a misguided attempt to clear the ball over the goal, chipped Valdés with a perfect little banana shot. The ball dropped right into the goal--the look on Alba's face was pretty priceless.

But the game belonged to Messi and Cesc (and a little to Barça's defense, who seemed intent on making it interesting). It was a thriller, a helluva match that showed both why Barcelona are so hard to beat, and why they might be very beatable right now.

We'll have to see if anyone will be able to capitalize.