Ryan Lochte is pretty laid back, but is reportedly a total fashionista with designs to be a clothing designer after he quits swimming. He also channels his inner Imelda Marcos and Carrie Bradshaw in how much he loves shoes.

Share All sharing options for: Olympics 2012: Ryan Lochte Owns 130 Pairs of Shoes and a Pink Speedo

Ryan Lochte, the sculpted 27-year-old American swimmer expected to win multiple gold medals, is the sex symbol of the London Olympics ... or so the New York Times tells us, in a story that was a good excuse for the paper to run six shots of the dude.

Lochte is pretty laid back, but is a total fashionista according to the Times, with designs to be a clothing designer after he quits swimming. He also channels his inner Imelda Marcos and Carrie Bradshaw in how much he loves shoes:

"Ho, I think I have about, a total of 130 pairs of shoes," Mr. Lochte said, warming to the subject. "So you can say I like shoes." ("Ho" is another Lochte-ism, kind of like the inverse of Homer Simpson’s "D’oh!") For the Olympic trials this month, he plans to sport high tops with star-spangled wings, like an all-American Hermes. "Don’t duplicate!!" he wrote, posting a picture of them on Twitter.

And he’s already considering his London wardrobe. Having to stick to the official Olympic team uniform designed by Ralph Lauren "stinks," he said, "because I really want to wear my shoes." He plans to accessorize with diamond bracelets and some new grillz: "Maybe like red, white, blue — a flag, so when I smile, it’s like, pshoosh!" he said, imitating the sound of a firecracker.

Lochte was also shown this month -- shirtless, of course -- on the cover of Vogue magazine:

His fashion credentials got a huge boost his month when he became the fourth man to grace Vogue’s cover, in a spread photographed by Annie Leibovitz. Of the cover boys, "I’m the only one who had two girls," he boasted playfully, adding that the response to his chest-baring image has been "insane."

Whenever I read these kinds of profiles, I always wonder if the subject can possibly be gay; we read that Lochte goes out on a lot of "bad dates," but that’s about it. So there is hope! In reality, though, there are so many twentysomething guys I know who are into their looks and design who are not gay that I have no idea which way Lochte swings. But he does like pink -- or, at least, he wore a pink Speedo of his own design.

If the Times can run six Lochte shots, we can do better, and even throw in one of him and the pink Speedo. Can’t wait until the Olympics! 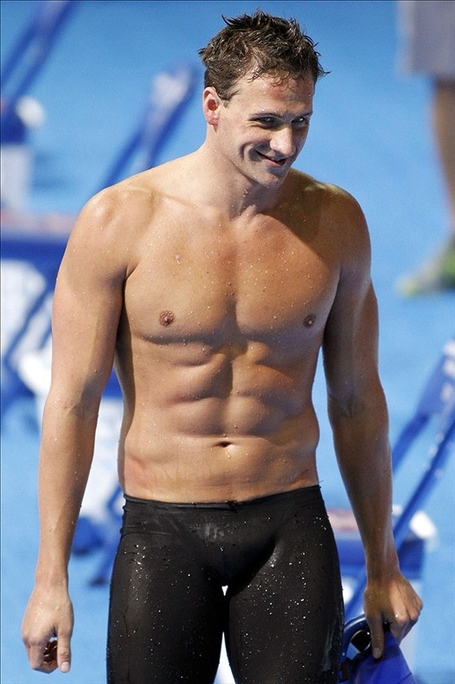