There are 29 different sports at the Summer Olympic Games, many of which you may be unfamiliar with. Jon Bois is here to help. Having lived in Atlanta during the 1996 Games, he is an expert who knows a lot more than you.

Hey, guess what? Do you want to know what? Do you want to guess what? Well, when I was a kid, I lived in Atlanta during the 1996 Summer Olympics. I went to multiple events and I even had a shirt about it. That means I know more than you about the Olympics and that you do not know anything. After you read this, I will still know more than you but you will still know a little bit about them (the Olympics).

Where the h*ck is London, anyway?

The 2012 Olympics are being hosted in London, England, which you may have never heard of. Not all of us have subscriptions to map.com, so here's where you can find it: 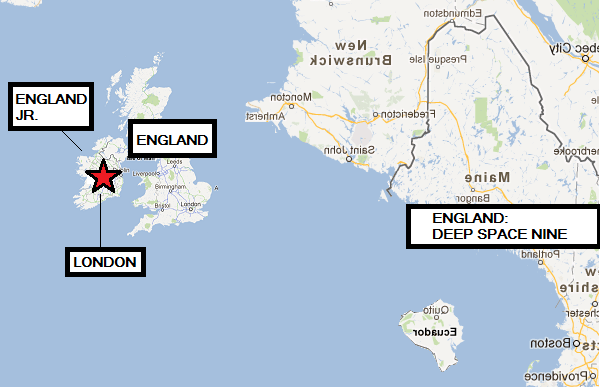 Atlanta was a way better Olympics city, though. Remember, I went to those Olympics (and you didn't).

Many Olympic Games hold events in order to keep the athletes from getting bored. What follows is a thorough explanation of 10 sports in the 2012 Games. We'll have the other 19 sports on Wednesday and Thursday.

History: Archery was developed in ancient Greece out of simple convenience. Greeks could never decide whether to play the harp or kill people, and the bow and arrow was their way of doing both at the same time.

The sport: A bunch of jerks get together and fire arrows at a target. These arrows are capable of reaching speeds up to 15 mph (10 kph), so LOOK OUT!!!

Here is how the scoring works. 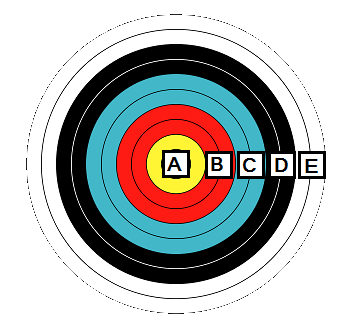 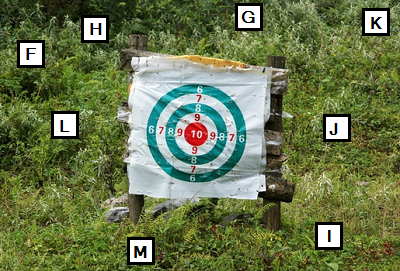 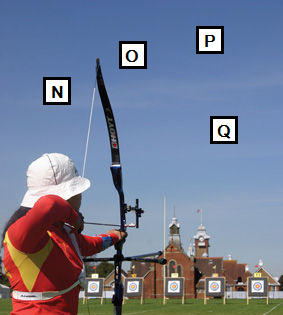 N - c'moooon who cares
O - just see if you can hit that plane
P - c'mon mom's not looking just do it do it do it do it
Q - yeah i don't know what happened mom, he just went like "who gives a butt" and just shot it, i tried to stop him

Are there any keychains about archery? Yes.

History: In 1990, an influential member of the International Olympic Committee penned the following letter to his associates.

Let's have a flippin' sport in the Olympics for athletes! The Olympics are full of athletes. We should have athletics. Folks runnin' and jumpin' around.

P.S. do you guys want to do some corruptions

Everyone else knew, of course, that the Olympic Games are all athletic events, but he had such clout within the IOC that no one dared cross him.

The sport: An event known as "Athletics" was instituted, in which competitors must come up with the most Oakland Athletics player they can possibly think of.

This is a highly sophisticated competition. Simply naming the most notable Oakland Athletic, such as Jose Canseco, won't win you anything. You must also avoid entry-level kitsch such as Todd Van Poppel or Carney Lansford, but you must also be careful not to confuse this with an obscurity contest -- don't try to get cute with an answer like Chad Harville or something. Previous winning answers have included:

Are there any baseball cards about Athletics? No.

History: In the 1700s, Britain and all her colonies leveraged their combined creative powers to to come up with tennis and like 25 sports that were one to five percent different from tennis. These sports, as well as soccer, are wildly popular in Britain because throwing things is forbidden.

The sport: It basically looks like tennis, except it looks like the thing being hit around is a Kleenex with like a pound of snot blown into it.

In the Olympic Games, there is a "mixed doubles" badminton event, which involves teams of one man and one woman. Until this year, when the same will be instituted for Olympic tennis, badminton boasted the only thing close to a high-profile sporting event that had men and women playing together. This doesn't sound all that weird at first, because we're so used to gender segregation ... but then you have this moment when you stop and think, "wait! That's so f***ing weird that we do that!"

Are there any incomplete puns about badminton? Yes. "BadmIntentions."

here is a video about basketball

Are there other videos on the 'net about basketball to check out? no

Does anyone have any opinions on basketball? no

History: Bochristing, or boxing for short, was devised by Hollywood as a storytelling element in the 1970s. Over the years it developed a "sport-within-a-sport" quality, in that boxing experts efforted tirelessly to convince the rest of the world that anything about it is more complicated than, "punch the other guy in the face."

The sport: Punching the other guy in the face.

Are there any classic films about boxing? Yes. (BoxWarz, Boxing Guys)

History: Canoeing was invented for people who wished they could be rowers but just couldn't stop falling out of the boat.

The sport: Most people hold the misconception that "canoeing" implies a race of some sort. This is not so, it's really just a matter of a bunch of jerks getting in their canoes and dorking around for a while.

So how do you work these things? Here's a diagram illustrating the canoe's control panel: 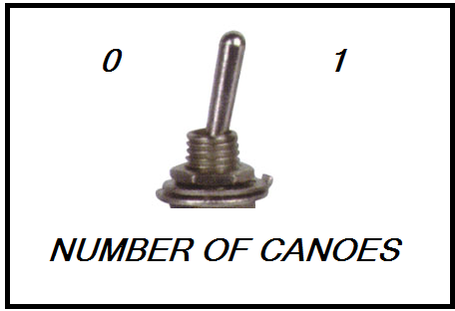 If you flip the switch to "0", it activates a pulley that unplugs a hole bored into the hull, sinking the canoe. It's certainly a rookie mistake. In a 10-canoe event, it's typical to see at least three or four of the canoes sink for this reason -- even in the highest levels of competition, because again, canoers.

Is this going to make canoers angry? Nah, they pretty much know what's up.

History: Oh I got a story 'bout cyclists! Just the other day I was drivin' down Newport Road to get some Arby's. (There are two of 'em on Newport Road, but I just drove past the first one, 'cause every time I go to that one I always find at least three or four Homestyle Fries in my Curly Fries.) So I was drivin' back from that second Arby's, and this fella on a bike is on the road!

He's just ridin' in the middle of the road! It's like he thought it was a car or something! You know, they got all kinds of parkin' lots you can ride around in on your bicycle. Like that one by the movie theater. 'Cause what if I hit you, and then I'M responsible? ROADS. ARE. FOR. CARS. I just don't think you oughta ride a bike on the road. I just think the road is for cars. That's what I think about it. That's just the way I feel about it. My Arby's was cold by the time I got home. Anyway, that is the history of bicycles.

The sport: Competitors climb on their bicycles and see how long they can stay on them before the bike falls on its side. This is really hard to do. Have you ever been on a bike? It just falls over.

Are there any slogans about cycling? Yes: "Duce. Use. Cycle."

History: Every four years, this event attracts such notable competitors as Michael Schumacher, Jeff Gordon and Danica Patrick. Nobody has ever really won.

The sport: Champion race car drivers register to compete from all around the world. Usually, it works like this: the driver shows up in his fire suit, ready to race, and then realizes he has misread the registration form. "Sorry," they say, "you did not register for driving. You registered for diving."

Nonetheless, they are contractually obligated to "compete" in the completely made-up sport of diving. "First," they instruct, "take off your suit and wear nothing except for these goofy-ass underwear. Now climb this ladder, walk off this plank, and jump into the water and get all wet in front of everybody."

At this point it's transparently obvious to the driver-turned-"diver" that this is just a cruel attempt to humiliate him. "This isn't a sport. There's no goal or ball or concrete objective. You guys are jerks."

He is wrong, however. Diving has evolved into a sophisticated sport with a grounding in objective assessment and scoring. Here is a sample diving scorecard. 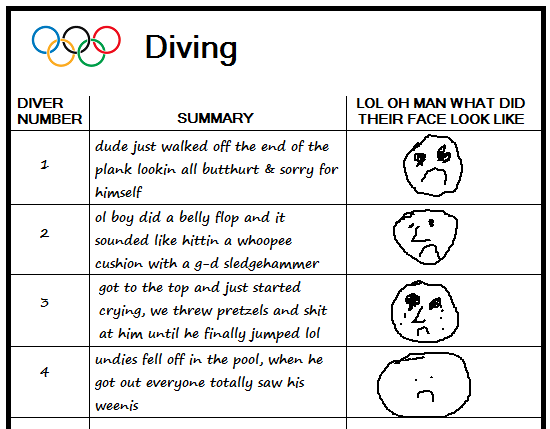 Is falling in the water ever a good thing? No.

This is actually a pretty neat sport once you understand what's going on.

Some compliments to get you started:

I get the feeling that a while back, perhaps in the 1950s, the IOC was getting ready to drop equestrian as an Olympic event, but they just couldn't pull the trigger on account of how amazing it is to watch. Not equestrian, mind you, but the massive quantities of shivering insecurity exuded by these people.

I searched "equestrian" on YouTube, hoping to find video of an event, or maybe an explanation of the sport. Nope! It's all just a bunch of equestrian fans going "nyaaahh our sport is great nyahhhhh thhhhtppptptbt." Here were the top search results:

You get the idea. 15 minutes ago I had no stance, positive or negative, on equestrian. Thanks to YouTube, I now hate it and think it's stupid. Dear equestrians (this is like calling basketball players "basketballs," by the way): equestrian is a) not a sport, and b) the worst sport, simultaneously.