Team USA Does Mall Cop Impression On Segways In Barcelona

Share All sharing options for: Team USA Does Mall Cop Impression On Segways In Barcelona

When I think of things an NBA superstar would describe as "Too much fun," my mind goes to making millions of dollars, dunking, winning championships, using those millions of dollars and seeing the world. But Deron Williams used that phrase to describe an apparent Team USA excursion on a Segway. 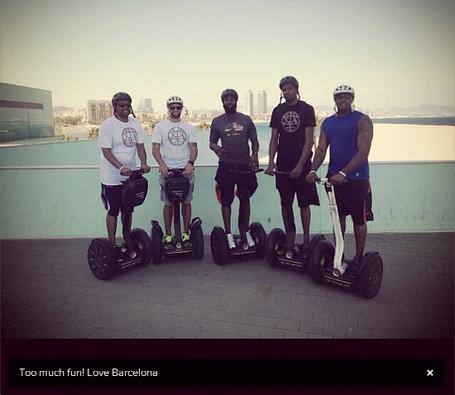 You can obviously tell which of the five riders are James Harden and Kevin Durant, but the guys on the ends are anyone's guess; Williams appears to be the second Segway-er from the left, although since you can't see his trademark awful hairstyle, I guess you can never be too sure. D-Will got behind the lens to get candid shots of Harden and Durant, which you can find among other Instagram pictures of the day that Trey Kerby helpfully compiled at The Basketball Jones.

The only thing in any of the pictures that casts even a bit of doubt on whether this was actually fun is Durant's expression in this picture. He seems skeptical about the endeavor.