Jon's three-part introductory series to Summer Olympic events concludes with this thorough explanation of table tennis, weightlifting and more. Remember: he's been to the Olympics and you haven't. He is right and you are wrong.

Bad news, everyone: this year, the table tennis event is being hosted in your high school friend's basement.

As you'll surely recall, the confines were far from ideal. There wasn't much room in which to work, so whenever you had to field a drop shot to the side of the table, you usually ran into one of the flimsy faux-wood-paneled walls.

Let's break it down: 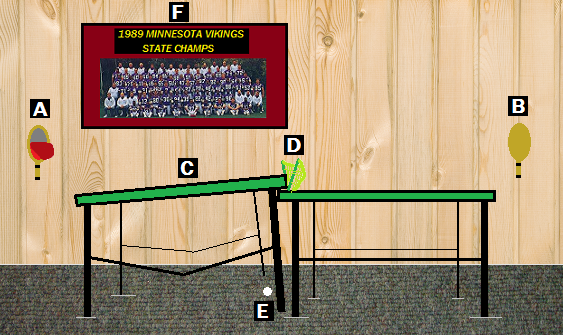 A - The crappy paddle. The rubber padding has peeled off halfway, so it flaps around whenever you swing. This is the one you're usually stuck with.

B - The less crappy paddle. It's just varnished wood, no padding at all. Sometimes your friend's dad wanders downstairs and asks for a game. He insists on using this paddle, which he calls, "ol' trusty." He gets f***ing destroyed.

C - The tilted half of the table. The one constant among basement ping-pong tables is their half-broken nature. The end of one side sort of overbites on the other. Perhaps ping-pong tables are poorly-designed, or perhaps we were always just too dumb or apathetic to fix them. Either way, this side is impossible to play on.

D - The net with an impossible amount of slack in it. The end poles are all bent out of shape, and held to the table with clamps that have dug into and scratched the wood.

E - The ball. Dents have probably been repaired at least once with the aid of a cigarette lighter. After every point, due to the tight dimensions of the room, it invariably bounces directly underneath the center of the table.

F - A cherished piece of memorabilia that your friend's dad has decided to hang in this room for some irrational reason. You are perpetually terrified of running into it and breaking it, and for good reason, because someday you will.

The IOC felt the Olympic shooting event was becoming too easy, so in 2000, it instituted a challenge: rather than making the targets smaller, they simply printed messages on the target to demoralize the competitor. 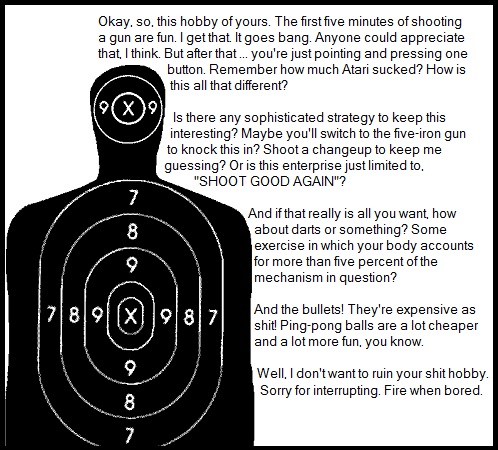 This has proven almost too effective. In 2004, the men's 50-meter pistol champion won the gold by virtue of being the only competitor to fire a shot; he apathetically fired a round in the general direction of the target before putting down his gun and wandering away. In 2008, nobody bothered shooting at all, and no medals were awarded.

nobody knows at the same time

Taekwondo is translated as, "the way of the hand and foot." Here are the four moves of Taekwondo.

Now that Olympic baseball has been discontinued, tennis serves as the Olympics' premier "novelty" event. After decades of competitive table tennis, the IOC decided to inject some light-hearted fun into the proceedings by creating a jumbo-sized interpretation. 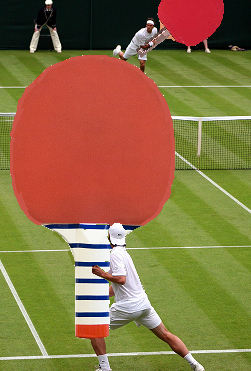 The triathlon is the Olympic Games' greatest test of cardiovascular endurance, but it's an even greater test of one's spirit. This event is comprised of the following components:

Holy shit. Another sport that's like a three-percent variation on another sport. What the f***? A sport could be ANYTHING. I mean, we have one where you hit a ball through a landscaped field into a hole. In another, you cycle across a countryside, utilizing any number of exotic tactics along the way. In another, you employ a number of sophisticated fighting techniques to physically submit an opponent. A sport can be anything! ANYTHING!

Shit, maybe, like, a bridge-building competition, in which two teams race to be the fastest to build a makeshift bridge across a river. I don't know, probably a shitty idea, I'm just thinking out loud. Just try something different. Don't just sit down and make "tennis" and then "50 f***ing billion variants of tennis." Are you being this dense on purpose? You have to be. Volleyball f***ing sucks and I hate it.

OK, OK, let's try this again. Try to come up with an original sport. I'm sure this next one will be better.

Handball, but in the water! God, I give up.

I keep waiting for a "Gordian knot" moment, in which someone picks up a barbell and sets it on a shelf or something. "See?" he will say to everyone. "You can just lift it once, and it will stay there on its own. You don't have to keep lifting it." I still haven't seen it.

In the meantime, here are some weightlifting tips.

"Greco-Roman wrestling is like the WWE ha ha ha ha!!!" I bet actual wrestlers are so tired of pro wrestling references by this point. Olympic wrestling is a proud art, and it's nothing like the spectacle we see on Monday Night Raw.

The real wrestling happens behind the scenes, when one wrestler boards a helicopter to visit the cavernous mountain lair of another wrestler and his bevy of lounging vixens with no apparent job description. This is what actual wrestling looks like.

Well, that's it. I have told you everything you could possibly hope to know about the Olympic Games. Since you've never been to the Olympics (like I have), you will never truly understand it like I do (since I was there).