Opening Ceremony Drinking Game: Prepare To Get Bladdered Off Your Arse

The Opening Ceremony for the London Olympics may be the Most British Thing Ever. It deserves a drinking game to inspire our cheapest, most insulting Cockney accents.

Share All sharing options for: Opening Ceremony Drinking Game: Prepare To Get Bladdered Off Your Arse

Four years ago, Beijing opened the Summer Olympics with a dazzling performance of inhuman precision, the sort of clockwork perfection that can only happen when you have a nation of one billion people living under communist rule. With the 2012 Games upon us, London has the daunting task of matching Beijing's spectacle -- a fool's errand taken up by artistic director Danny Boyle (Slumdog Millionaire), whose vision seems to be "include everything British ever."

Indeed, what London lacks in precision group drumming it will make up for with nods to British culture: British music, British literature, royal figures, and crumpets -- all of the crumpets! It will be either a grand tribute to England as the Games begin, or a hilarious Frankenstein of cultural history ("No, no, no! The 40-foot Voldemort is supposed to come out to the Sex Pistols' cover of 'God Save the Queen'! Don't cue 'Hey Jude' until the 30 Mary Poppinses start descending from the sky.") Regardless, the event calls for a drinking game.

GROUND RULES: This drinking game can only be played with beer or spirits made in England (this is your time to shine, gin!), or possibly mulled wine. Don't try it with American liquor, or it won't work. And before you ask, Scotch and Irish whiskey don't count. This is a tribute to England, not the upstart countries that got dragged into the United Kingdom. And, of course, this game should only be played by those of legal drinking age. Here we go! 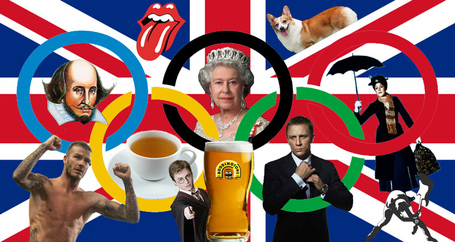 ONE DRINK per British literary character. No duplicates (i.e., if the rumored army of Mary Poppinses is true, you only need to drink once, not once per Poppins).

ONE DRINK per song written by a British band. Take an extra drink if it is performed by the British rock legend who wrote it. If Paul McCartney and Liam Gallagher sing "God Save the Queen" while backed by Radiohead, drink everything in the house and turn the TV off. The game is over.

ONE DRINK per member of the royal family in attendance. Middletons count. ("Even Pippa?" you ask. Especially Pippa.) Take an extra drink if the royalty is part of the ceremony, and not merely attending it.

ONE DRINK any time Bob Costas adopts a British affectation.

ONE DRINK per instance of heavy-handed corporate branding.

ONE DRINK per country whose athletes have terrible Opening Ceremony uniforms. This includes Americans in berets and whatever atrocity Spain ends up in.

ONE DRINK per cheap British stereotype. This includes but is not limited to:

ONE DRINK if an NBC reporter painstakingly explains an obvious piece of British culture. Take an extra drink if the reporter has a British accent.

ONE DRINK per mention of Slumdog Millionaire.

TWO DRINKS per mention of any other Danny Boyle movie.

TWO DRINKS for any form of flight. This includes parachuting, wire-assisted caroms/jumps/descents, people getting fired out of cannons, and double-bounces on a trampoline.

TWO DRINKS if an incredibly old athlete holds the torch and you feel sad because this once-great hero of the arena is now feeble and brittle, a stark testament to the cruel brevity of life as time marches forward, grinding us all to dust.

TWO DRINKS for Richard Branson. Take an extra drink if he's with more than one beautiful young woman. Finish your drink if his shirt is buttoned up.

TWO DRINKS per nation with fewer than 10 athletes.

NO DRINKING AT ALL if Jimmy Page plays guitar. Sit there respectfully and appreciate the master at work.

FINISH YOUR DRINK for any of the following:

And, finally, FINISH YOUR DRINK when the Olympic torch is lit. Upon completion of the Opening Ceremony, do not attempt to drive or operate heavy machinery. This was fun! Let's do it again in four years.