Weightlifting At The Olympics, The Most Moving Thing In Singlets Ever

How can gigantic people in singlets, lifting large amounts of weight over their heads, be one of the most moving events at the Summer Olympics? Spencer Hall explains, with the technique and story of Matthias Steiner.

Share All sharing options for: Weightlifting At The Olympics, The Most Moving Thing In Singlets Ever

Olympic lifting is just one kind of weightlifting among many different schools of weightlifting. There is powerlifting, a burly discipline focusing on the back squat, deadlift, and bench press. There is bodybuilding, an aesthetic sport where the barbell serves as the chisel and hammer for the human form. Strongman competitions blend powerlifting, Olympic lifting, and a long series of ill-advised junkyard dares into a single, spine-snapping marvel of an event.

I will not judge any of them save one: the random gymbro's discipline, something we'll call the Cybex Swolenado. The basic guidelines for the Cybex Swolenado involve a studied series of three-to-six month programs based on extensive reading of Men's Fitness, Outside, FLEX, GRRUNT, and that thing your bro sent you about the Bane workout. None of these mention steroids, and they really should because all of them involve large amounts of steroids and eating nothing but endangered fish and green apples for months at a stretch.

This discipline is probably close to what you do. Repeat for two to three week cycles until you forget to go to the gym. When people ask what you're doing, insist you're "focusing on your cardio," and then resume watching whatever you were watching on Netflix. Repeat cycle by taking another dumb, unnecessarily complex workout out of a magazine several months later.

Unlike the Cybex Swolenado, Olympic lifting is deceptively simple, with just two movements used in competition: the snatch, and the clean and jerk. That's it: Olympic lifters practice just two basic moves, albeit moves so complex they take years to master, and separately involve no fewer than three other separate lifts in each one.

They both accomplish the same thing in variation: taking a gigantic amount of weight and putting it over your head. The "merely explosive" clean and jerk consists of two movements: the "clean," where the weight is brought off the ground, and the "jerk,' where the weight goes over the lifter's head. In the snatch's case (STOP LAUGHING) it differs by having a wide grip and the weight going overhead in one "insanely explosive" maneuver.

Both happen with a practiced swing, a smoothness all too happy to lie to the untrained eye. On some snatch attempts, the lifter looks less like they're pulling an entire 19th century kitchen cabinet over their head, and more like they're just using a loaded barbell to stretch their shoulders. It looks fine. It usually is, unless someone's elbow joint dislocates, and then there is screaming and a rush of panicking people in jumpsuits to the stage, and now you've got the one bit of lifting everyone sees in GIF form around every four years or so.

Risk is an element, but Olympic lifts involve so much more: an immense amount of effort, brute strength, balance, coordination, timing, rhythm, and most importantly, the willingness take at least your body weight and then haul it above your head in one long jump, pull, and hold. Here's a brief primer on how to do my favorite, the clean and jerk. (Try it at home, preferably when no one is home. It'll feel more intense that way.) 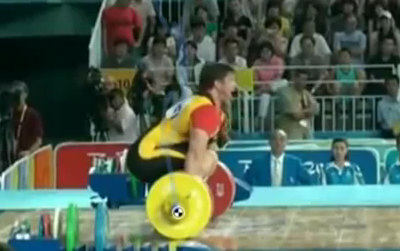 The first part is basically a deadlift. Mentally this goes from grabbing the bar, a move I call "feelin' pretty strong, y'all!" This feeling then rips off its fleshmask when I start lifting, and immediately becomes a tentacled-faced goblin I call "oh god this weighs a metric ton and is going to shatter my spine."

This happens at astonishingly low weights for the average person. For Matthias Steiner, pictured above, it occurs at a mere 400 pounds or so. For the record, that is 568 pounds you're seeing on the bar in these pictures. You are not an Austro-German neanderthal cyborg Olympian. Please remember this. 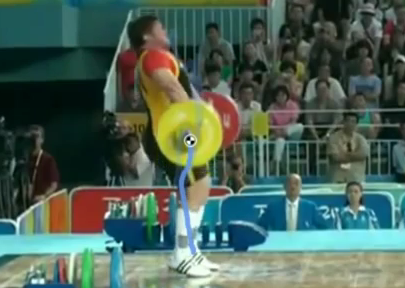 The second part is a jump and a pull, in that exact order. Attempt to pull a weight of this magnitude without opening your hips, and your shoulders will spit out your arms, the weight will drop, and you will be the human equivalent of the nylon sock men car dealerships strap to fans by roadsides, just wavin' your worthless gooey arms all over the place. Jump without pulling, and the weight levitates to around chest height and whispers "dumbass" in your ear seductively.

Please do all of this without shaving your kneecaps off with the bar. That trajectory up is straight for both efficiency and because no one likes picking their patellas off the floor. Iranian coaches recruit lifters from childhood, and the first thing they look for is not size, brawn, or strength, but rather a jaw-dropping vertical leap. This is why: in a move this explosive, it's basically one long jump to start, albeit one with up to twice your bodyweight in your hands.*

*Many Olympic lifters at staggering weights claim they can dunk a basketball. If you meet one, demand video proof. 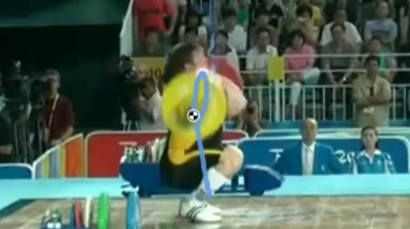 While the weight is floating upward--you got that to happen, right, even though it's as much as a really fat grown man, right?--the lifter sits down and catches the bar in a front squat. The front squat by itself is a hard lift, but the clean means catching a bar with the collarbones and shoulder muscles. At high weights this is like jumping throat-first into a noose: the weight lands right across the middle of the body, the blood pressure and heart rate skyrocket, the face flushes, and the legitimate sensation of being crushed sets in like a stroke.

The bottom of the front squat is not unlike being teleported without protection to the bottom of a very deep submarine trench. You also feel like you might crap out your soul, along with all vital organs, and turn inside out like a lamprey pulled from the depths by a fisherman. If you have ever eaten at Taco Bell, you are beyond familiar with the feeling. Since you're wondering: this is the point in competition where someone is most likely to soil themselves.*

*Really, Bob Costas has done the nation a great disservice by not pointing out this exact point in all Olympic events. 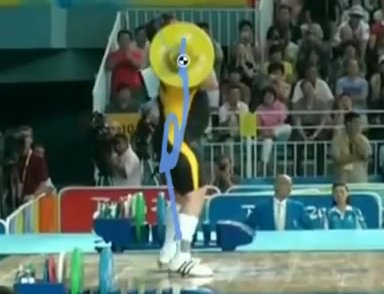 That little blue squiggle is the bar path. His is about as perfect and unwavering as one can be under the weight of 568 pounds. If you make it out of the depths of the squat, you can rack, adjust, and just chill with a baby elephant on your clavicles for a second. Matthias Steiner could do it. You really should not ever try to find out if you can, because you would most likely die or explode or both. 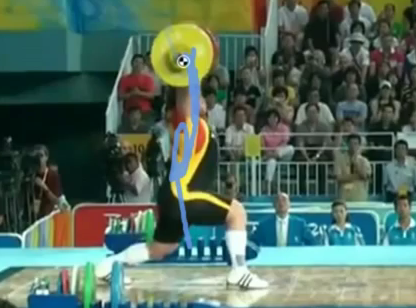 The jerk is the process of getting it over head. The very technical way of explaining this is to say that the lifter dips at the hips while remaining a positive upright posture, and then uses that momentum to start the bar upward. The lifter then extends the arms in an explosive press while dropping downward again in a split posture, and then locks out the weight over head.

oh god am gonna pass out good god this is crushing me i'm down and dip and THEN A MIRACLE HAPPENS WHOOOOO IT'S OVER HEAD wait do i have a hernia AWWWWW YEAHHHH MY BALLS FEEL GREAT! LET'S DROP THIS BEFORE I DIE

The lifter then stands with the weight overhead and waits for the judges to signal the completion of the lift as indicated by control. Then, the lifter drops the weight, and often begins crying instantly from the stress caused by the lift while rolling around on the ground like a scalded child.

The lifter in this case is you, average person. You don't cry if you do it in the Olympics. You cry because you are normal, and because olympic lifting is hard, and indeed so much harder than you know. Matthias Steiner, the lifter those screencaps are taken from, cried for different reasons in 2008. He was competing a year after his wife died in a car wreck. He had decided to go to the games on a very abbreviated training schedule, and was up against Evegny Chigashev. (You don't need to know anything about Chigashev other than this: he is huge, he is Russian, and if you painted him silver he would be throwing Wolverine in an X-Men comic.)

Matthias Steiner had never lifted 568 pounds before his final, desperate attempt in Beijing. This is what happened when he did.

He would take the podium with gold around his neck and a portrait of his dead wife in his hand. You should probably watch some lifting if you get the chance. It has its own rhythm, like a poker tournament with increasing wagers of weight, ATP, and boundless amounts of unquantifiable will. It will teach you to convert kilos to pounds quickly if only so you can gawk at how much gravity-leased weight a 130 lb Chinese woman just threw over her head. It is, at its best moments, more moving than anything involving gigantic people in singlets should be.*

*Wrestling fans, you are exempted from this statement, especially if you weep at WWE Hall of Fame induction speeches or old Rulon Gardner clips like I do.