Share All sharing options for: Michael Phelps' Day In A Single GIF

The Michael Phelps vs. Ryan Lochte battle never materialized on Saturday as the latter breezed to an easy win in the 400 IM while the former missed out on a medal. It was weird, in a way, and not, all at the same time. The 400 IM is, after all, the event Phelps was all-too-happy to retire from after the 2008 Olympics, only to pick it back up before this year's Olympic Trial.

But still, even with the layoff, Phelps was good at the 400 IM. He finished second to Lochte at the Olympic Trials, sure, but still turned in a solid time -- one that would've netted him a silver medal on Saturday. Instead, Phelps fell way off the pace and finished in fourth, surprising everyone.

This was his reaction:

And this one was altered, but it totally works (look behind Phelps): 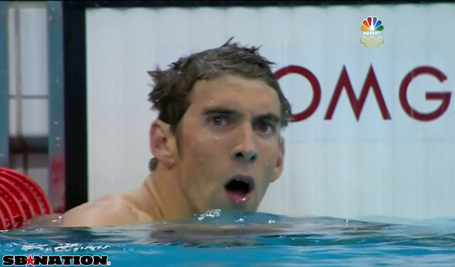 After the race, Phelps tried to figure out what went wrong. It was a "crappy race" he said, but seemed to be confused by his own performance. His coach, Bob Bowman, was also at a loss, struggling to figure out whether it was fitness, rust or something else.

As Phelps tried to wrap his head around what just happened, Lochte received his gold medal, popped his grill in and had a good old time. The two were on opposite ends of the spectrum for one day, not nearly as close as most thought they'd be in the 400 IM.

Does it matter a ton, though? By itself, probably not -- the shock of him failing to win a medal in the event notwithstanding. But if Phelps falters on Sunday, then it's time to wonder if his training was off or if he's not peaking at the right time.

If nothing else, whether Phelps can bounce back is another fun storyline to keep an eye on, in addition to his battle with Lochte that we've all been anticipating.