Share All sharing options for: Problems With Olympic Judging? Make It Rain

Japan took the silver in the men's team gymnastics competition on Monday, but they nearly finished fourth. Luckily for them, an appeal to the judges on Kohei Uchimura's pommel horse held up and he was given a higher score. How does one appeal to the Olympic judges, you ask? With cold, hard cash.

Maggie Hendricks of Yahoo! Sports had a lot more information about the challenge, which had Twitter in an uproar as they saw the Japanese team just straight-up handing a crisp Benjamin to the judges. The money is to ensure that countries don't just challenge willy-nilly all over the place, but this is still crazy to watch:

Oh, hey, you gave us a pretty bad score there. Maybe a discussion with MISTER FRANKLIN will make you reconsider? 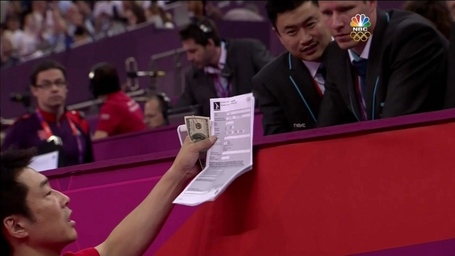 Someone call Major League Baseball. I think we have a system here for instant replay challenges that even Bud $elig can get behind.