Men are in love/lust with the Women of Orange, and a quarter of the team are lesbians.

Yahoo's Chris Chase got 5,000 Facebook likes and 644 tweets for his column extolling his love of the Dutch women's field hockey team. It was basically an excuse for him to run a bunch of pictures of the Women of Orange. A Twitter stream devoted to the team has copious posts about how hot the women are: 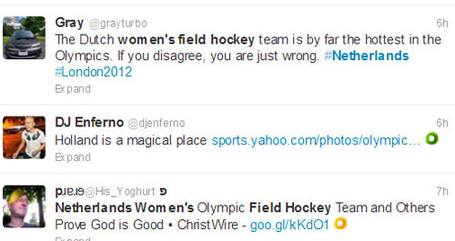 What's coolest about this is that the entire Dutch team is lesbian. Well, four of them are -- Marilyn Agliotti, Carlien Dirkse van den Heuvel, Kim Lammers and Maartje Paumen -- but that's 25% of the team. (An NFL equivalent would be 13 gay players on a 53-man roster). And there might be more since we keep getting emails from readers to add to Outsports' list of openly gay and lesbian Olympians. Even better, Paumen and van den Heuvel are a couple, and we know how that appeals to many men.

The Dutch are a serious gold medal contender, so expect the fan base to grow as the tournament progresses.