The NBA and FIBA are reportedly pushing to overhaul the current Olympic basketball system and replace NBA superstars with a team full of under-23 stars. And that would be pretty great, actually.

Share All sharing options for: An Under-23 USA Basketball Team Would Be More Fun Than You Think

Over the past few weeks, there's been a rising tide of resentment in the basketball world as David Stern, FIBA and the NBA owners inch toward a plan to overhaul the regulations for Olympic Basketball. The rumored proposal calls for Team USA and the rest of the countries at the Olympics to shift their rosters to an under-23 format that would look more like Olympic soccer.

In the end, Bryant and James deliver incredible revenue and value to the Olympic basketball tournament, and the owners are tired of watching the IOC bank it. ... There sat Kobe and LeBron on Sunday, watching the final minutes of one more USA Basketball blowout together under the Olympic rings. Take a good long look at them here in London, and understand that we'll never, ever see this again.

And especially this summer, as the basketball world soaks in Dream Team nostalgia on the 20th anniversary of their run through Barcelona, this whole thing feels pretty blasphemous. But hold on a second. Let's take a second to think about what an under-23 team would look like.

... Can we just talk about how much fun this team would be?

John Wall reunited with DMC? Tyreke coming in as the gunner off the bench? Kawhi Leonard doing his best Scottie Pippen impression? James Harden as the grizzled veteran? Anthony Davis for 30 minutes-a-game? Kyrie doing his Harry Potter routine in a real game?

It would be so much more fun than watching the current U.S. team.

Don't get me wrong: There's still something incredible about seeing the best players in world suit up for Team USA, and just watching them all walk out in the Opening Ceremony is one of the coolest moments of the Olympics. But as far as the actual games, the novelty of watching a juggernaut lazily steamroll other countries just isn't that special anymore.

When the U.S. team dominates, they should dominate -- they're working with LeBron James, Kevin Durant, and Kobe Bryant. When the U.S. doesn't dominate (like against Spain in 2008), the other teams seem more like a lingering pest than any real threat. Team USA as a marketing tool is great. Team USA as a basketball team is an All-Star squad playing mediocre teams over and over again. Eventually, it gets old.

A team of young guys add a whole new layer to things, though. Even if they'd be every bit as uber-talented and dominant as their older counterparts, just the idea of watching a bunch of 21 year-olds come into their own in the name of USA Basketball would be enough to keep it interesting. We've seen what it looks like for LeBron and Kobe to dominate and take over games -- it happens all year in the NBA. But with the younger generation we don't really know what it looks like to have them be superstars in their own right.

Would you rather watch Kobe ice international games with inevitably dead-eye jumpers, or Kyrie throwing irresponsible alley-oops to DeMarcus Cousins and Anthony Davis for 40 minutes?

For a little more perspective, back in 2008, the team might've looked like this:

First of all, MICHAEL BEASLEY WOULD'VE BEEN AN OLYMPIAN. B-Easy couldn't even stay out of trouble in a hotel room at the Rookie Symposium with Mario Chalmers. Can you imagine him and Michael Phelps taking the Olympic Village by storm in Beijing? Alas. 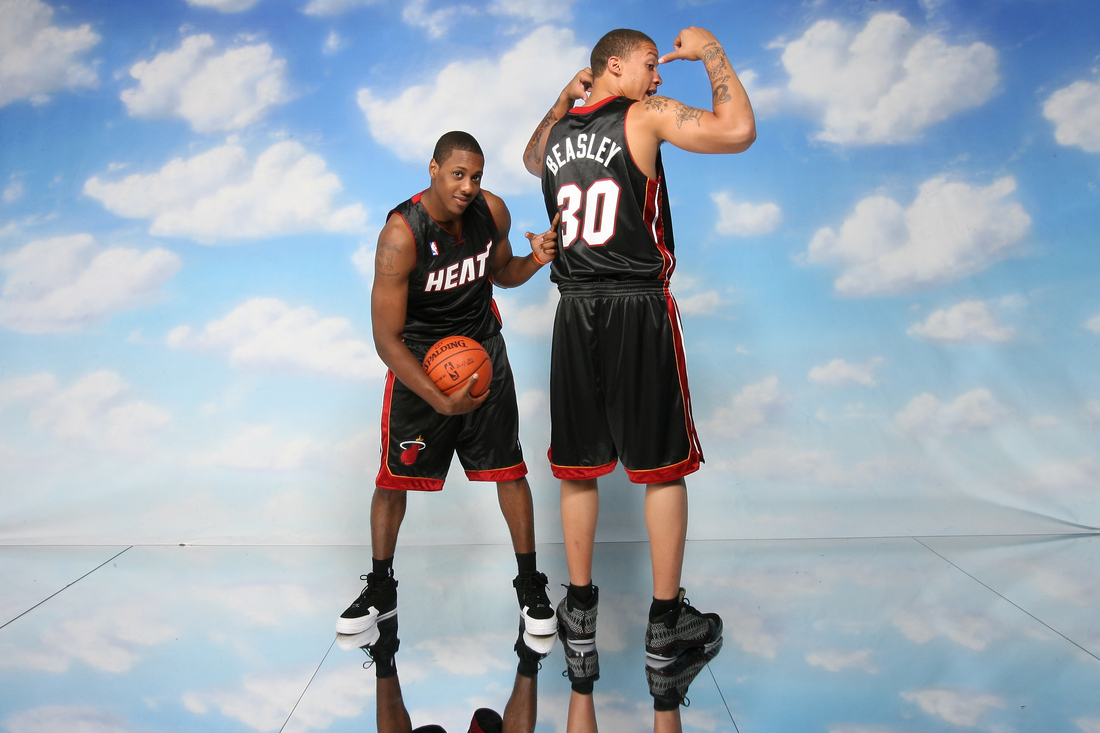 More to the point ... as much fun as we had watching the 2008 "Redeem Team" try to erase the memories of that 2004 atrocity, imagine if it had been a team led by Dwight Howard and completely unproven versions of Durant, Rose and Rondo. Suddenly, the Olympic basketball tournament goes from almost an inevitability to one of the most exciting American events we have, and the entire country falls in love with these guys about three years early.

Or, the same way U.S. Swimming pulls some of the most incredible 16 and 17 year-olds from across the country, maybe the Olympics is where we get a preview of someone like Jabari Parker or Nerlens Noel?

(Very important caveat here: International teams should be allowed to add three players over 23, just like in Olympic soccer. If Stern and the owners get their way, the NBA's international stars wouldn't be allowed to play, but even Euroleague stars would make a huge difference for countries like Brazil, Spain and Argentina. It's the smart move to keep things competitive.)

There are some perfectly acceptable reasons to hate the rumored proposal from the NBA and FIBA. It's borne out of greed and self-interest on the part of Stern and the owners, and it's trying to trick us into caring more about some trumped-up Basketball World Cup than we do about the Olympics. The NBA, of course, would have a significant profit share in said "World Cup." As it stands, the NBA gets nothing from the Olympics. So you see why some fans might feel cheated here. The only reason any of this is happening is because of money and/or TV rights.

But more money for the NBA isn't the only reason this could be great, so dismissing it because of the owners' motivations seems a little over-simplified. (And honestly, if the NBA shamelessly selling fans out bothers you that much, the NBA probably lost you a long time ago).

The American teams above aren't perfect -- especially that 2008 squad -- but that's the point. The real possibility of a loss makes rooting for victory a whole lot more fun. With the new guidelines, we'd get to watch the best young superstars blossom on the biggest possible stage, it'd be invaluable learning experience for all the players who will ultimately shape the future of the game and it'd inject new life into Olympic Basketball as an event. Instead of some glorified exhibition, we might actually get a competition again. So I guess this is just a counterpoint to all our initial instincts.

As venal as the NBA's proposal seems, it could also be really, really awesome. Now if you'll excuse me, it's time to go scour recruiting message boards to build a team for 2016.