Share All sharing options for: The Agony Of Defeat: Mountain Biking Edition

The 2012 Olympics was really great, but also really weird. You had Michael Phelps and Usain Bolt setting all-time marks, but you also had people trying to get horses to dance, or lunging at each other with television antennae, or punching each other in the dong. A real tale of two cities, as Charles Darwin once said.

One of the more unusual events? Mountain biking.

This was the scene this weekend during the mountain biking competition. 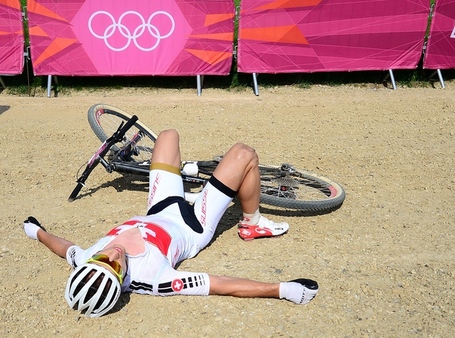 This is actually part of the event, which is what makes mountain bike such an odd Olympic Sport. See, the mountain biking event is actually nicknamed the "Good Samaritan" event. They pick a rider at random to be wounded somewhere on the course. The first person to find them and agree to nurse them back to health gets entered into the lightning round. (Bonus points if the good Samaritan is from a country that is at war with the wounded rider's country.)

In the lightning round, everyone just agrees to go out to a nice lunch at Red Robin instead. Bottomless steak fries!

By the way, that picture up there? That's the least popular tanning posture at a nude beach. Just FYI.