With the 2012 Summer Olympics behind us, it's time to delve into the medal count for a better idea of what just happened and who the big winners were.

For the past two weeks, you watched sports you have never seen before -- and likely never had heard of before -- simply because it was the Olympics. Millions of people, several of whom had no national pride to speak of past enjoying July 4th and fireworks, had a two-week fit of patriotism during which they acted like 1980s Hulk Hogan.

We cheered for athletes whose names we will forget as quickly as learned them, all in the hopes that the United States would end up on top of the medal table. Well, mission accomplished.

It looked like it would be a tight battle with China early on, but in the end, Team USA was the unquestioned winner of the 2012 Olympics, grabbing the most overall medals as well as the most gold medals.

But why just say that when we can show you with graphs. 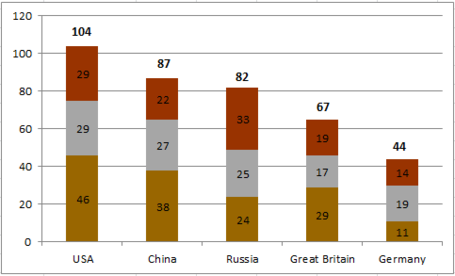 Was Team USA Really the Best?

Sure the U.S. won the medal count, but we also had 530 athletes at the Olympics. In terms of efficiency how do we stack up to the rest of the world? Pretty well actually: U.S. athletes took home 256 medals (every player on a medaling team or relay gets a medal), or 0.483 medals per athlete, which was good enough for second best. Jamaica did the best with its 50 athletes taking home 25 medals (they won 12 medals as a nation, but all their relay medals bumped them up here). And Montenegro may have only won one medal, but its 14 water polo players comprised 42 percent of the nation’s 33 Olympians. 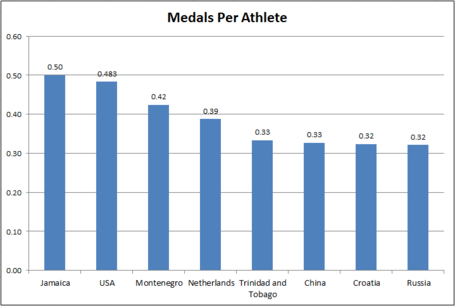 Having more athletes is not the only thing that gives a country an advantage in the medal race. Being a stable, relatively wealthy nation makes getting Olympic medals easier as well. More money tends to mean more opportunities, so with that in mind we took to find out which countries did the most with the least. The following graph compares a nation’s GDP to its medal count (GDP info taken from CIA World Factbook via Wikipedia). The clear winner here is Grenada, who with a GDP of just $800 million won a medal. 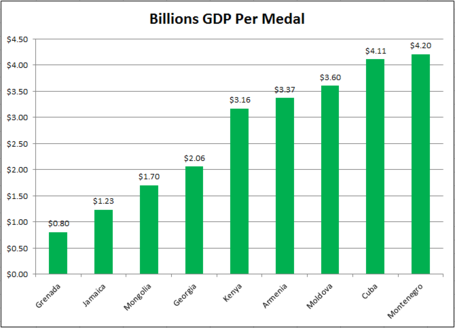 Maybe looking at medal count by countries is too small picture for you? OK, how about by continent? The following is a breakdown of how many medals were awarded to each continent – for the purposes of these graphs Russia and Turkey are considered part of Europe and not Asia. Not surprisingly, Europe is the dominant continent both in total medals and golds. 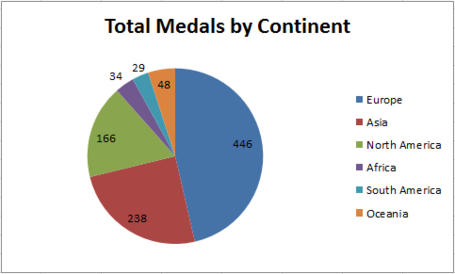 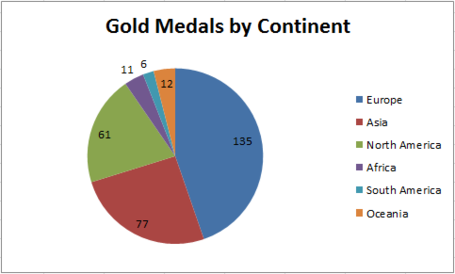 Getting away from the big picture and focusing again on America -- we won 104 medals, but where did they come from? Swimming and athletics were our big winners, which is to be expected with so many events included within each sport. We did as well as possible in basketball, but only earned two medals as compared to 31 medals in swimming. 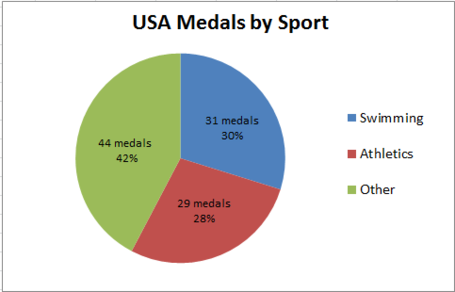 Of all those ‘other’ sports, Team USA won six medals in gymnastics and no more than four medals in anything else. A breakdown of the non-swimming and athletics medals: 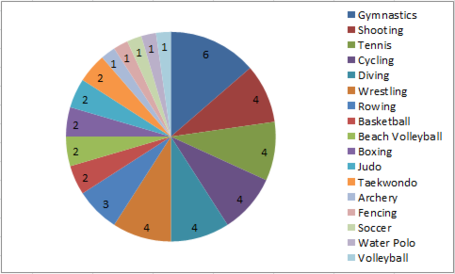 One big focus all Olympics has been on how well the women have done. This is the first Games in which there have been more female Olympians than males, and the results paid off for the U.S. The American women won 58 medals to 45 for the men. Most all of that difference shows in the gold medal count, the women took home 29 gold medals and the men just 15. 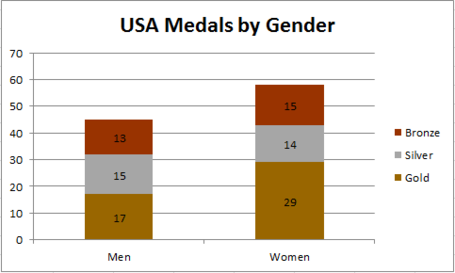 And finally, in the good ol' days, we cared about the Olympics even more because we had the Soviets to contend with, and typically they would win the medal battle. These days the Soviets are gone, but that doesn’t mean we can’t still look at how we would have done if the USSR still existed. Obviously these numbers wouldn’t be the same if the Soviets all competed as one team -- for instance, it’d be pretty hard to win both the gold and silver in team rhythmic gymnastics competing as only one team -- but the point remains that the Soviet Union would have taken home more hardware than the US of A. 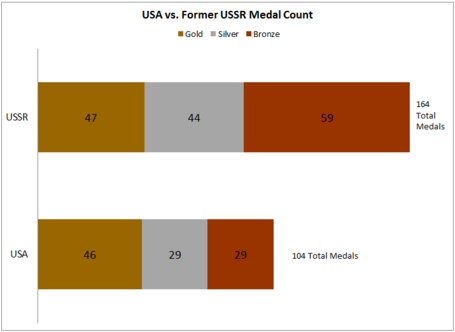 But we still won the Cold War, so at least there’s that.

For a complete breakdown, visit our Medal Count Update StoryStream.