Usain Bolt won gold in the men's 100 meter dash Sunday night at the Summer Olympics, defending his title from Beijing and establishing himself as one of the greatest sprinters the world has ever seen.

The title of The Fastest Man on Earth once again belongs to Jamaica's Usain Bolt.

The Lightning Bolt won gold in the men's 100 meters dash Sunday night at the Summer Olympics, defending his title from Beijing and establishing himself as one of the greatest sprinting athletes the world has ever seen. Bolt crossed the finish line in 9.63 seconds, 0.06 seconds faster than what he ran in 2008, which set a new Olympic record.

Fellow countryman Yohan Blake -- the sprinter who has twice beaten Bolt, including his upset at Jamaica's Olympic trials -- won silver with a time of 9.75 seconds. American Justin Gatlin claimed the bronze, running a 9.79.

The other two Americans in the race, Tyson Gay (9.80) and Ryan Bailey (9.88), were fourth and fifth respectively. An astonishing seven of the eight men went under 10 seconds. Jamaica's Asafa Powell suffered an injury and finished in 11.99.

As has become rather customary at this point, Bolt was slow out of the blocks -- Powell actually had the best start -- but by the 50-meter mark, Bolt had pulled into the lead. After the race, Bolt acknowledged his slow start, admitting that he "didn't want to false start again," like he did at the 2011 World Championships.

"I dont think it was the best reaction in the world. But my coach told me, 'The best part of your race is the end.'"

And indeed it was. Over the final 30 meters, Bolt displayed his otherworldly speed, pulling away from what was quite possibly the fastest group of humans ever assembled (as for the first time ever, an Olympic final featured the four fastest men of all time) to win by a comfortable margin. 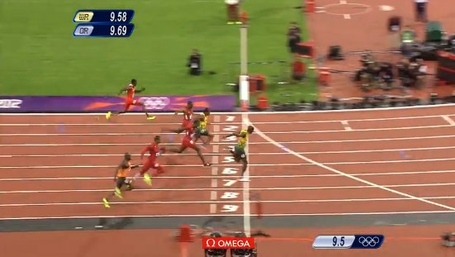 Complete results from the men's 100m: