Slave To The Black Line: How The Greatest Swimmer Became Human

The 2012 Olympiad was Michael Phelps' best yet: it marked his entrance into the human race.

Share All sharing options for: Slave To The Black Line: How The Greatest Swimmer Became Human

Two months after his 15th birthday, Michael Phelps finished fifth in the 200 butterfly at the Sydney Olympics. In the ensuing 12 years, he flirted with history in Athens, got arrested for DUI at 19, won a $1 million bonus from Speedo for sweeping eight golds in Beijing, and earned a three-month ban from the sport for taking a hit from a bong.

But he was never human until London.

It starts as a way to get you out of the house. Soccer doesn't start until September, and tee-ball ends in June, so Mom and Dad send you to the pool for the summer. As a kid, swim practice doesn't seem so bad. You learn the strokes, you go back and forth, you goof off. On Fridays you play Sharks and Minnows, trying to cross the pool underwater while your lungs burn for air.

Of course, Phelps was always a person -- human in the sense that he is made of flesh and blood, human in that he has always been beatable. Even in 2008, he achieved the epic sweep of gold medals only by the slimmest of margins: he needed Jason Lezak's brilliant final leg of the 4x100 freestyle relay to beat the French by less than a tenth of a second, and his gold in the 100 fly was by the thinnest 100th of a second. Nevertheless, prior to London, the myth of Michael Phelps overshadowed the person.

That came crashing down last week in the 400 IM.

Phelps barely qualified for the final, and it wasn't because he was coasting. "That one didn't feel too good," he said after edging Laszlo Cseh by .07 seconds for the last spot in the final. Banished to the nether waters of Lane 8 for the final, Phelps finished fourth, his first Olympic race that didn't net a medal since he was 15.

The pool becomes a second home, the lifeguards your babysitters. No bath or shower can remove the scent of chlorine from your bronze skin or sun-lightened hair. Once a week, you go to a meet, either in your home pool or in a nearby town that seems impossibly far away, Accokeek or Collinsville or Wildwood, something off the map of your tiny world. Meets last forever: you swim your warm-up in the afternoon heat to the rhythmic buzz of cicadas, compete in your individual events under darkening skies, and shout yourself hoarse during the relays, well after your normal bedtime. After the adrenaline spike wears off, muscles exhausted, you fall asleep during the car ride home. Your unconsciousness isn't sleep as much as a mechanical OFF, batteries charging for the next day's practice.

Phelps has always hated the 400 IM; he declared that he would never swim it again four years ago after winning consecutive golds in the event. So why did he enter the race in London? It's likely that he figured dropping the 200 free from his list of events would buy him enough energy to excel in the event, but I think that part of him bought into his own mystique. He is, after all, the greatest Olympic swimmer in history, a human being freakishly shaped -- long build, even longer arms -- for the particular demands of the pool. But the scoreboard tells hard truths, and a face that's new to disappointment doesn't lie.

"Just a crappy race," Phelps said, offering no excuses while dodging the shovelfuls of dirt the media tossed on his grave. Ryan Lochte had taken gold in the 400 IM, and the story was written: Lochte had been flipping tires in Gainesville as part of a grueling regimen to unseat the best in the world, while Phelps, by his own admission, hadn't felt the same desire after his record-breaking performance in Beijing. "You have four years to build up, and you're at this peak, and then you just kind of roll down the hill," Phelps told Matt Lauer. "I literally didn't do anything for six months."

It was chum for aging white sports columnists who prefer snap judgments about effort to perspective or patience. Why, Phelps didn't even apologize to the American people for being only the fourth-best in the world at swimming's most difficult race from the hardest lane to swim in! What a fraud!

You join the year-round club team and swim every day after school. You practice harder for fewer meets and higher stakes. You swim faster and have less fun. Your schedule is four things on loop: school, practice, homework, sleep. Food is inhaled in the car between school and practice, between sleep and school, less a meal than the fuel you need to power through the day's silent wet miles.

The "Lochte as king of American swimming" story line started showing cracks the next night, when Phelps swam the fastest split for the American team in the 4x100 relay, while Lochte, the U.S. anchor, was chased down by Yannick Agnel of France, leaving the Americans with silver.

Lochte and Phelps would next team up to win gold in the 4x200 free relay; it would prove to be Lochte's final win of the Games -- and the first of Phelps's four. Lochte finished fourth in the 200 free, took bronze in the 200 backstroke, then -- just 30 minutes after the back final -- took the silver behind Phelps in the 200 IM for the third consecutive Olympics. As Lochte faded under the physical toll of so many races, Phelps grew stronger.

NBC's Andrea Kremer cornered Phelps poolside: "We've seen how hard it is to repeat; how daunting is the three-peat?"

Phelps began with a drawn-out "Uhhh" as he reflected on the two individual events in which he'd fallen short -- the disastrous 400 IM and the 200 fly, where he earned silver after getting out-touched -- then let out an exhale that was almost a chuckle. "Well, I mean, I already failed twice at the beginning of the meet, so... definitely something that's very challenging."

Practice is terrible -- just you and the black line beneath you, back and forth, flip turn to flip turn to flip turn to rest. Swim-kick-pull warm-up, then pyramids or ladders or fartleks or some awful interval training that punishes lack of effort. But in the end, it's all just back and forth. No scenery, no music, nothing but your stroke and your breath and whatever fills your mind to pass the time until the next chance to rest. You never play Sharks and Minnows any more.

Throughout that Kremer interview and those that would follow his next two races -- gold in both the 100 fly and 4x100 relay -- Phelps's smile revealed something deeper and more meaningful than we saw in '04 or '08. In Beijing, guided by the mission for eight golds, every victory whoop felt like a step towards a magnificent and inevitable greatness. There was no past or future, only his invincible present.

Not so in London. Phelps left whatever disappointment or failure he experienced during the 400 IM in the water when he climbed out of the pool. And what emerged from Lane 8 wasn't Michael Phelps: Unfeeling Swimming Machine, but Michael Phelps: Grateful Human. If Beijing was a present absent of past or future, Phelps's final races in London combined all three tenses. With every additional gold, Phelps seemed caught between several desires: to reminisce about his career, to savor the fleeting moment, and to dismantle the suspicion that he'd return for the 2016 Games in Rio de Janeiro.

After his final Olympic race, 100 meters of butterfly that gave Team USA a lead it wouldn't relinquish in the medley relay, NBC's cameras caught Phelps looking at the pool as he walked away a final time. 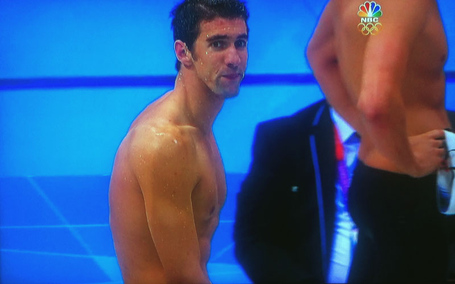 A second later, his teammates embraced him, and the moment ended. But for a few frames on my television, Michael Phelps's face showed everything: wistfulness, satisfaction, remembrance... He looked like a man giving one last look to a loved one, acknowledging a final goodbye.

School's out, but you're waking up two hours earlier for the outdoor season. Practice starts in early June, at dawn, in a pool filled with tens of thousands of gallons of water fresh from a spout with only one setting: cold. On the first day, no one wants to get in. Shivering in a Speedo in the cool morning air is preferable to the icy misery and wet exhaustion that awaits you. Eventually, you take a running start and dive in and wonder why you do this.

It gets harder to dive in every year.

Michael Phelps has a life to live. "I wanna go all over the place and visit cool cities," the 18-time gold medalist tells Bob Costas, as if he hadn't been to Sydney as a high school student or conquered Athens while still a teenager or made history in Beijing. As if he wasn't giving the interview in a modern metropolis where you can visit a castle that served as a prison 1,000 years ago.

But this is different. This is the life of Michael Phelps, Human. His travels will no longer involve pools or the Olympic Village. He wants to improve his golf game. He wants to dive alongside great white sharks in South Africa with Chad le Clos, the "beautiful boy" who out-touched him in the 200 fly. He wants to go to Rio in 2016 with his mother -- as a spectator.

For the last two decades, Michael Phelps has lived flip turn to flip turn, anchored to the black line below, alone with his thoughts or whatever OCD chant kept his stroke regular. He won 18 Olympic gold medals thanks to biology, talent, and years of hard work. "I don't care what the headlines are. I don't care what anyone else says," he told Lauer. "If I can say my career has been a success, that's all that matters."

He's half-right. His career was a success, but that isn't what matters. The important part begins now.

Over And Out: Michael Phelps Leads USA To Gold In Final Race