The bronze medal also went to the United States, with Kellie Wells finishing in 12.48. Lolo Jones -- looking to make up for a disappointing performance at the 2008 Summer Olympics in Beijing, when she stumbled over the second-to-last hurdle -- finished in fourth place (12.58), missing a medal by just 0.11 seconds. Only three-tenths of a second separated the top six finishers. 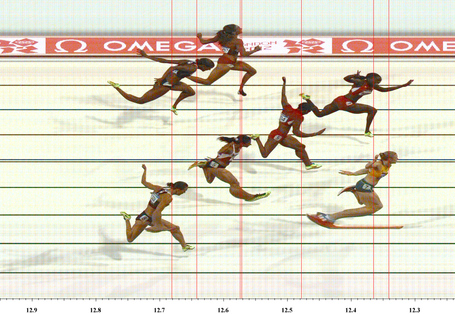 (Photo by Omega via Getty Images)

For Pearson, the continues her recent domination of the event -- she adds Olympic gold to her already long list of accomplishments in the 100m hurdles, which includes a silver in Beijing and a world championship in 2011.

Harper, the bronze medalist at last year's IAAF World Championships, led for much of the race, but Pearson drew even with around 30 meters to go, then pulled ahead over so slightly after the final hurdle and managed to out-lunge Harper at the line. Harper's time of 12.37 seconds is not only the fastest losing time at the Olympic Games -- it's the fastest second-place finish ever.

After nearly missing out on qualifying for the finals, Jones turned in her fastest time of the season, 12.58 seconds.