The Olympics' 15 Most Terrifying Mascots Ever Created

All Olympic mascots are weird and creepy. All of them. Here are some of the all-time most nonsensical mascots from the Olympics.

Share All sharing options for: The Olympics' 15 Most Terrifying Mascots Ever Created

As the 2012 Olympic Games in London has reminded us time and again, every Olympiad is amazing and awesome, full of unbelievable moments of triumph and defeat. But as the Opening Ceremony of the 2012 Olympics also reminded us, the Olympics is always full of a lot of stuff that is super, super weird.

One of the weirdest things about the Olympics, year in and year out, is the IOC's (or whoever's) insistence on having an Olympic mascot. A cute, cuddly something-or-other that you can put on T-shirts or make into stuffed animals or something with which to generally terrify children. The problem is that very few of these Olympic mascots have been cute or cuddly. Usually, they end up being some poor sap in a dead-eyed fursuit that makes everyone vaguely uncomfortable.

Join us as we revisit 15 of the most bizarre, nonsensical or otherwise horrifying mascots of the Summer and Winter Olympics. 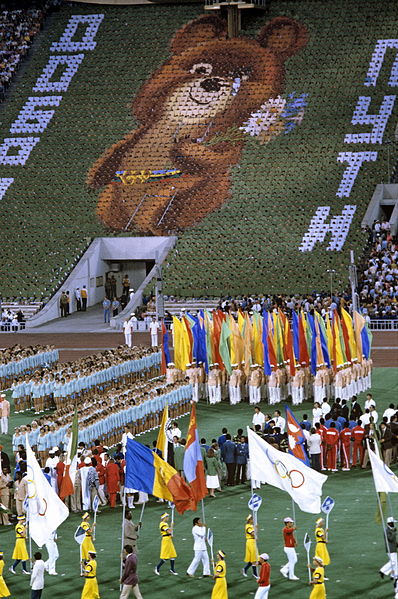 The United States, of course, boycotted the 1980 Summer Olympics. We said it was about hostages or something, but I have a hunch that we just wanted to get as far away as possible from Misha, the calmly unsettling bear. Look at him up there, winking at you and carrying some flowers for you. He maybe wants to get to know you better, yes? You come over, maybe have some wine? We make good friends you and I, yes?

Go away, Misha. You are a creep. 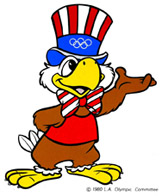 Sam isn't really "terrifying" in a traditional sense, but boy did the United States go all-in on a mascot for their first go-round of hosting the Summer Games. This halter-top-wearing, pantsless glad-hander was designed by the Walt Disney Company, because of course he was. Can you imagine us hosting the Olympics in the 1980s and NOT showing up with a Walt Disney-designed mascot? We'd be the laughingstock of the world!

I don't have any idea what Sam's voice sounded like, but I'm guessing it was somewhere between Colonel Sanders and Paul Newman. You know who should have voiced this character, though? Richard Simmons. Take a look at Sam. Now imagine him talking in Richard Simmons' voice. You're welcome. 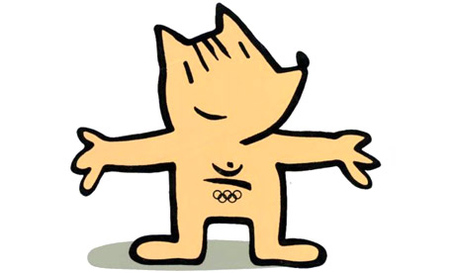 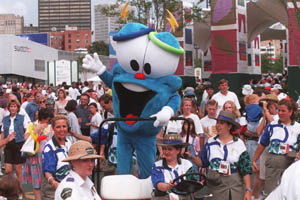 Ah, yes. No list of questionable Olympic mascots would be complete without mentioning Izzy. In every possible way, he was the Microsoft Talking Paper Clip of Olympic mascots and pretty much the embodiment of the creative process that goes into designing one.

I see you're trying to create an Olympic mascot! Have you tried chugging cough syrup and watching Yellow Submarine? 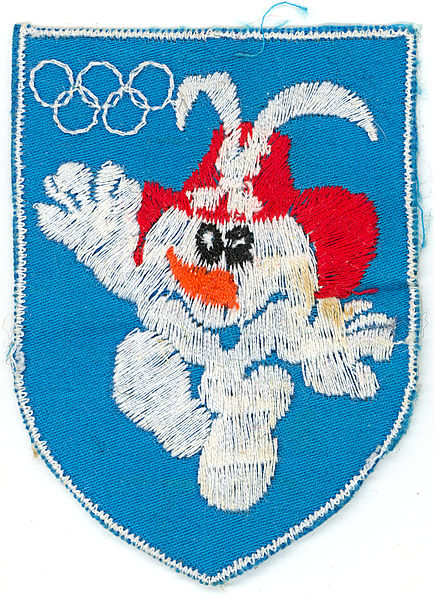 Schneemann (fighter of the Night Man) is proof that even way back in 1976, the Olympic mascot design people didn't have a firm grasp on sanity. It's just a snowman head with arms and legs stuck onto it. The plush version is especially chilling. This is something that not even Calvin would make out of snow to annoy his father.

I don't know what horrible sorcerer did this to you, Schneemann, but we will do our best to avenge you. 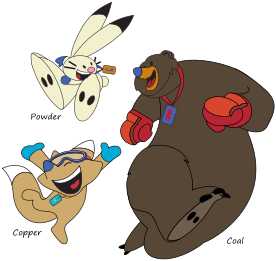 I'm not sure why it's so much more terrifying to put a bear in MMA gloves than to just have him maul you with his fearsome claws, but there you have it. Powder and Copper look pretty benign and excited to be here, but Coal is cackling at your misfortune as he rears back to let fly with a Superman punch that is just going to obliterate you. And then he will maul you and feast upon your bones. 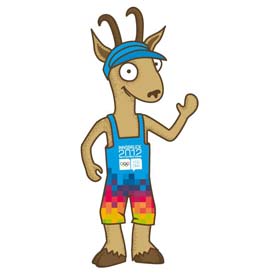 Hoo boy. "Yoggl" is apparently pronounced "YOG." He is also apparently a mash-up between Progressive Flo, a Sherwin-Williams commercial and the cast of Bob's Burgers. Are you welcoming me to the Winter Youth Olympics or to the paint section at Lowe's? Because either way, I'd ... uh ... I'd like to speak to someone else. Please. 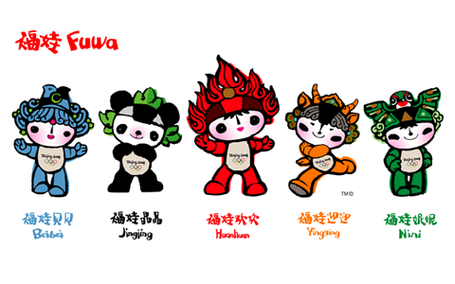 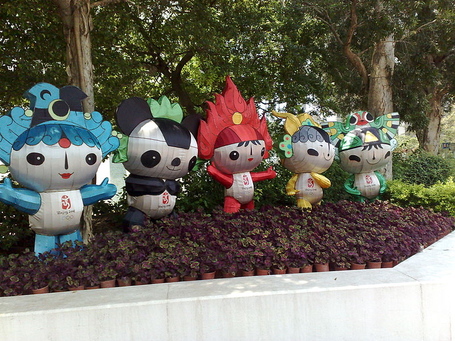 Yeah sort of a Teletubbies-meets-"It's a Small World" sort of thing. Pretty cute overall. Let's see how this translates to the actual mascot costumes? 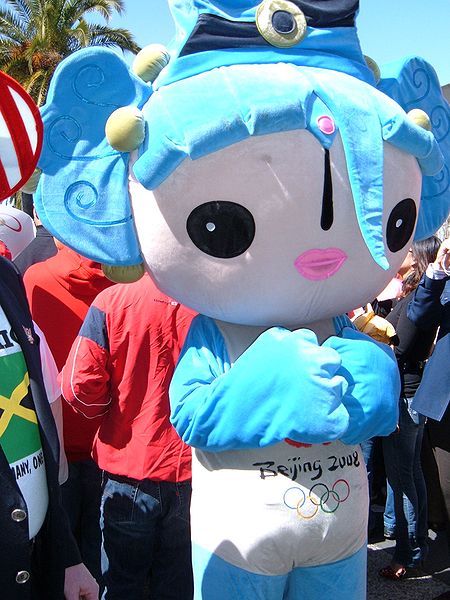 Oh no. Oh dear god, no. You have created an eight-foot-tall plush person with sewn-on Angelina Jolie lips, elephant ears and a devilock. WHAT IS WRONG WITH YOUR HANDS? Wh-- why does it look like that where your crotch meets your legs? What is happening? WHAT IS THAT? 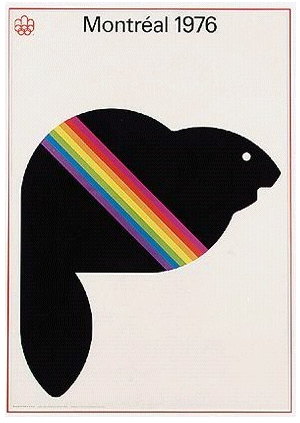 This is supposed to be a beaver. Nietzsche's approximation of a beaver, maybe. They were in Canada and all they could think of was to slap a legless, toothless art-deco beaver onto the programs. I guess they're lucky they didn't wind up just going with their first idea, "Syrupy, the Maple Syrup Bottle." 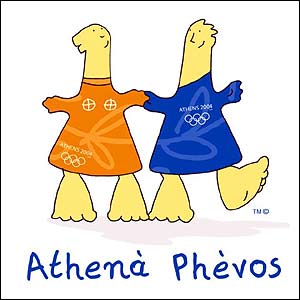 This looks like one of those weird "adult comic strips" that you might nervously leaf through in the "sex" section of a library or bookstore when you're in grade school. It also kind of looks like if Keith Haring drew a guest strip of "Life in Hell." Either way, this is so, so weird. Two bizarre, bottom-heavy weirdos with five-inch arms holding hands and stumbling around Athens together. If you saw these things out on the street you'd have to admonish your children not to openly gawk.

Don't stare, sweetie. They've just got their own thing going on. 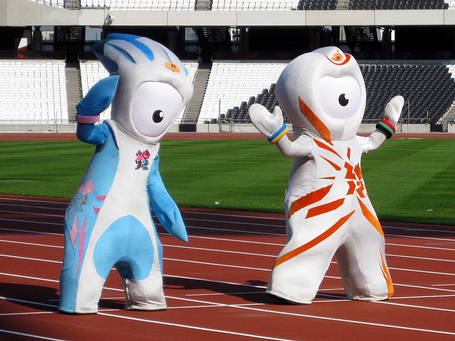 And here we have the current offenders, Wenlock and Mandeville. Two all-seeing cyclops with pincers for hands and stern looks on their faces. They have no mouths and one of them is insisting that his entire crotch area be highlighted, as to better draw the eye. They are absolutely two seconds away from unfurling a laser-beam blast from their forehead jewels and laying waste to Olympic Stadium. What they thought was a book containing Mandeville's name was actually a dusty cookbook called "How to make MAN into DEVILLEd eggs." 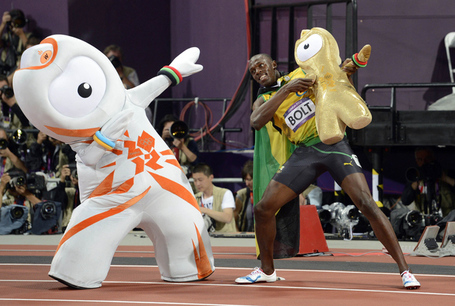 Well, on the other hand, maybe they're not so bad. 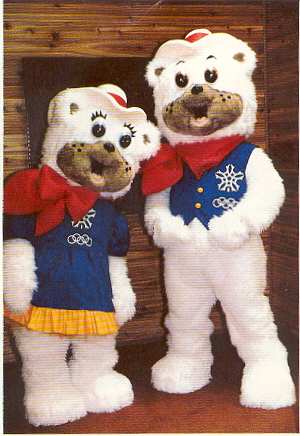 "What kinda eyes should we give these guys? Expressive? Welcoming?"

"NO YOU GOTTA MAKE THE MOUTHS WIDE OPEN SO PEOPLE CAN SEE THE TEETH AND THE TONGUE."

"REALLY GOTTA MAKE EM KNOW THAT BEARS WILL EAT YOU AT A MOMENT'S NOTICE."

"GOTTA BE EVER VIGILANT WITH THESE DAMN BEARS."

"VEST AND NO PANTS AND MAKE IT SNAPPY." 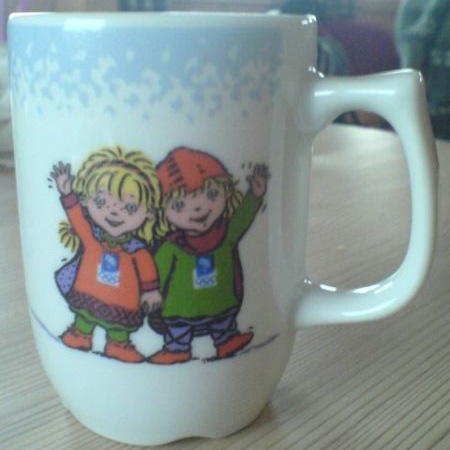 And of course, when Lillehammer got the Winter Olympics, they fell all over themselves trying to get ghastly children onto merchandise. Look at the horrifying Village of the Damned staring eyes. The disingenuous, pilled-up leering grins. The cavernous bags under their eyes. Imagine their anguished screams. Pray for the warmth of hypothermia to set in as their life ebbs away.

"Please help us. We have not slept for so long. The Olympics people, they sent us out into the wasteland in slippers and capes."

Shhhhh, Hakon. There, there, Kristin. It will all be over soon. Shhhhh. 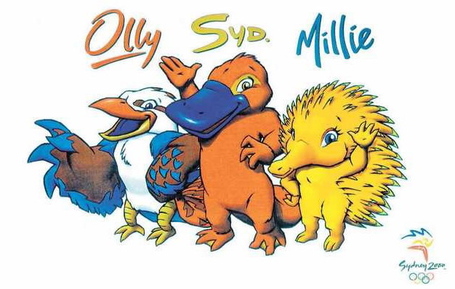 G'DAY! Pleased to meet you, Bruce! We're a kookaburra, a platypus and an unnecessarily sexualized, anthropomorphic echidna! Not sure why we had to make her sexy, but we did anyway! You're welcome.

The 2000 Sydney Olympics: pandering to the lucrative furry demographic before it was hip. (It's hip now, right?) 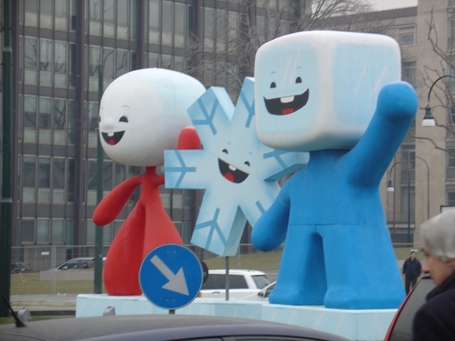 Torino (Ms. Turin if you're nasty) took a snowball and an ice cube and once again, totally unnecessarily, gave them teeth. Didn't need to do that. Not sure what you were trying to accomplish. Here's a picture of them dragging an unsuspecting fan back to their lair to snap his bones in half and sate themselves by sucking the delicious marrowbone jelly from within. 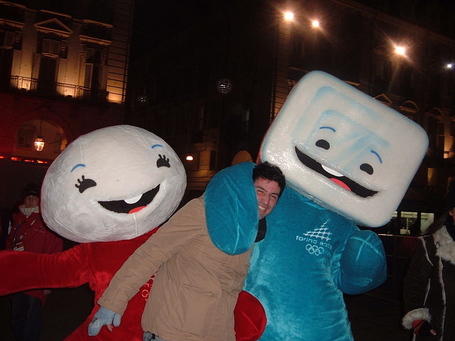 That poor, poor man. Your sacrifice will not be forgotten, friend. You gave your life so that everyone else could get the hell out of Torino while these two monstrosities slept off their demonic bloodfeast. Bless you, sir. Whomever you may be.

On the plus side, it's nice that Neve Campbell can continue to get work.