The tale of the World Series paper airplane(s)

Busch Stadium was under attack by pieces of paper Monday night.

Share All sharing options for: The tale of the World Series paper airplane(s)

I'm not an expert paper airplane constructor. No matter which form of paper airplane I constructed  -- a regular old triangle-shaped thing or a more advanced doohickey -- or how much effort I put in, it invariably took a nosedive instants after I threw it.

Which is why I want to highlight the effort of one -- or perhaps many -- St. Louis Cardinals fans, who broke the bounds of what I believed capable in the field of paper aeronautics.

In the bottom of the seventh inning, they tossed a paper airplane so far that it nearly reached the mound, which is I'd guess 100-ish feet from the closest part of the Busch Stadium stands. That's a long flight for a paper airplane. 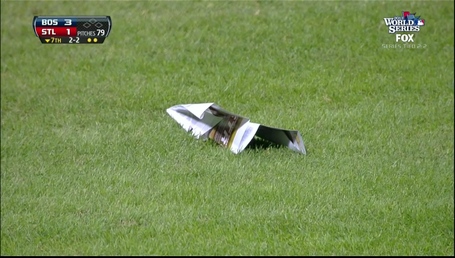 Jon Lester had to step off and retrieve it: 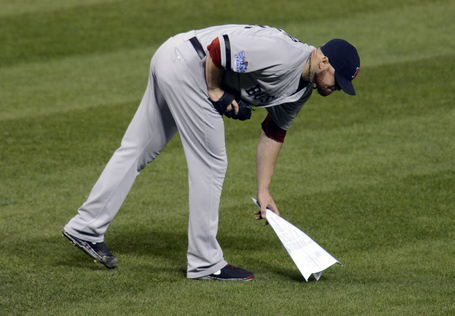 He gave it to a batboy named Greg. 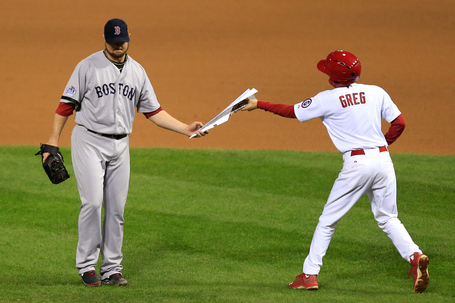 First of all, that thing is enormous. It's roughly as long as four of Lester's hands or one of Greg's arms. Greg has a really short arm. Was this made with construction paper, or perhaps some sort of malleable posterboard?

And there's clearly an advanced folding technique at work here. I think it most resembles "The Dart" in that comprehensive listing of paper airplane styles, but it appears to have an addition lower segment not included in standard airplane constructions.

Greg the diligent batboy went off with the enormous flying paper, and the game was underway. But we weren't done with the paper drone assault:

Incredible engineering, St. Louis fans. And now the series heads to Boston, where they could top this by having M.I.A. will sing the National Anthem before a fan throws a plane from the top of the Green Monster to the backstop.