Why does Delaware hate Ohio State so much?

Share All sharing options for: Why does Delaware hate Ohio State so much?

ESPN's SportsNation polls can be quite a bit of fun, either because they're surprising or because they reveal intra-national divides that conform perfectly to what you'd expect. Take, for instance, these two polls on Ohio State's merit as a top-two, championship-worthy team:

It's nearly perfect. With the exception of a few stragglers, that dissenting chunk is pretty much exactly the SEC, give or take a North Carolina. New Mexico and Maine sometimes don't care. Vermont is surprisingly pro-Auburn, and Michigan actually sided with Ohio State as No. 2 (which they are), but it's otherwise SEC vs. everyone ... with one consistent exception: 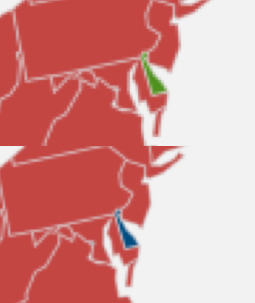 WHAT THE HELL, DELAWARE!? What do those meddling muskrats have against the Buckeyes? Is there some rivalry we don't know about? Is this some beef over which side of the Pennsylvania border is cooler? Is this just Joe Flacco voting thousands of times? Is this a Joe Biden-driven White House conspiracy? Is it Robert Gore, the inventor of Gore-Tex? It's probably Robert Gore, the inventor of Gore-Tex.

Or is it just football? What could the Blue Hens have against Ohio State? It's not like they have anything in common with any of Ohio State's major riv-- OH. OH MY GOD:

HELMET STRIPE BROS VS. THE WORLD!